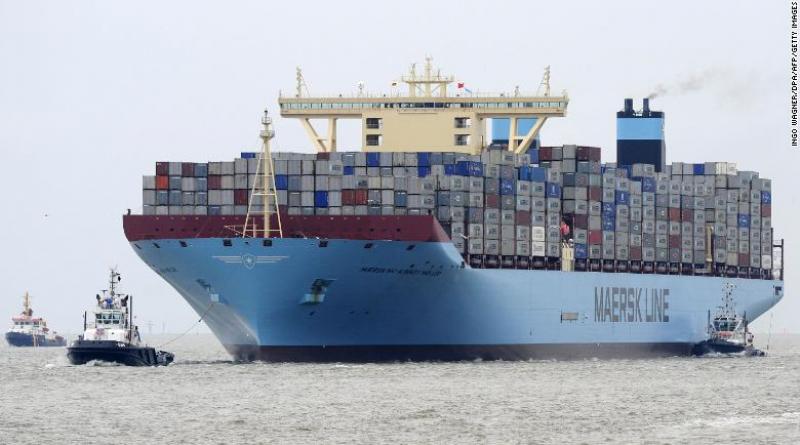 Maersk (AMKBY), which is based in Denmark, said it's aiming to become carbon neutral by 2050 and is urging other shipping companies to do the same and help it develop the technology for a new generation of vessels.

"This is a call for action," Maersk Chief Operating Officer Soren Toft told CNN's Richard Quest on Tuesday, describing climate change as "one of the most significant issues facing the planet."

The shipping industry "will need to find new technologies, new innovative ways of basically providing the future efficient ships," Toft said. "These ships are not available today, and that's why we are reaching out."

The shipping industry burns huge quantities of heavy fuel oil and is estimated to account for roughly 2% to 3% of global greenhouse gas emissions, according to the International Maritime Organization (IMO).

That compares to roughly 3% generated by international aviation and 11% by agriculture, according to 2014 data from the European Environment Agency. In April, the IMO pledged to reduce the industry's annual emissions by at least half by 2050.

But Maersk is pushing for it to go much further.

"It's vital that we find solutions for this problem," Toft said. "We want many future generations to have a healthy and peaceful existence on this earth."

The company believes the next 5 to 10 years will be crucial to carrying out the research and development needed to get environmentally friendly container ships on the seas by 2030.

Maersk has invested $1 billion over the past four years in energy efficient technology but says it can't make the new ships a reality on its own.

"We can only do this when we work together," Toft told Quest.

British engine maker Rolls Royce (RYCEY) said in August that it had developed a lithium-ion battery system for ships that would help reduce emissions.

But Maersk's giant cargo vessels, which carry thousands of containers over thousands of miles of open ocean, will need entirely new technology in order to meaningfully cut carbon emissions or eliminate them entirely.

The shipping company says it plans to start a dialogue next year with "all possible parties" — including cargo owners, investors, lawmakers and technology developers — to start working on the challenge.

Ivana Kottasova contributed to this article.