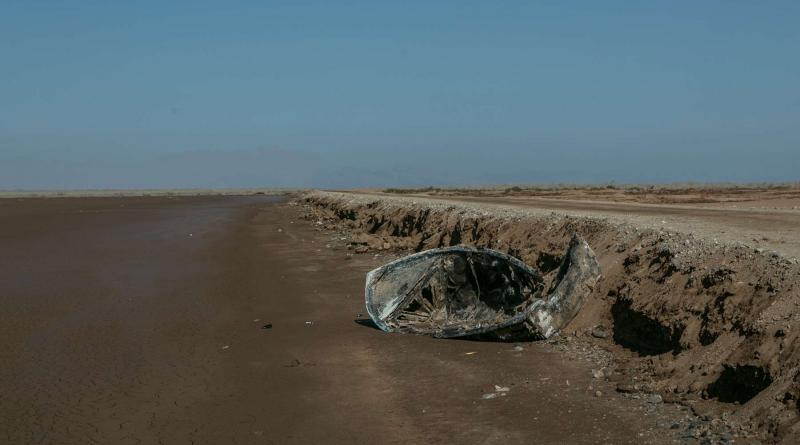 Mexicans fight for mighty waterway taken by the US.

The Colorado River serves over 35 million Americans before reaching Mexico – but it is dammed at the border, leaving locals on the other side with a dry delta.

he temperature is rising toward 45C (113F) as young brothers Daniel and Dilan Rodríguez skip towards a bridge over the Colorado River in the Mexican border town of San Luis Río Colorado. But there is no water flowing through the channel of one of the world’s mightiest waterways. The pair run down the river bank and cheerfully splash through stagnant puddles dotted about the riverbed.

“We wish we had a river, so we could swim, and jump and sail my cousin’s boat,” said Daniel, 12. “At least we have puddles to make mud balls, that can be fun.”

The Colorado originates in the Rocky mountains and traverses seven US states, watering cities and farmland, before reaching Mexico, where it is supposed to flow onwards to the Sea of Cortez.

Instead, the river is dammed at the US-Mexico border, and on the other side the river channel is empty. Locals are now battling to bring it back to life.

There are few more striking examples of what has come to be known as “environmental injustice” – the inequitable access to clean land, air and water, and disproportionate exposure to hazards and climate disasters. Water in particular has emerged as a flash point as global heating renders vast swaths of the planet ever drier.

Today the Guardian is launching a year-long series, Our Unequal Earth, to investigate environmental inequalities and discrimination in the US and beyond. It will also reveal how the climate crisis is making things worse for activists and scientists on the ground.

“We’ve heard stories from my mum about how she used to play and swim in the Colorado River when she was little, but we’ve never experienced it,” said Evelin Bautista, 14, who is a member of an indigenous tribe, the Cucapá, which means the River People. “I’ve heard that over the border, the water is so clear that they can even see the fish.”

Indeed, a mere 30 miles north, over the border at Gateway park in Yuma, Arizona, siblings Damien Navarro, 12, and Dariana, eight, spent the day fishing, diving and swimming in the free flowing river.

“It’s so hot, we come here all the time, the kids love the water, and we often catch catfish, bass and bluegill,” said their father, David Barraga. “I didn’t know there’s no river in Mexico. Wow, that’s a shame.”

“At school in science we’ve been learning about drought, that the planet is getting hotter,” said his son, Damien. “But we’ve never been told about the dam or the river in Mexico, maybe when we’re older. It’s really too bad for those kids.”

The 1,450-mile Colorado is one of the world’s most developed and regulated river systems, and an essential water source in an arid region. The battle for its riches - and the story of its demise - goes way back. (Pictured: Yuma Gateway Park, Arizona) 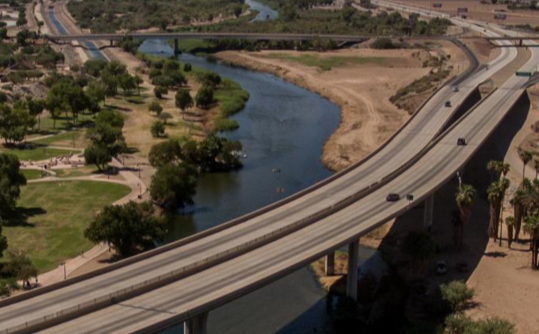 In the 19th century, the river flow in Mexico was over 1,200 cubic metres per second. Then the US began taking control of the Colorado and turning a desert into an agricultural heartland. 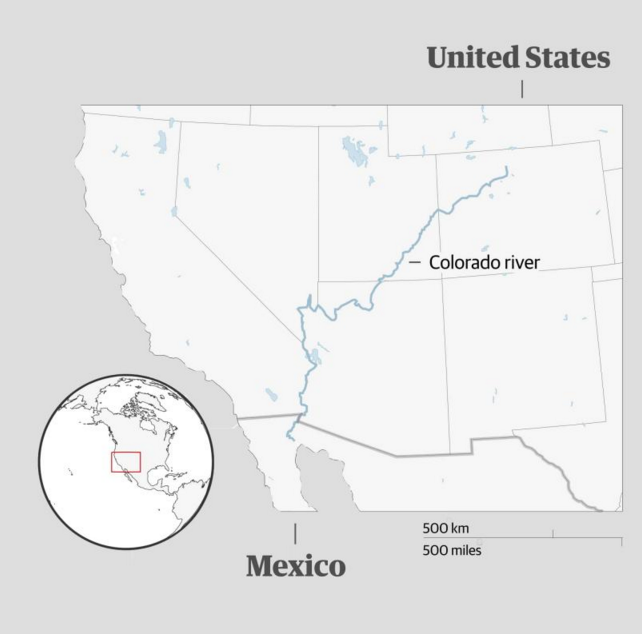 In 1901, the US built the Alamo canal through Mexico, which diverted river water to farmland in California's Imperial Valley. Across the border, ambitious American businessmen, aided by corrupt Mexican officials, took control of most arable land and water. 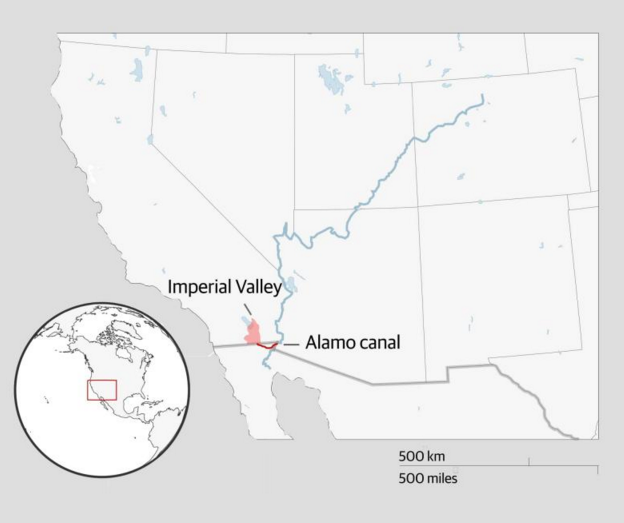 Construction of the Hoover dam in 1936 reduced the river flow in Mexico to 164 cubic metres per second. 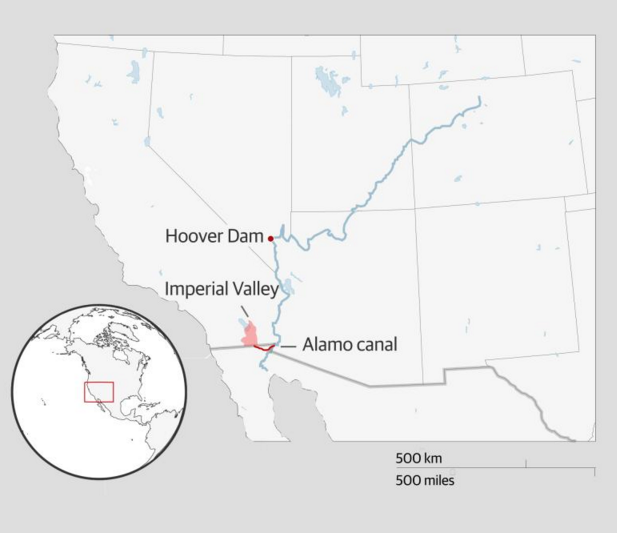 In 1942, the US constructed the All American canal, bypassing Mexico to directly supply the Imperial Valley and surrounding cities. 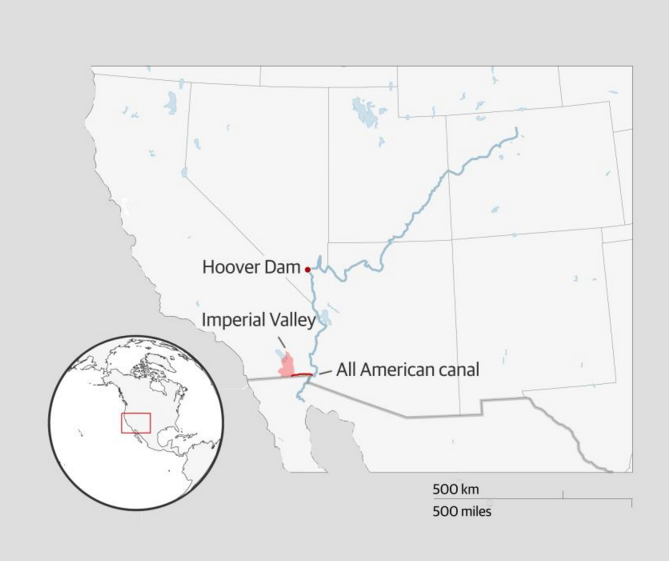 The Colorado's demise was sealed in 1944, when Mexico and the US signed an agreement to construct the Morelos Dam at the border and guarantee water to Mexico only for agriculture. After the Glen Canyon dam was built in Arizona in 1966, river flow in Mexico plunged to 8.3 cubic metres per second 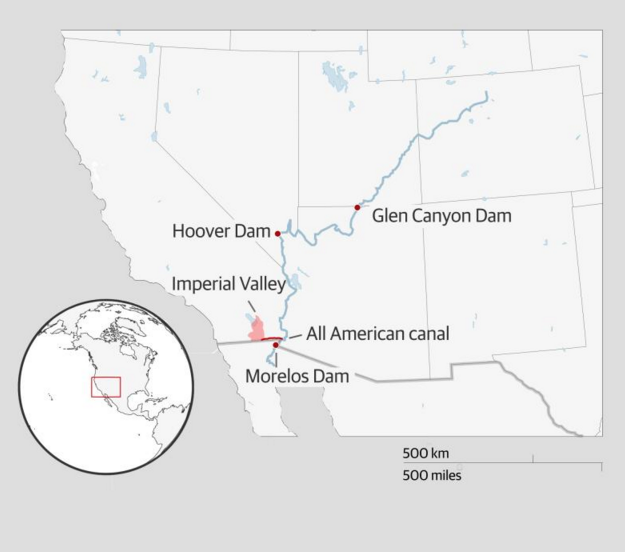 By the 1980s, 80% of the delta’s forests and wetlands were lost and the estuary partially destroyed, with devastating results for marine life, migratory birds, mammals and indigenous communities.

The river has not flowed to the sea since 1998, apart from a few days in 2014 during an ecological experiment that simulated spring floods, aiding natural germination and increasing bird numbers by 43%.

Currently the river flow in Mexico is 0.5 cubic metres per second, a fraction of what it once was. Another pulse flow to help restore the river’s estuary and wetlands could happen in 2021/22.

‘It took away part of our identity’

Because the 1944 treaty did not allocate Mexico any water for the river itself, the channel is mostly dry. The loss of the river in Mexico has been devastating.

Nancy Saldano, 54, an architect and activist in the Sonoran town of San Luis Río Colorado, recalls boat rides and fishing with her family during the 1980s, when the US occasionally released “extra” water to deal with heavy snow and rain that risked overwhelming its dams. Her mother, an evangelical pastor, conducted baptisms in the river until it disappeared.

“Taking away the river had a huge impact on us, it took away part of our identity. I felt anger, sadness and grief. My children had never seen the river flow.”

The disparities on both sides of the border are stark.

In the US, the Colorado serves more than 35 million people, including several native tribes, seven national wildlife refuges and 11 national parks, and supports $26m tourism and recreational industries, as well as farming. California has rights to the largest quantity, with 4.4m acre-feet per year – or 29% of the total – while Utah is allocated 1.7m and Nevada 0.3m.

At the Morelos dam, located between Los Algodones, Baja California, and Yuma, Arizona, the river is diverted to a complex system of irrigation canals which nourish fields of cotton, wheat, alfalfa, asparagus, watermelons and date palms in the vast surrounding desert valley. This is good for farmers – and less so for ordinary Mexicans.

Following the dry riverbed south towards the Gulf of California evokes an eerie sadness. The sound of gunfire in one wide, dusty section led to a couple from San Diego hunting wild pigeons, and a bucketful of feathered corpses. A few miles west along dirt farm roads, dozens of herons, egrets and ducks were staking out a wonderfully lush wetland – though it is only an accidental byproduct created by agricultural runoff from surrounding wheat and alfalfa fields.

The Colorado basin is one of 276 watersheds that cross international borders and Mexican supporters of the binational treaty argue that it resolved longstanding diplomatic disputes and enabled the region’s economic development, even if there is mostly no longer a river in the channel.

“We’re the only place in Mexico with a secure water supply, that is a privilege,” said Francisco Bernal, the International Boundary and Water Commission (Cila) representative in Mexicali.

But the treaty didn’t foresee prolonged drought, global heating and mounting demands. Now, water is running out, and things must change.

The population of Baja California grew from 1.67 million in 1990 to 3.5 million in 2018. Most of the river water still goes to farmers. Groundwater reserves are dwindling, pollution goes unchecked, and urban neighborhoods face shortages.

“If agriculture was forced to be more efficient there would be enough for everyone else,” said Dr Jorge Ramírez, a leading water scientist at the Autonomous University of Baja California. “We have enough water, what we lack is planning. Water is the currency here and politics always wins.”

In recent years, protests have erupted in response to allegations of corruption and poorly policed pollution standards that favor big landowners and water guzzling industries, such as a controversial US brewery under construction in the Mexicali valley.

In 2020, both countries will for the first time implement rationing. Mexico must cut usage by 3%. The US must save 247m cubic metres. The plan would have been much stricter if not for record snowfall in parts of the Colorado basin last year. The reductions can only be accomplished if farmers waste less and participate in reforestation efforts.

Even so, scientists are optimistic that the delta can partially recover.

‘The Gabachos [Americans] should leave some water for us’

In the scorched and barren delta, visitors may encounter an incongruous sight: 700 acres of flourishing native trees and shrubs in three reforestation sites.

They are the product of what is called a “pulse flow”.

In 2014, an environmental experiment driven by not-for-profits on both sides of the border resulted in 105,392 acres-feet (130m cubic metres) of extra water being released into Mexico over two months, simulating the natural spring floods of yesteryear.

The pulse flow bolstered parched wetlands and reforestation zones where native cottonwood and willow trees naturally germinated. And for a few days, for the first time in years, the river reconnected to the Sea of Cortez: fish stocks increased, dolphins returned and the number of migratory birds rocketed by 43%.

But for some scientists, the community response was perhaps the most surprising and satisfying. Thousands flocked to the river as it returned, briefly, to its former glory.

“I grew up with my mum’s stories about the river in the old days, but couldn’t believe it until I saw it myself,” said Ulises Monroy Saldaña, 13. “I’ll never forget putting my hand in the water for the first time: it was cold, but it felt so nice because it was so hot here.”

Daniel Rodríguez was just seven years old, but still remembers the excitement of watching the river fill with water. “We’d come every day after school and keep jumping off the bridge until the police chased us away.”

His grandmother, Lupe Aderete, 53, set up portable toilets for the massive influx of visitors. “It was beautiful to see the river alive again, everyone was so happy, and I made some extra money.” She added: “It’s not fair, theGabachos [Americans] should leave some water for us.

The restoration site at Laguna Grande is a shady oasis of gangly cottonwood and willow trees surrounded by desert and farmland, visited by over 2,000 people last year.

“For most children, it’s the first time they’ve seen a forest, and for the adults it brings back memories. Connecting to nature is emotional, and visitors cry all the time,” said Gabriela González, education coordinator at the Sonora Institute which runs Laguna Grande.

There’s little or no chance that the river will ever flow freely again, but plans are afoot to repeat the pulse flow, this time flooding only the spots which most benefited last time. And there is hope of expanding native forests to create a green corridor with wetlands and lagoons channelling into the sea.

An indigenous community, the Cucapá, has been involved in dredging efforts, paid to shovel out thick mud to create connectivity channels that are crucial to sustainable ecosystems. Patches of native salty grass and flocks of raucous brown and white pelicans at the lower part of the estuary indicate that plentiful fish were swept in by recent high tides.

The next pulse flow should take place in 2021 or 2022. Regardless, this region will remain more desert than delta.

At home in Miguel Alemán, a poor makeshift neighbourhood with little shade, the Rodríguez brothers ditch their school stuff, grab a plastic bucket and rush back across the parched terrain to the concrete drainage canal running parallel to the littered riverbed.

They fearlessly dive into the polluted waterway, which emerges under the metal border wall, to cool down and catch some fish for dinner.