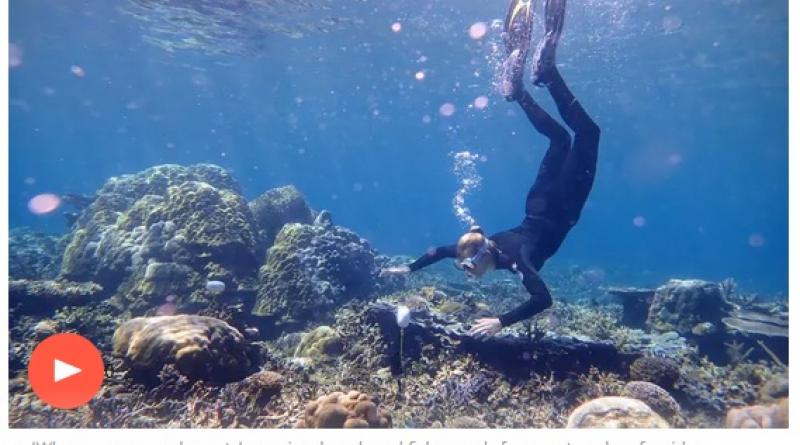 From whoops to purrs, snaps to grunts, and foghorns to laughs, a cacophony of bizarre fish songs have shown that a coral reef in Indonesia has returned rapidly to health.

Many of the noises had never been recorded before and the fish making these calls remain mysterious, despite the use of underwater speakers to try to “talk” to some.

The reef had been devastated by blast fishing, where explosives are used to stun or kill everything in the area. The corals are now being restored, but the scientists wanted to know if the many other creatures that inhabit reefs were also returning.

Visual surveys miss camouflaged animals and those that come out only at night, so the researchers turned to the noise of the reef. They found the vibrant soundscape was close to those of reefs that had never been damaged.

Sound is vital for reef survival, because almost all of its inhabitants, from corals to crustaceans to fish, produce offspring that spend the early part of their lives in the open oceans, before using sound and other cues as a homing beacon to return.

Tim Lamont, at the University of Exeter, UK, and the lead author of the study, said: “Working on underwater sound on coral reefs has often been quite miserable. We’ve been listening to reefs going into silence as they degrade. But this restoration site was exciting and inspiring, because the change was going in the other direction.”

There were many projects regrowing corals around the world but the return of a diverse array of creatures in this case showed it was more than “a coral gardening project”, according to Lamont.

“Furthermore, as we listened through these hours and hours of recordings, we kept discovering sounds we had never heard. Some were a bit familiar but some were just like, ‘I have no idea what that is’. It was a real sense of adventure and discovery,” he said.

“The foghorn one really blew our minds. I got really enthusiastic about trying to work out exactly what fish was making it. So I downloaded the noise on to an MP3 player, and got an underwater speaker, the type synchronised swimmers use.

“I was swimming around blasting it out, trying to get a call and response going. I thought I got it replying a few times, but I never saw the fish itself swim out to meet the call. So the mystery continues.”

Lamont suspects it may be a type of toadfish, based on other recordings from the Caribbean.

Prof Steve Simpson, at the University of Bristol, UK, and part of the team, said: “Some of the sounds we recorded are really bizarre. We still have a lot to learn about what they all mean and the animals that are making them. But for now, it’s amazing to be able to hear the ecosystem come back to life.”

The world’s scientists have warned that global heating of 2C could cause warm-water corals to be bleached into extinction. As well as being a catastrophic loss of biodiversity, this would destroy the livelihoods of the hundreds of millions of people who rely on reefs for food, income and storm protection.

The new study, published in the Journal of Applied Ecology, analysed about four hectares of recovering reefs at the Mars Coral Reef Restoration Project in the Spermonde archipelago in central Indonesia. Here, small pieces of live coral have been attached to star-shaped metal frames, which were placed in the rubble field left by the blast fishing.

The researchers compared areas one to three years into recovery against areas still degraded and areas that had never been damaged. They found most of the noises recorded were at least 50% more frequent in the healthy and restored habitats.

A computer-generated measure of the complexity of the soundscape also showed the restored reefs were similar to the undamaged ones, suggesting a healthy and functioning ecosystem, the team said.

While the specific organisms making the noises were not identified, some types of sound had previously been ascribed. Whooping sounds have been linked to the Ambon damselfish, growls and grunts with soldierfish, and knocking sounds with triggerfish. But the laugh sound was new to science. Noises can come from fishes’ drum-like swim bladder, their throats or from teeth being banged together.

“​​We were surprised to see such a holistic recovery of the reef in such a small amount of time,” Lamont said, adding that a complete recovery would take longer, to allow rarer slow-growing corals to return.

“The manual listening took months and months,” Lamont said. “I could only do it about an hour at a time, because it’s just such a bizarre thing to do, to sit, close your eyes and listen to these chirps, pops and whistles.”

The blast fishing in the area has been replaced by sustainable community management. But Lamont said: “Restoration is not a solution that means we don’t have to worry about all the threats to the world’s reefs [such as the climate crisis and water pollution].

“If we don’t address these wider problems, conditions for reefs will get more and more hostile, and eventually restoration will become impossible.”