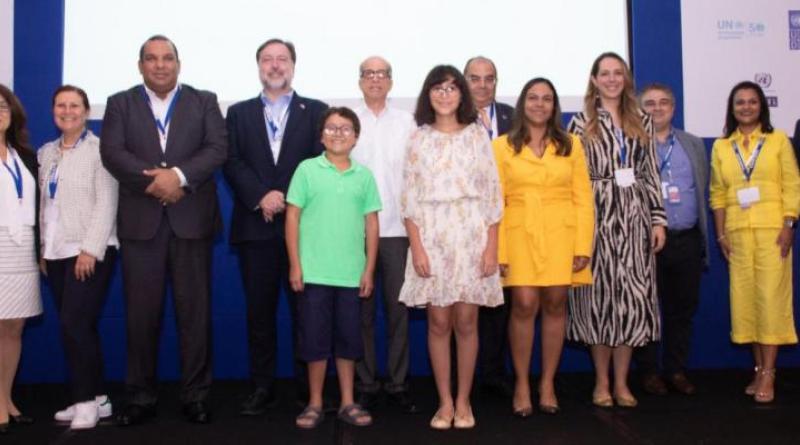 UN Climate Change News, This year’s Latin America and Caribbean Climate Week (LACCW 2022) in Santo Domingo wrapped up today, having helped build crucial regional momentum in the fight against climate change ahead of the UN Climate Change Conference COP27 in November. The event brought together more than 1,700 participants, from governments, multilateral organizations, the private sector and civil society, for more than 160 sessions, ranging from climate finance to building resilience to climate change.

The Dominican Republic’s Environment Minister Miguel Ceara Hatton said: “To tackle the ongoing environmental crisis it is necessary to join forces and attract many more allies to this fight and have the responsibility to move towards a social and economic transformation based on sustainability and resilience. This Climate Week has been an opportunity to engage with allies and develop the strong partnerships needed to realize truly transformative change. We welcome this step down the road to COP27 and the opportunity to set the course for a better future here in the region together.”

The final day of the meeting coincided with the launch of a report by the World Meteorological Organization on the state of climate in Latin America and Caribbean.

The UN report warns that deforestation rates in the region are the highest since 2009, Andean glaciers have lost more than 30 percent of their area in less than 50 years and increasing sea-level rise and ocean warming are expected to continue to affect coastal livelihoods, tourism, health, food, energy, and water security.

UN Climate Change Deputy Executive Secretary Ovais Sarmad said: “This meeting has helped build awareness for accelerating climate change in the Latin American and Caribbean region and strengthened regional collaboration. We've seen inspiring examples of governments and non-Party stakeholders stepping up their resilience planning and grasping opportunities of the green economy. I'm encouraged to see how all regional stakeholders are embracing the implementation of the Paris Agreement. The opportunities are there, now it is a matter of securing the necessary support and continuing to lay the ground for success at COP27 in Egypt.”

Global greenhouse gas emissions need to be halved by 2030 for the international community to stand a chance of achieving the Paris Agreement goal of a maximum 1.5 degrees Celsius average temperature rise. Rapidly scaling up renewable energy, coupled with energy efficiency, is the most important means to reaching the 1.5 degrees goal.

In Santo Domingo, the Inter-American Development Bank (IDB) presented its roadmap to accelerate inclusive and sustainable development in Latin America and the Caribbean. Globally, each year USD 5 trillion in investments are needed by 2030 for clean energy alone. According to the IDB, the decarbonization of economies In Latin America and the Caribbean could save more than USD 600 billion per year by 2050.

The COP27 and COP26 Climate Champions Dr. Mahmoud Mohieldin and Nigel Topping convened government representatives and non-Party stakeholders to identify solutions to build resilience to climate change. Turning pledges into action, as well as mobilizing finance play a key role in this. For example, they spoke about how nature-based solutions such as restoring mangroves and building infrastructure to strengthen coastal resilience can be deployed, in addition to accelerating efforts to curb greenhouse gas emissions from cities, regions and communities.

In Santo Domingo, Dr. Mahmoud Mohieldin said: “Our engagements at the Latin America and the Caribbean Climate Week have been an opportunity to showcase how climate action can be regionally advanced. Non-state actors come in all shapes and sizes, from small NGOs working in villages, to big global investment banks and CEOs and think tanks. We’ve been engaging with all of them. What we are also seeing is a special focus on adaptation, and on climate finance, much of which will need to come from the private sector.”

At the end of LACC 2022, Deputy Minister for Climate Change and International Affairs of the Dominican Republic Milagros de Camps handed a letter with key regional conclusions of the meeting to Dr. Mahmoud Mohieldin, who was representing the COP27 Presidency at the meeting. A detailed LACCW 2022 outcome report will be shared by the COP27 Presidency with governments meeting in Sharm el-Sheikh to guide implementation of the Paris Agreement.

Dr. Max Puig, Executive Vice President of the National Council on Climate Change of the Dominican Republic, said: "The Latin American region is not known as a region that has the most financing available for climate action or economic resources in general. However, this is the region of solutions and we have the desire to solve problems. We are rich in fertile land, in sun, in ecosystem resources and in creativity for technological innovation. And taking the solutions as a starting point, we know that solutions to climate change have social transformation as a key component. We are going through significant changes in the ways our societies production and consume. The time to see ourselves as victims of climate change is over, and the time has come to take the helm of the ship. Much has already been agreed and set out in written agreements, and in view of the commitment we have with the Egyptian presidency of COP27, it is time to act. It must be clear to our peoples and to the world that we are serious and that, even in the most difficult circumstances, we are not going to stop taking action. We will overcome the difficulties. This is the message that Latin America and the Caribbean are taking to COP27 in Egypt."

The next Regional Climate Week this year will be Africa Climate Week 2022 in Libreville, Gabon from 29 August to 2 September.

All greenhouse gas emissions resulting from LACCW 2022 have been offset with the support of cement companies gathered under the umbrella of the Inter-American Cement Federation (FICEM), which is committed to the goal of achieving full carbon neutrality by 2050.

About LACCW 2022 and Regional Climate Weeks

LACCW 2022 is hosted by the Government of the Dominican Republic and organized by UN Climate Change in collaboration with global partners UN Development Programme, UN Environment Programme and the World Bank Group. Partners in the region include the Economic Commission for Latin America and the Caribbean (UNECLAC) the Inter-American Development Bank (IDB) and Euroclima LAC. LACCW 2022 is part of the Regional Climate Weeks 2022 series. MENACW 2022 kicked off the series in March in Dubai. The RCWs were strongly endorsed in last year’s Glasgow Climate Pact adopted at the UN Climate Change Conference COP26 November, which recognized the Climate Weeks as a platform for credible and durable climate action.

Visit www.regionalclimateweeks.org to explore the Regional Climate Weeks 2022 and see how they are making a difference on climate change in key regions. The hashtag for the meeting in #ClimateWeekLAC.

Information for the media