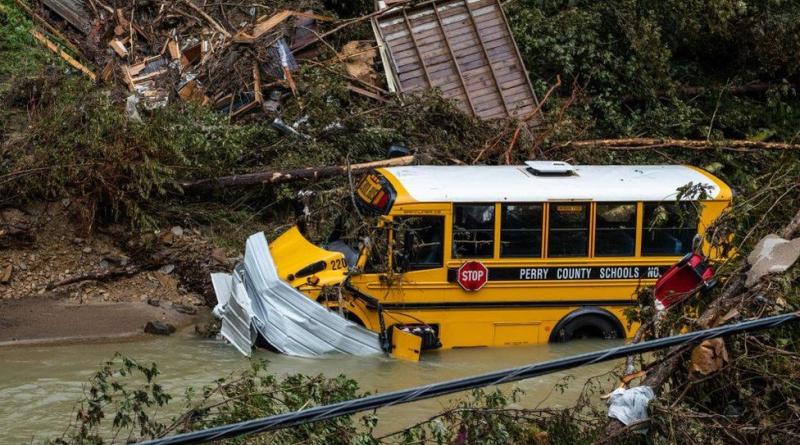 At least 37 people have now died in flash floods in eastern Kentucky, as the region braces for more rainfall.

At least six children - including four siblings, aged one to eight, who were reportedly swept from their parents' grip - are among the dead.

More than 12,000 households remained without power, and hundreds of homes and businesses have been flooded.

The damage to roads, bridges and other infrastructure will cost millions to repair, the governor said on Monday.

Mr Beshear, who toured some of the hardest-hit neighbourhoods over the weekend, said he had seen "houses swept away" and "schools ruined".

This is the worst flash flooding the region has seen in decades.

Mr Beshear called the deluge "the deadliest and the most devastating of my lifetime", adding: "If things weren't hard enough on the people of this region, they're getting rain right now."

Displaced locals have taken refuge in state parks, churches and mobile homes brought in by the state. Around 300 people are in shelters, officials say.

Many people "only have the clothes on their backs", Mr Beshear said. "Everything is ruined."

Overnight curfews have been declared in two devastated counties amid reports of "excessive looting".

"I hate to have to impose a curfew, but looting will absolutely not be tolerated," an official for Breathitt County wrote on Facebook on Sunday evening.

"Our friends and neighbours have lost so much - we cannot stand by and allow them to lose what they have left."

One of those dead was Eva Nicole Slone, 50, who had ventured out in the storm in Knott County on Thursday to check on an elderly neighbour.

Ms Slone's body was recovered the next day near her home, her daughter told the Lexington Herald Leader newspaper.

Four children - age two, four, six and eight - died in Knott County after their trailer home was swept away.

"They were holding on to them," the children's aunt told CNN, describing the moment they were torn from their parents' arms.

"The water got so strong it just washed them away."