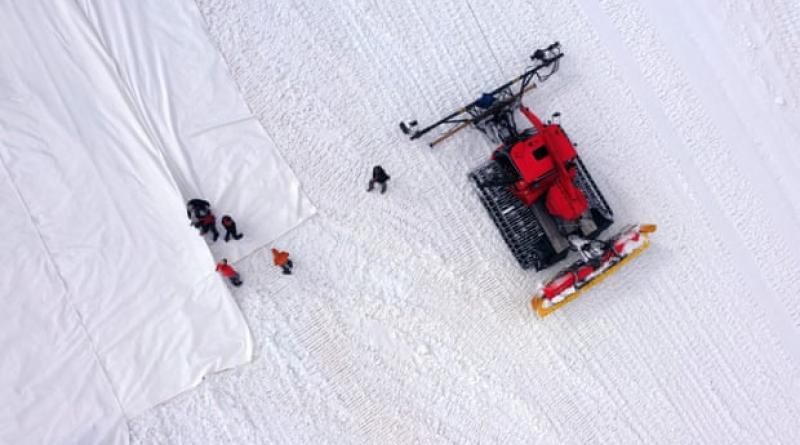 Every summer, the Presena glacier in northern Italy is protected from the sun with huge reflective tarps.

A vast tarpaulin unravels, gathering speed as it bounces down the glacier over glinting snow. Summer is here and the alpine ice is being protected from global warming.

In northern Italy, the Presena glacier has lost more than one third of its volume since 1993.

Once the ski season is over and cable cars are berthed, conservationists race to try and stop it melting by using white tarps that block the sun’s rays.

“This area is continuously shrinking, so we cover as much of it as possible,” explains Davide Panizza, 34, who heads the Carosello-Tonale company that does the work.

The coverings are “geotextile tarpaulins that reflect sunlight, maintaining a temperature lower than the external one, and thus preserving as much snow as possible,” he told AFP.

On the border between the Lombardy and Trentino Alto Adige regions, workers unroll the sheets in long strips, covering an area at an altitude of 2700-3000m.

They move methodically down the mountain under clear blue skies to pull the coverings taut, and sew them together to ensure warm drafts do not slip underneath. Bags of sand then act as anchors against the wind.

Once in place, the sheets, which measure 70m by 5m, are hardly distinguishable from the packed white snow beneath.

“There are glacier cover systems similar to ours on a few Austrian glaciers, but the surface covered by the tarpaulins is much smaller,” Panizza said.

The Austrian-made tarps cost up to €400 ($450) each and it takes the team six weeks to install them – and another six weeks to remove them before winter sets in again.

“When we remove them in September and we see that they did their job, we feel proud,” he says.