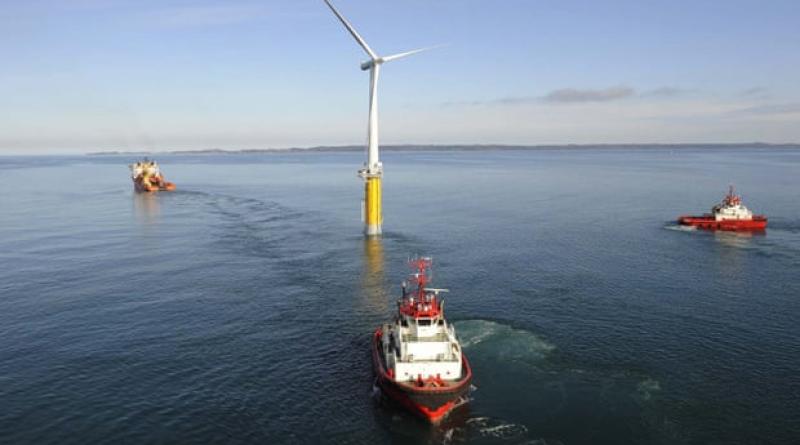 The government’s high-profile commitment to renewable energy could bring a decade of opportunities for young people.

The Hywind offshore windfarm stands 15 miles off the coast of Peterhead, and firmly on the cusp of Britain’s most dramatic energy revolution since the discovery of North Sea oil.

The world’s first floating windfarm was one of the first low-carbon energy projects developed by Norway’s state oil giant Equinor, and today is one of the best performing windfarms ever built.

“On a super-clear day you might just be able to make them out from land,” says Equinor’s Stephen Bull, of the turbines floating above the ageing crude oil pipelines which criss-cross the North Sea.

The government hopes that within the next 10 years there will be enough offshore turbines to power every home in Britain, including more world-leading floating windfarms.

Boris Johnson last week set out plans to use offshore wind power as the backbone of Britain’s carbon-neutral energy future, calling for 10 times the existing offshore wind capacity by 2030, or 40GW, including 1GW of floating turbines.

The plan to become the “Saudi Arabia of wind power” is one of the most ambitious British industrial endeavours since oil rigs began populating the North Sea in the 1960s. It will require the equivalent of one turbine to be installed every weekday for the whole of the next decade, and £50bn of private-sector investment.

But within the industry there is little doubt that it can be done. Investor appetite has been whetted by years of falling costs, guaranteed returns and growing political support. The sector has already exceeded expectations in recent years to emerge as one of Britain’s great modern industrial success stories – and it is ready to do so again. The catch? It needs government ministers to translate the rhetoric to reality.

“We are very keen on doing more floating offshore projects in the UK,” says Bull. “We absolutely welcome the 1GW target from the government, but we could easily get up to 2GW if we have the right government support.”

As part of the government’s plan, it has promised £160m to upgrade Britain’s ports to manage the giant turbine blades as they pass through on their way to sea. Better ports bring benefits to local communities and help to establish supply chains which can act as an economic multiplier for the benefits of offshore wind.

But the industry’s concerns centre on the government’s auction of project contracts, which guarantee a set revenue stream for their clean electricity via energy bills. The reverse auction has delivered record low prices which are unlikely to raise household costs. And the next one will be held in the spring. But there will need to be many more over the next decade to meet the government’s targets, and they will need to be far bigger too.

In return for having the gates opened to more offshore projects, the industry has promised to play a major role in the government’s bid to “build back better” from the coronavirus crisis as part of a green economic recovery. The upcoming auction alone, which will include onshore wind and solar power for the first time in four years, could secure more than £20bn of investment and create 12,000 jobs.

Jasmine Allen, 20, is an apprentice at SSE, which is building the world’s largest offshore windfarm alongside Equinor at Dogger Bank off the coast of Yorkshire. She is one of many young people entering the renewable energy industry for whom the government’s new offshore wind targets could guarantee a long-term career. “I think it’s fantastic,” she says. “I think it will open up new jobs, better the areas where the projects are, and create new opportunities for people to build careers.”

Increasing the pace and scale of project auctions also bolsters Britain’s burgeoning supply chain of manufacturers and engineers. They will have the confidence to make long-term investments, take on more work, and reap the benefit of a growing industry.

Eishar Bassan, 23, is a graduate trainee at Siemens Gamesa Renewable Energy, a company responsible for building some of the largest wind turbines in the world. She is working on the Neart na Gaoithe windfarm, about nine miles off the east coast of Scotland, where turbines with 80-metre-long blades will spin to generate enough electricity to power the whole of Edinburgh.

The prime minister’s offshore wind pledge was welcomed by colleagues, she says. “It’s ambitious, and really exciting. But there were also people being kind of cynical, like, ‘I hope the government actually pulls through and delivers’,” she adds.

Bassan is one of many young engineering graduates who have chosen to work in Britain’s renewables industry in part because it will help tackle the climate crisis and create a carbon-neutral economy by the UK’s target date of 2050.

“In 10 years’ time I definitely still want to be here, and be able to use what I’ve learned to help lead the development of these windfarms. It’s how I can help stop climate change.

“I’m just hoping that the government has some substance behind this plan, to actually execute the things they promise.”