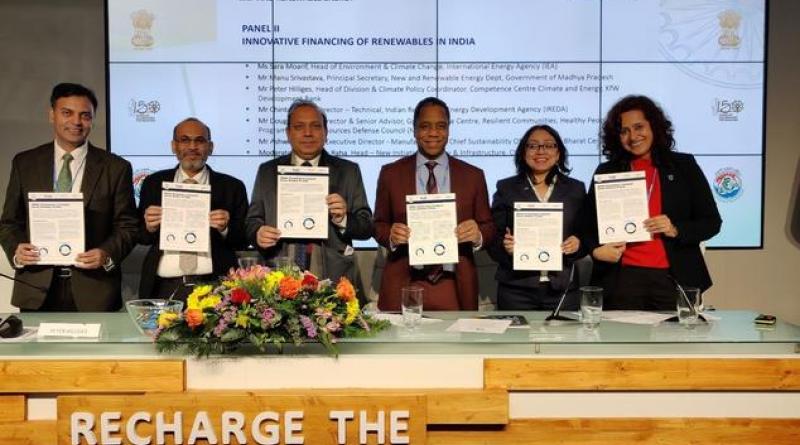 A green window is a financing approach designed leverage limited government funds to attract private capital to achieve climate and clean energy goals. The IREDA Green Window builds on the globally successful green bank model. Green banks across the world have supported projects worth $50 billion in the last five years.

The aim of the IREDA Green Window is to drive investment into underserved segments of the clean energy market. Under MNRE and IREDA’s leadership, the Green Window is based on extensive market research and stakeholder discussions involved in financing clean energy.

Speaking at a panel hosted by India’s Ministry of New and Renewable Energy (MNRE) at the 25th session of the UN Climate Conference (COP25) in Madrid, MNRE Secretary Anand Kumar focused on the purpose of the Green Window.

““Renewable energy is increasingly cheaper and better for the strategic interests of India, and the IREDA Green Window would provide a significant boost to the renewable energy market. As India moves towards becoming a USD 5 trillion economy, the country’s aim to install 450 gigawatts (GW) of renewable energy capacity would be one of the major drivers of its economic growth,” said Mr. Anand Kumar, Secretary MNRE

IREDA’s Director Chintan Shah focused on the first step for the Green Window—seed capital. During the discussions, he said that IREDA is discussing allocating approximately $20 million for the Green Window. With the seed capital, IREDA plans to leverage an additional $80 million from both domestic and international sources to establish a facility of $100 million.

MNRE Secretary Anand Kumar along with IREDA’s Chintan Shaw and knowledge partners NRDC and CEEW released a factsheet outlining the timelines and framework for establishing the Green Window.

Established in 1987, IREDA has played a significant role in mainstreaming renewable energy lending in India. However, despite the exemplary early growth in solar and wind over the last five years, the asking rate to meet the 450 GW of renewable energy goal, announced by Prime Minister Modi earlier this year, is much higher. India’s goal is more than five times the current installed capacity of renewables and would need massive new investment. To meet the challenge, IREDA plans to transform financing India’s clean energy markets by establishing the Green Window as a dedicated facility for developing catalytic risk mitigation and aggregation instruments.

NRDC and CEEW have been working with the Indian government on green catalytic finance for several years. Supported by IREDA, we developed a framework for the green window and at the 2018 RE-Invest, MNRE, IREDA along with NRDC and CEEW released an extensive issue brief, “Framework for Catalytic Finance”. In early 2019, along we deliberated with IREDA’s top leadership on the strategy for the Green Window. And, in September this year, IREDA, along with NRDC and CEEW held a working session for key IREDA staff to dive deeper into the Green Window mission and operational plan. Last year.

India is one of the top three nations leading global renewable energy growth. As of November 2019, India is about halfway to its 2022 target of 175 GW while aiming for higher goals of 450 megawatts by 2030. Achieving the 175 GW goal alone would increase clean energy access for millions of Indians and, additionally, could create up to 1 million job opportunities for over 300,000 workers by 2022, according to analysis by the Skills Council for Green Jobs, NRDC and CEEW. The IREDA Green Window will have a big impact in achieving the renewable energy goals and can play a transformative role in creating a self-sustaining financial ecosystem for clean energy in India.

The Ministry of New and Renewable Energy press release on the Green Windows announcement is available here: https://pib.gov.in/newsite/PrintRelease.aspx?relid=195728

India to invite bids from global coal miners before end of 2019.