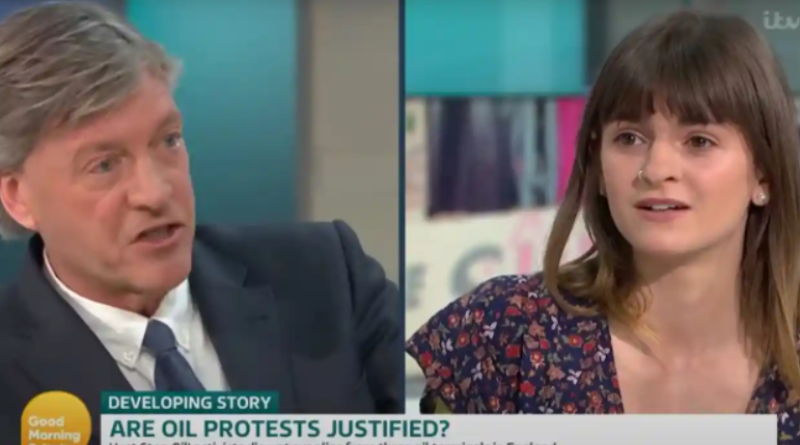 Ihadn’t seen the 2021 satirical film Don’t Look Up when I went on Good Morning Britain on Tuesday. I was there on behalf of Just Stop Oil – a group that has been engaging in direct action by blockading oil terminals. We’re demanding that the UK government ends all new oil licences, exploration and consent in the North Sea. It’s a simple message that’s in line with science.

But the simplicity of our demands seemed to annoy my interviewer, Richard Madeley. “But you’d accept, wouldn’t you, that it’s a very complicated discussion to be had, it’s a very complicated thing,” he said. “And this ‘Just Stop Oil’ slogan is very playground-ish isn’t it? It’s very Vicky Pollard, quite childish.” I then proceeded to talk about the recent report by the Intergovernmental Panel on Climate Change (IPCC), which confirmed that it is “now or never” to avoid climate catastrophe. But they didn’t seem to care.

People were quick to point out the parallels with a key scene in Don’t Look Up, when Leonardo DiCaprio and Jennifer Lawrence’s characters, both astronomers, go on a morning talkshow to inform the public about a comet that’s heading to Earth, potentially leading to an extinction-level event. The newsreaders don’t care about what they have to say: they prefer to “keep the bad news light”.

Now that I’ve watched the film, I understand the references people have been making. The worst part is that these presenters and journalists think they know better than chief scientists or academics who have been studying the climate crisis for decades, and they refuse to hear otherwise. It is wilful blindness and it is going to kill us.

The response to the interview on social media has been very supportive, but we need to translate that support into action. If the thousands of people on Twitter who disagree with Madeley’s approach joined the actions of Just Stop Oil, the possibilities for change would be endless. When the interview finished, I tried to speak more to Ranvir Singh and Madeley to stress how serious this is; Madeley just told me to be quiet and watched the weather presenter.

My fear is that they will only understand the reality of the climate crisis when it is on the doorstep, perhaps when the floodwater is uncontrollably trickling into their homes, or when they can no longer find food in the supermarkets. Maybe then the brutal reality of losing a “livable planet” means would actually sink in. Maybe then the journalists, presenters and climate delayers would think: “Oh, maybe we should have listened, done something.” And, of course, it will be too late.

Given the government’s inaction, which I believe will be judged as criminal in the near future, there are no longer any options left than to take clear direct action in the form of civil resistance. Some of my best friends are now preparing for their next action. This will be their fourth in 12 days, perhaps also leading to their fourth time sleeping in a police cell. They are between 20 and 23. They have degrees and jobs. They should be enjoying their final weeks at university and preparing to celebrate their graduation; instead, they are putting their bodies in the way to grind the distribution of oil to a halt. No matter what the government or the media say, these are good people who are terrified for their future. They are refusing to just sit by while their government pours more fuel on their dreams and lets them go up in smoke.

Civil resistance is really not about protests or marches, it is about responding to a situation beyond our worst nightmares. At Cop26, the people who run things effectively confirmed that they were going to let billions of the poorest people on this planet die in order to keep business as usual going.

Well, to that we say no. We will not continue as generations have before and allow our actions today to have devastating consequences on those tomorrow. It is time to break that cycle and stand up for what is right. “If governments are serious about the climate crisis, there can be no new investments in oil, gas and coal, from now – from this year.” That is a direct quote from Fatih Birol, executive director of the International Energy Agency. He said that last year. Time has quite literally run out. It only takes one quick search on the internet to see what is happening. Somalia. Madagascar. Yemen. Australia. Canada. The climate crisis is destroying lives already and will continue to unless we make a commitment to stop oil now.