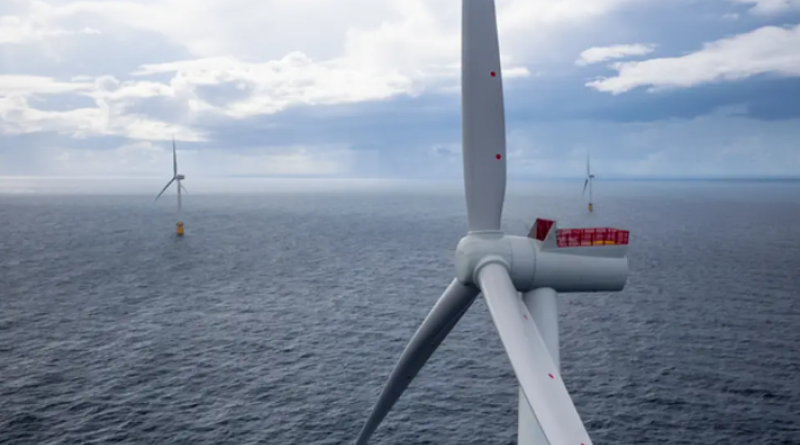 Fifteen miles off the Aberdeenshire coast at Peterhead, five truly enormous wind turbines are floating in the North Sea.

Standing at 175 metres (574 feet) above the surface of the water, and with a rota diameter of 154 metres, each extends a further 75 metres below the surface and has three suction anchors keeping them in place in the notoriously stormy waters.

Together they became the world’s first floating windfarm when they went into operation in 2017, and they have also become the most efficient turbines in operation around the British Isles.

The latest results from Norwegian company Equinor, which is the majority stakeholder in the farm, known as Hywind Scotland, shows that for a third consecutive year the farm has reached the highest “average capacity factor” of any windfarm in the UK.

In the UK, windfarms have an average capacity factor of around 40 per cent, and this figure is influenced by factors including wind speeds and direction, and turbine positioning,

But for the twelve month period to March 2020 the Hywind Scotland farm recorded an average capacity factor of 57.1 per cent - a new record for the UK.

Sebastian Bringsværd, head of floating wind development at Equinor said the floating turbines were able to access deeper waters and more dependable wind speeds, which improved the performance and productivity of the wind farm.

He said: “The potential for floating offshore wind is huge. With access to deeper waters and therefore higher and more consistent wind speeds, floating offshore is not only an efficient way to generate electricity from wind, this exciting technology can also provide jobs and value creation for the countries supportive of floating.

He added: “We believe Scotland has the potential to build a globally competitive offshore wind industry, including a real chance to enhance the development of floating offshore wind.”

The results come as the UK government announces funding for expansion of ports and production facilities for boosting wind power, and floating wind turbines are a key area of interest for the government.

Equinor also explained how scaling up production of wind turbines was pushing down costs. The company is currently building what will become the world’s largest floating wind farm off the Norwegian coast when it becomes operational in 2022, and said it has seen a fall in cost of 40 per cent since it built Hywind Scotland.

Mr Bringsværd said: “The global energy industry has been pleasantly surprised by the rapid decline in the cost to deploy fixed-bottom offshore wind. We’ve been working on floating offshore wind for more than ten years and we see that significant cost reductions can be achieved through scale and experience, paving the way for floating to become fully commercialised.”

The company hopes to create 17,000 “long term skilled” jobs in the UK in places unsuitable for fixed-bottom wind farms, by 2050.

Sonja Chirico Indrebø, Hywind Scotland plant manager, said: “In Equinor we are constantly striving to improve the performance of our assets, whilst ensuring we extract learnings to support future projects.

“The turbines on Hywind Scotland are covered in sensors, to extract as much data from the wind farm as possible. We’re monitoring everything from ballast, mooring, structural strains and the more regular wind turbine sensor data, looking at how best to optimise this innovative technology as we prepare to develop at scale.

“We’re sharing parts of this data across industry to help the advancement of the technology globally and more widely than just our own operations.”

The wind turbines standing up to the world’s worst storms.