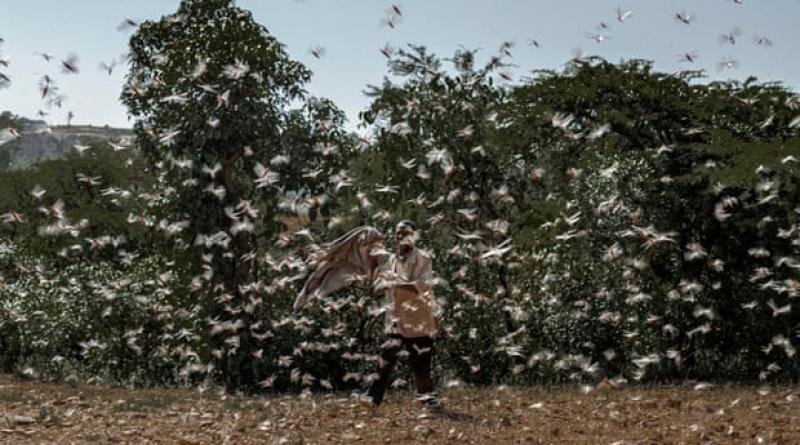 As surveillance and spraying operations cease due to conflict, there are fears the existing food crisis could worsen.

They marched over grassy plateaux and down craggy hillsides, beating the earth with sticks and blasting gunshots into the darkening skies.

“Never before have we seen something like this,” says Mulualem Berhe, a 54 year-old farmer shaking a plastic bottle filled with pebbles, thick plumes of smoke enveloping the trees behind him. A few feet away a pickup truck rolls into view, teenagers crowded into the back, blowing whistles and yelling – eyes fixed on the horizon.

Almost every inhabitant of Debrekal, a district of scattered homesteads near the northern Ethiopian town of Adwa, is enlisted in the battle against billions of desert locusts that descended in October and have ravaged countless fields. The villagers’ methods are simple and time-honoured: smoke, guns, and noise.

After an unusually long and wet rainy reason, which made perfect breeding conditions, what the UN called the “worst locust swarm in 25 years” has returned with a vengeance to the Horn of Africa.

Mulualem, who has a small field of teff and two oxen to till it, is one of the unlucky ones: his entire harvest was ruined. “As our grandfathers told us: if you make sound the locusts will leave,” he says. “But now there are so many, nothing gets rid of them.”

Last year, the plague destroyed 350,000 tonnes of cereals and more than 1.2m hectares (3m acres) of pasture in Ethiopia. This year is expected to be even worse. Since January locusts have laid waste to more than 200,000 hectares (almost half a million acres) of farmland. Boosted by the rains, the locusts’ numbers multiplied 8,000-fold, according to the UN’s Food and Agriculture Organization (FAO).

Now the fight to control them has been dealt another blow: the outbreak of war in northern Ethiopia between the regional government of Tigray, where Awda is situated, and the federal government of Ethiopia’s prime minister, Abiy Ahmed.