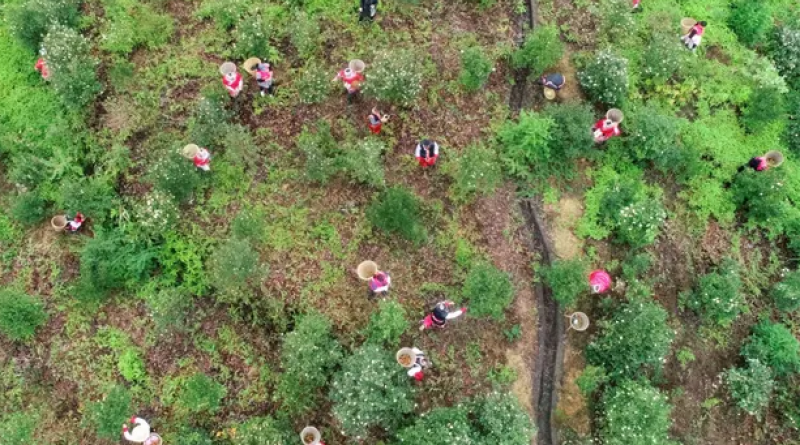 Global study calls for urgent action to prevent ecosystem collapse, with farming the biggest cause of die-off

Between a third and half of the world’s wild tree species are threatened with extinction, posing a risk of wider ecosystem collapse, the most comprehensive global stocktake to date warns.

Forest clearance for farming is by far the biggest cause of the die-off, according to the State of the World’s Trees report, which was released on Wednesday along with a call for urgent action to reverse the decline.

The five-year, international study found 17,510 species of trees are threatened, which is twice the number of threatened mammals, birds, amphibians and reptiles combined.

This was 29.9% of the 58,497 known species of trees in the world. But the proportion at risk is likely to be higher as a further 7.1% were deemed “possibly threatened” and 21.6% were insufficiently evaluated. Only 41.5% were confirmed as safe. 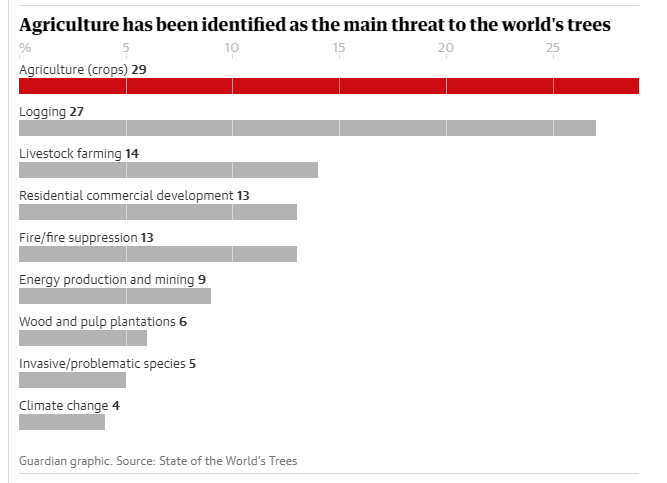 The problem was evident across the globe. Madagascar had the most (1,842) threatened tree species, with Brazil in second place with 1,788, among them big-leaf mahogany, rosewood and eugenia. In China, the world’s sixth most biodiverse nation, magnolia, camellia and maple were among the 890 species at risk.

Tropical island states are disproportionately affected, particularly ebony and rosewood, but even in Europe – which is relatively poor in terms of natural diversity – there has been an alarming decline in numbers of whitebeams and rowan. In North America, pests and diseases are causing severe losses of ash populations.

Botanists describe trees as “the backbone of the natural ecosystem”. Although only 0.2% of species have become extinct so far, the authors say an accelerating decline could have dire knock-on effects. Humans are directly affected by the loss of carbon sequestration, oxygen production, timber for construction, fuel for fires, ingredients for medicine and food, buffers from storms, and the wellbeing that comes from shade and beauty. Arguably more important are the indirect impacts on natural life-support systems. In many parts of the world, trees are the pillars of a healthy ecosystem. Without them, other plants, insects, birds and mammals struggle to survive.

“Trees are essential … it’s like a Jenga tower. Pull the wrong one out and the ecosystem falls apart,” said the report’s lead author, Malin Rivers, the head of conservation prioritisation at Botanic Gardens Conservation International (BGCI). “When I look at these numbers, I feel we need to act now.”

The report identifies the main threats to trees. Farming (crops 29% and livestock 14%) takes top place, followed by logging (27%), housing and other commercial development (13%), fire (13%), mining (9%), pulp plantations (6%) and invasive species (3%). Climate change (4%) is bottom of the list, though this does not include the pressure it adds on fire and agriculture.

Gerard T Donnelly, the president of the Morton Arboretum in Illinois, US, hoped policymakers would use the groundbreaking study as a conservation tool: “This report makes clear that the world’s trees are in danger. It was developed through years of vigorous research and collaboration among the world’s leading tree conservation organisations and will guide further scientifically informed action to prevent tree extinctions.” 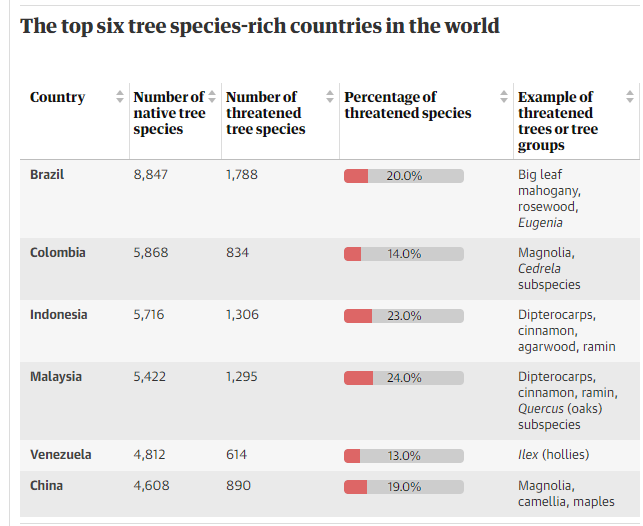 BGCI has recommended an expansion of protected area coverage for threatened species, planting campaigns that focus on the highest-risk populations, closer global collaboration, more funding for conservation efforts, and greater efforts to back up species in botanic gardens and seed banks.

The group has launched the GlobalTree Portal, an online database tracking conservation efforts at the species, country and global level.

“For the first time we know which species are threatened, where they are and how they are threatened so we can make better-informed conservation decisions,” Rivers said. “These species are not extinct yet. There is still hope. There are still ways to get them back from the brink.”