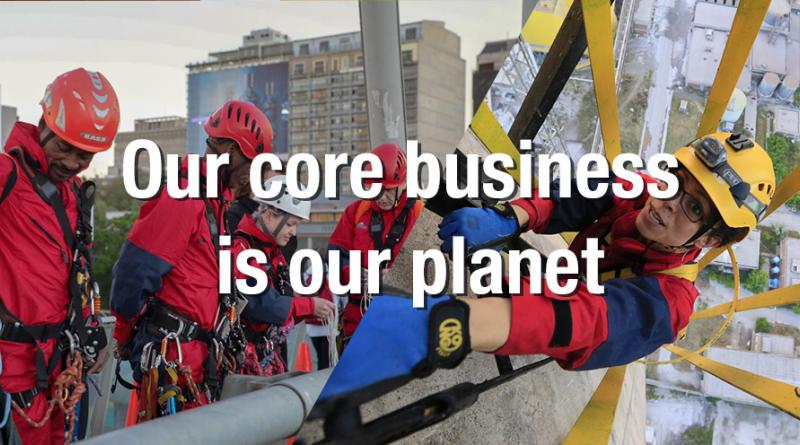 Greenpeace was founded by activism. Brave and empathetic activism, that’s about looking beyond oneself, seeing the bigger picture and wanting to create a better and safer world for everyone around you. Here at Greenpeace we’re so fortunate to have activists of all races, backgrounds and demographics who put their lives on the line for what they believe in.

That’s why I’d like to spend a few minutes to look back at some of our most risky, impactful and epic actions on the continent and around the world. I still find these actions to be inspiring and they renew my sense of purpose for our future. I hope these stories will renew your spirit too. 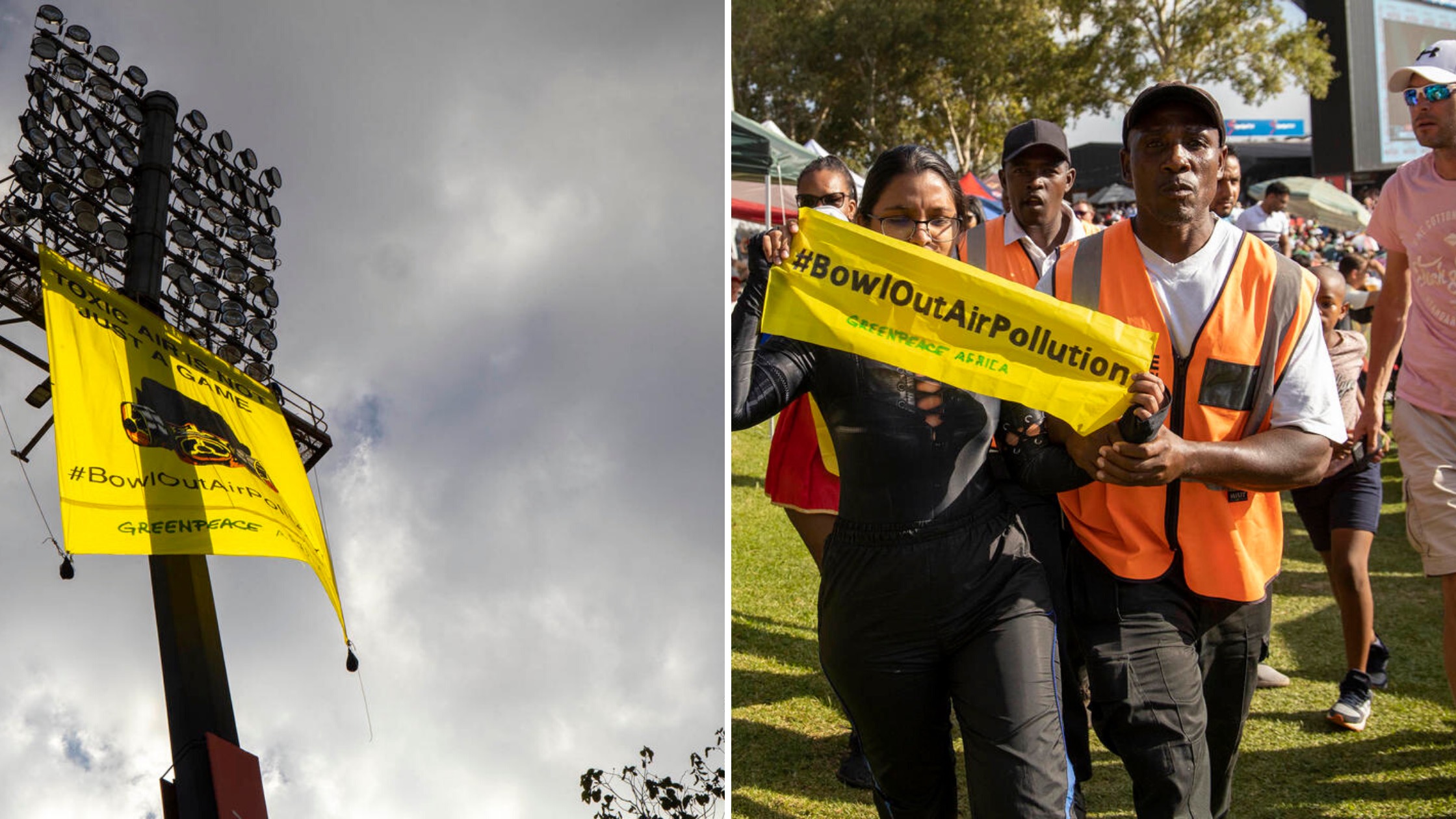 Earlier this year at least six Greenpeace Africa activists wearing superhero costumes leapt onto the SuperSport Park cricket field during the international T20 match between England and South Africa. Their mission was to hand the Proteas captain Quinton de Kock and his team an air pollution mask. While another team of activists dropped a banner from a floodlight in the stadium next to the scoreboard that read: “Toxic air is not just a game #BowlOutAirPollution,” highlighting the danger that air pollution poses, even to our sporting heroes. Some activists were arrested on no charge and released the following day. 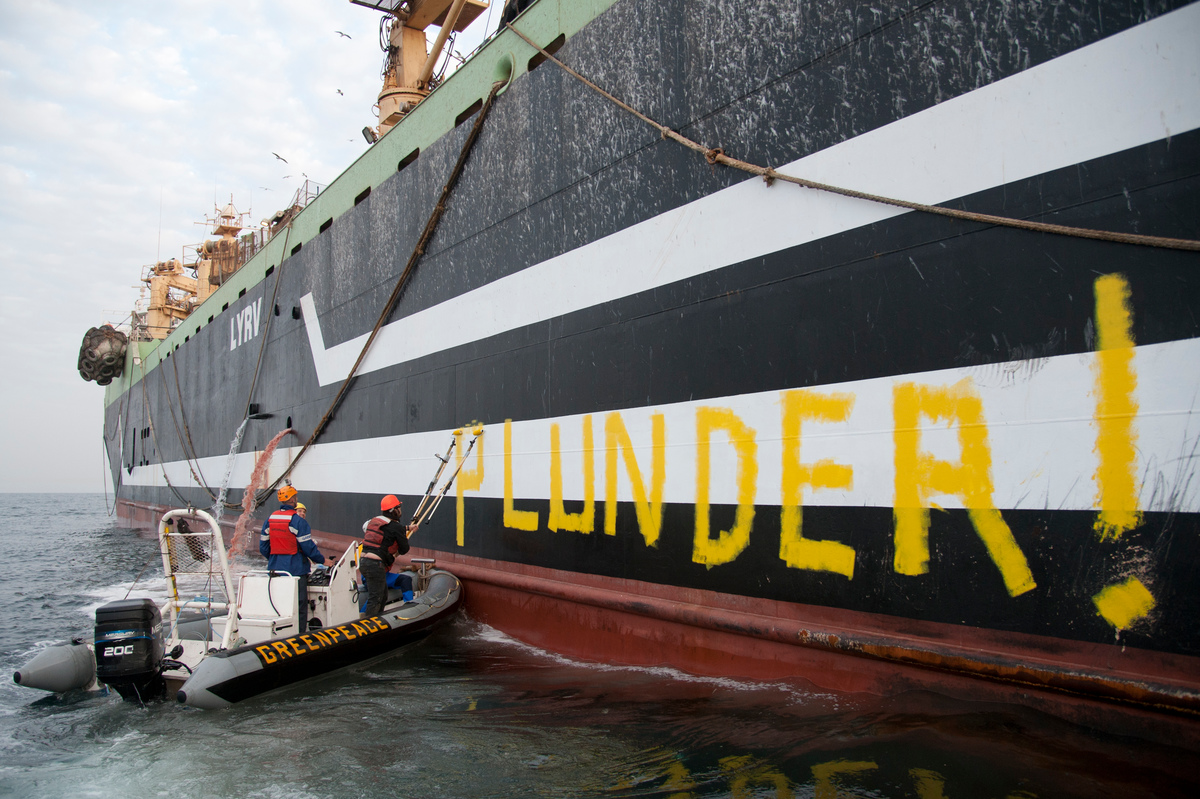 In 2012 Greenpeace activists painted 'Plunder' on the side of the Lithuanian super trawler, Abel Tasman, miles off the coast of Mauritania during a protest against overfishing. West African waters have been subject to overfishing for decades, which has had a more than negative impact on local communities like women fish processors and artisanal fishermen to this day. 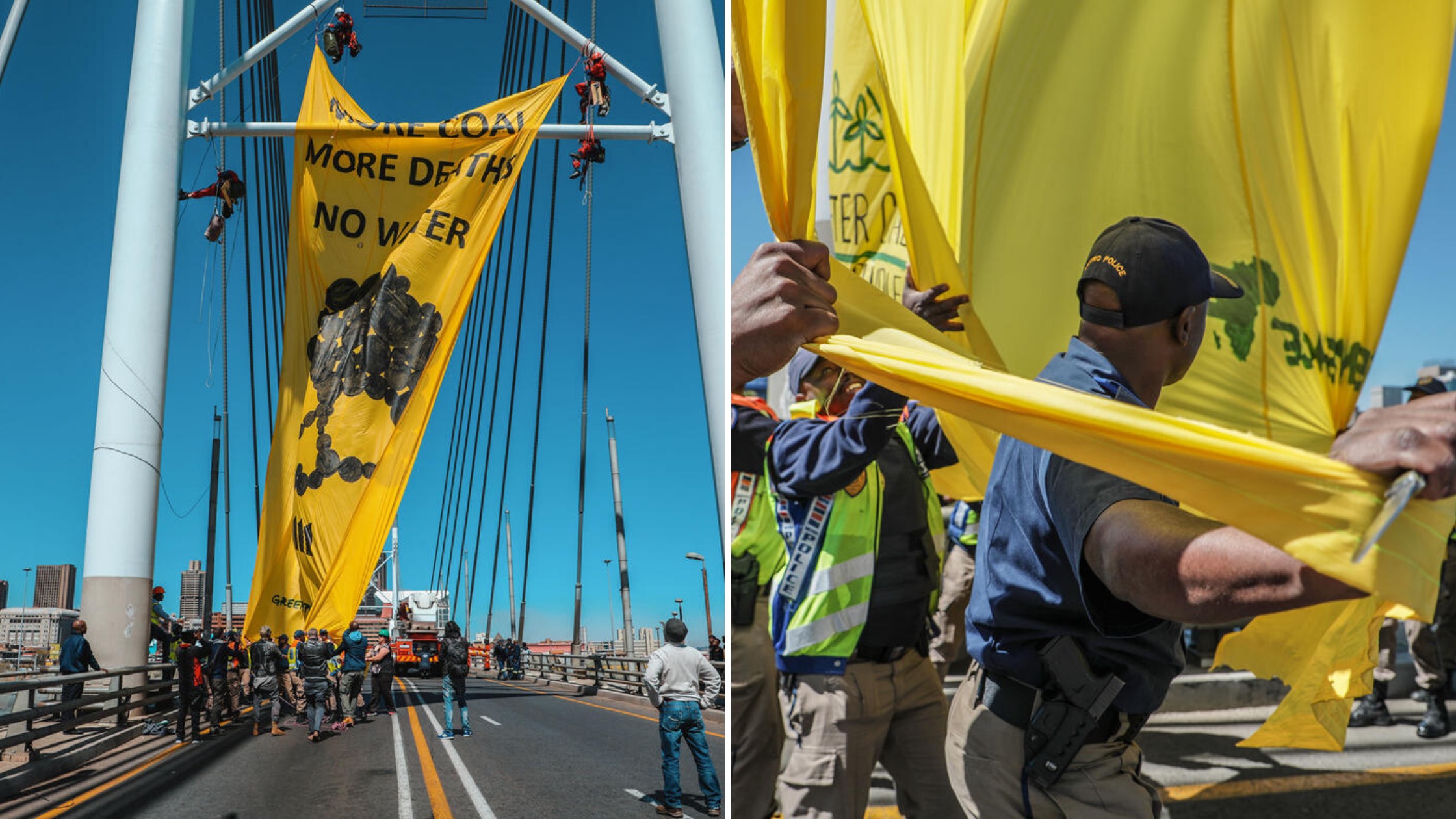 Greenpeace Africa activists in collaboration with the Life After Coal Campaign scale Mandela bridge in protest against the inclusion of new coal infrastructure in South Africa's draft electricity plan (IRP2018). Fortunately nobody got hurt, but this protest echoed in the media for days after the action. 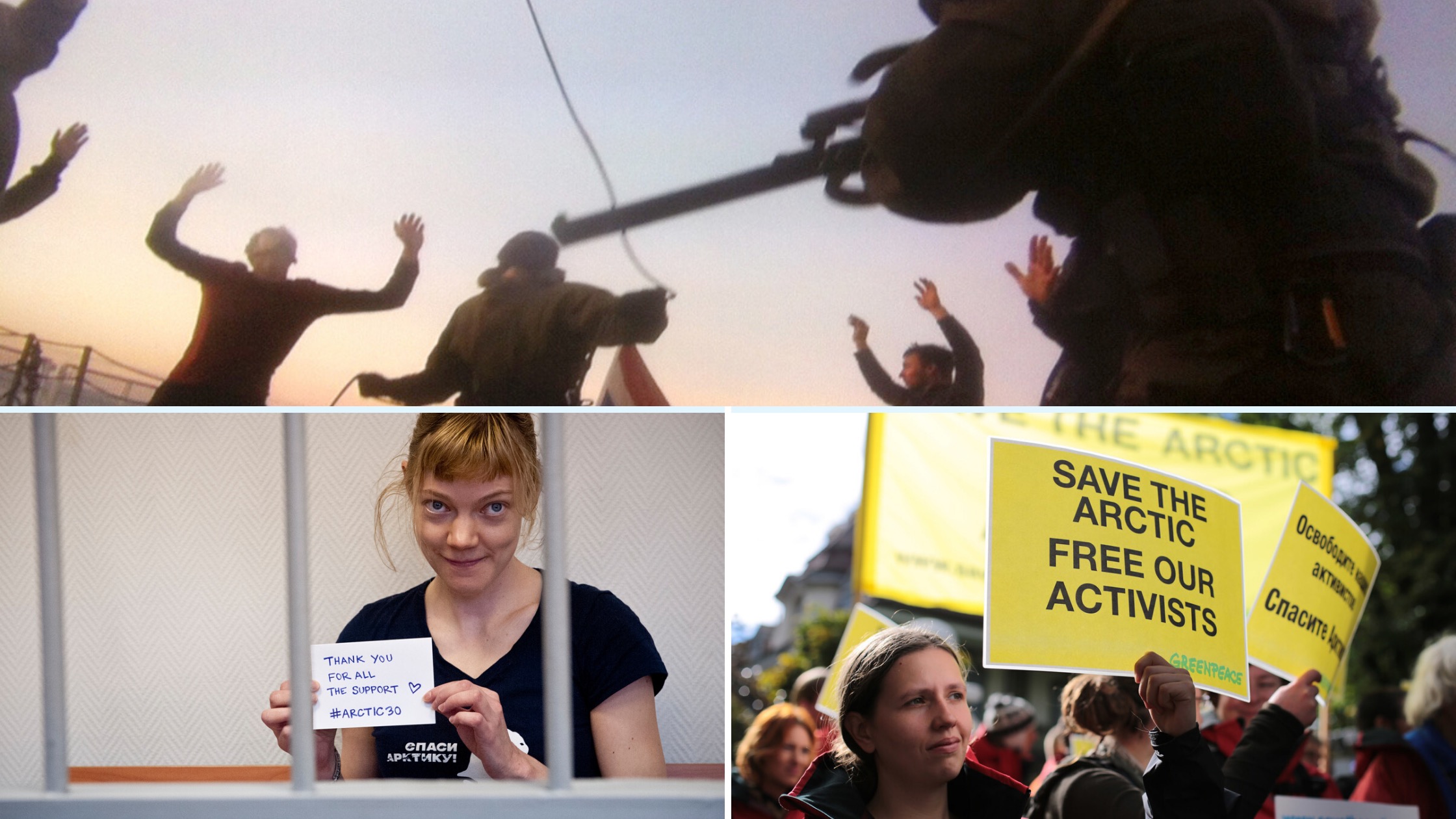 Who could ever forget the Arctic 30 (28 Greenpeace International activists, a freelance photographer and a freelance videographer)?. They made a courageous attempt to climb the 'Prirazlomnaya', an oil platform operated by Russian energy giant Gazprom in the Pechora Sea. The activists were there to peacefully protest against Arctic oil drilling. The first photograph was taken with a cellphone camera off a computer screen. The image shows Russian security services abseiling from a helicopter onto the deck of the Arctic Sunrise and seizing the ship at gunpoint. On the bottom left is Sini Saarela, one of the Arctic 30 at her bail hearing at Court in Murmansk, Russia. People all over the world joined the call to ‘Free the Arctic 30’. 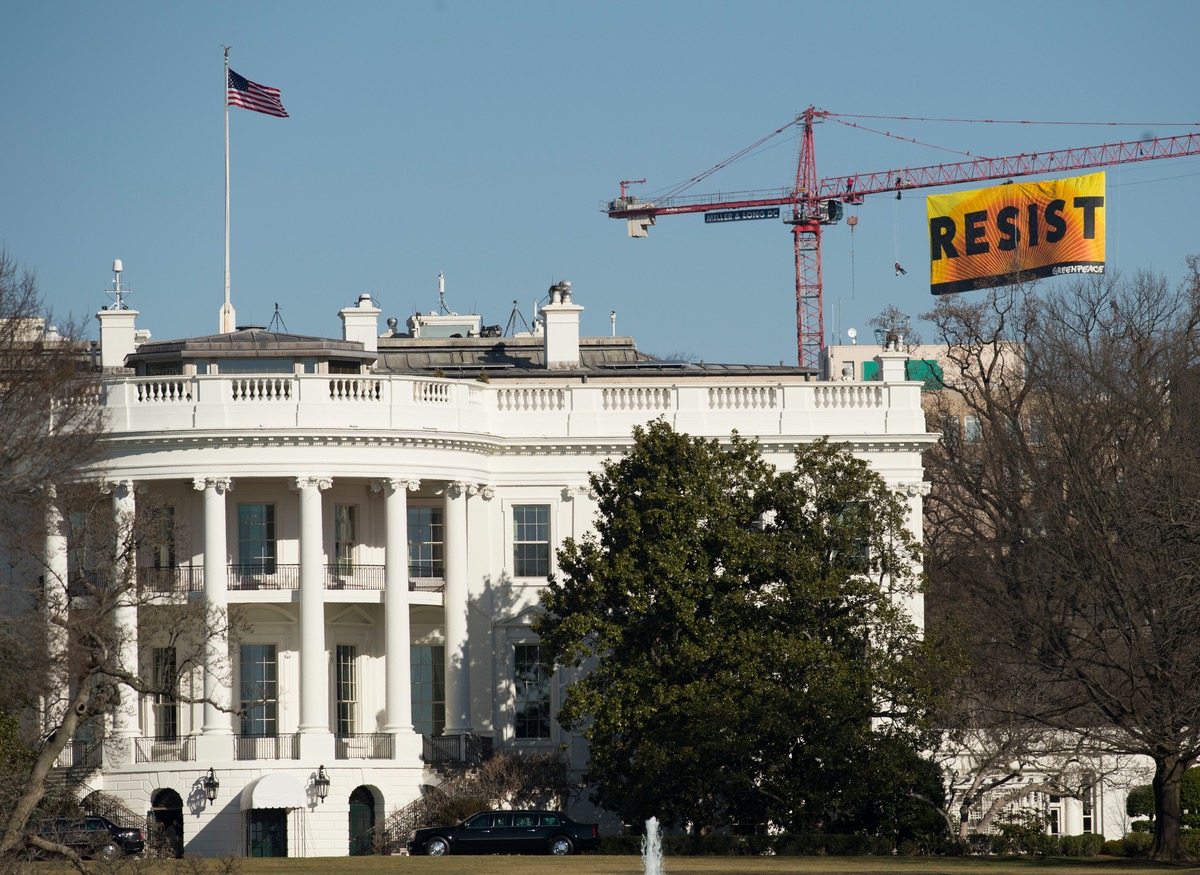 In 2017, Greenpeace activists deployed a banner on a construction crane near the White House reading "RESIST" on President Trump's fifth day in office. The activists were calling for those who want to resist Trump's attacks on environmental, social, economic and educational justice to contribute to a better America.

These are just some of the many powerful, non-violent protests that Greenpeace activists have held, to demonstrate the urgency of protecting our planet. Whether to end overfishing, stop new coal and nuclear projects, or holding governments and corporations legally accountable for environemtnal destruction - let’s keep this momentum going as much as it means innovating new ways to make sure our demands are