Greening measures will add around 8% to airline costs, EU estimates 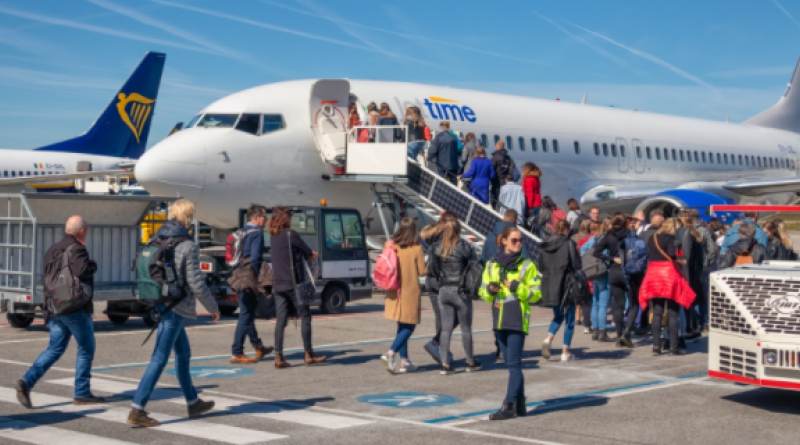 Environmental regulations aimed at cutting the carbon footprint of aviation will increase the cost of flying by around 8% by 2050, according to the European Commission.

The EU executive tabled a package of energy and climate laws in July this year, aiming to halve the EU’s carbon emissions by the end of the decade before reaching net-zero by 2050.

Several of those are focused on the aviation sector, such as plans to scrap the tax-free status of kerosene, and phasing out free CO2 permits for flights covered by the EU’s carbon market. Another flagship measure is a mandate that jets refuelling at EU airports uplift a set percentage of sustainable aviation fuels (SAFs).

SAFs, which are made from waste-based biofuels and electro-fuels, are significantly more expensive than kerosene. And that is likely to be reflected in the price of airline tickets.

“It’s clear that there is going to be a price impact” from EU proposals to green the aviation sector, said Filip Cornelis, aviation director at the European Commission’s transport department.

“We’ve calculated that the SAF mandate on its own will increase the fuel cost for airlines by about 3% by 2030, with an impact on ticket prices of about 1%,” said Cornelis who was speaking at a online event hosted by EURACTIV on Tuesday (28 September).

“And this is simply because sustainable fuels continue to be more expensive than kerosene, between two and five times more expensive,” he told participants at the event.

By the middle of the century, the Commission expects an 8% impact on the price of tickets from the SAF mandate, he added.

“Nevertheless, we see a great deal of support in the industry, which is very welcome. I think the European airlines are ready, and the passengers are ready, to shoulder that additional cost,” the official added.

Daniel Vilela Oliveira, a policy officer at the German environment ministry, also affirmed that the shift to renewable fuels such as electro-fuels would make flying more expensive but said the increase should be considered in the context of the climate emergency.

“The prices will increase in aviation, but in order to reach climate neutrality, these measures have to be taken,” he said.

Thomas Reynaert, the managing director of airlines association A4E, said it was difficult to say with certainty what effect the measures will have on ticket prices.

“SAFs are more expensive than kerosene. It will have a significant impact on airlines’ business overall, its operations. It might possibly also have an impact on the ticket prices and the connectivity if SAF prices don’t go down very quickly,” he said.

Reynaert called for measures to make SAFs more affordable, including grants, loans, and pricing support mechanisms. “Instead of just increasing the price of CO2 and kerosene, we should also look at reducing the SAF prices,” he suggested.

At present SAFs make up less than 1% of the jet fuel used in the EU, with the low supply contributing to its high price. However, several factors determine the cost of a flight beyond fuel price, Reynaert said.

“Will flying become more expensive [because] of increased SAF use? That needs to be determined. The pricing of a ticket is very complex, so it’s too soon to say,” he added.

Chelsea Baldino, a researcher with the International Council on Clean Transportation, said she expects the impact on prices to be muted up to 2035 due to the small quantities of SAF required under the mandate, but that the measure “will likely raise prices” in the long term.

“This just shows how for a long time the aviation sector has been insulated from feeling the effects of any policies. They’ve received exceptions from the emissions trading scheme and there is no tax on kerosene, so it’s good that we’re starting to incorporate carbon pricing into the sector,” she said.

Under the ReFuelEU Aviation proposal, all aircraft that depart from an airport inside the bloc will be required to refuel using a kerosene and SAF blend. The SAF blending requirement will increase over time, rising from 2% in 2025 to 5% in 2030, reaching 63% In 2050.

Prior to the pandemic-driven downturn in flying, emissions from aviation accounted for 3.8% of total CO2 emissions in the EU, making it the largest source of transport greenhouse gas emissions next to road transport.

‘They said we were eccentrics’: the UK team developing clean aviation fuel

‘Decarbonising aviation’: the Electric EEL could be the future of flying