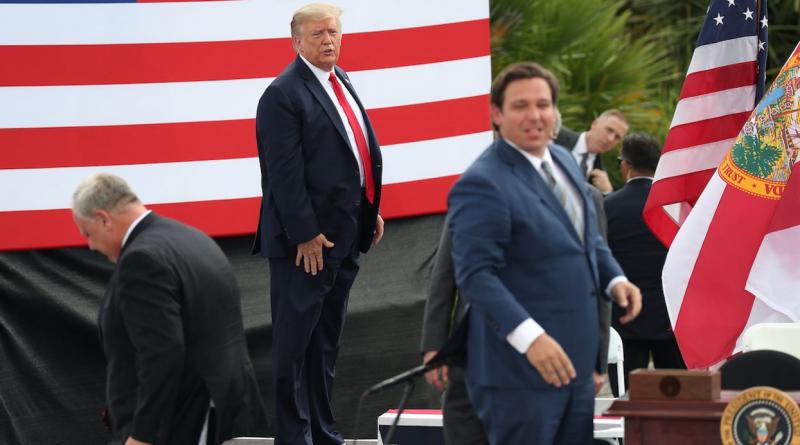 President Trump told a crowd in Jupiter, Florida Tuesday that he is an environmental president, claiming that "it's true: number one since Teddy Roosevelt. Who would have thought Trump is the great environmentalist?" according to the White House transcript of the speech. He added, "And I am. I am. I believe strongly in it."

The dubious claim was made as he vowed to sign a 10-year moratorium on offshore oil and gas drilling off the Florida, Georgia, and South Carolina coast. Essentially, he is signing a moratorium that is already in place that his own administration proposed lifting, according to The New York Times.

The New York Times also noted how dubious the claim Trump made is when he called himself a great environmentalist after he has abandoned the Paris agreement, rolled back clean air and clean water initiatives, lowered emissions standards on vehicles, allowed toxic pollution to spew into the atmosphere, and warmly embraced a toxic pesticide known to cause brain damage in children.

When he signed the measure Tuesday at the campaign stop near the Jupiter Inlet Lighthouse, he said, "This protects your beautiful gulf and your beautiful ocean, and it will for a long time to come," as ABC News reported. And yet, at no time during the speech did he note that he tried to expand offshore drilling coast-to-coast, but only dialed it back after then Florida Governor Rick Scott asked the President not to lift the moratorium for his state.

In the speech, Trump tried to cast himself as a great protector of the environment in a state that is crucial to his reelection. While he and Joe Biden are in a statistical dead heat in Florida, the climate crisis is an issue that weighs on the minds of both Republicans and Democrats in the state. Florida, which is mostly at sea level, is often battered by hurricanes, susceptible to heat waves, and vulnerable to rising oceans, according to The New York Times.

Trying to claim the mantle of environmentalism, Trump said, "My administration is proving every day that we can improve our environment while creating millions of high-paying jobs. This is a really sharp contrast to the extreme, radical left that you've had to deal with." Without citing any evidence, he added, "Joe Biden's plan would destroy America's middle class while giving a free pass to the world's worst foreign polluters like China, Russia, India, and many others. They don't have to clean up their lands, but we have to clean up ours. The left's agenda isn't about protecting the environment, it's about punishing America."

Trump also failed to mention his recent consideration of opening up the Gulf of Mexico to expanded drilling, as POLITICO reported. Nor did he mention that signing a moratorium for oil and gas exploration off the Atlantic Coast is purely theater since any declaration would have to go through Congress, which is extremely unlikely to take up the issue prior to Election Day, according to theLos Angeles Times.

Trump's bizarre claims of environmentalism after a track record of reducing protections stunned environmentalists who often see Trump as the president with one of the worst environmental legacies in history.

"He's ignoring science, he's ignoring experts and now he's even ignoring his own record," said Pete Maysmith, a senior vice president for the League of Conservation Voters, a nonprofit group, to the Los Angeles Times. "Florida is ground zero for climate change with extreme weather and hurricanes in particular. Donald Trump has attempted to roll back over 100 environmental protections, including dozens related to climate change and clean water. He's an environmental disaster and Florida's paying the price."

The Sierra Club zeroed in what Trump has done to the environment in Florida.

"Failing to adequately fund Everglades restoration, attempting to sell off our waters to corporate polluters and rolling back more than 100 environmental protections doesn't make you anything other than the worst president ever for the environment and climate," said Ariel Hayes, the political director of the Sierra Club, as The New York Times reported. "Voters in Florida and across the country have watched Trump achieve this status for nearly four years, and no amount of greenhouse gaslighting will change that."