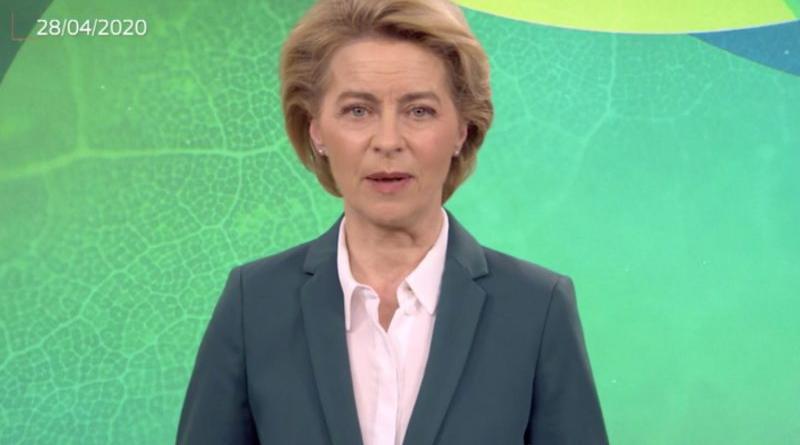 “As we now plan to slowly go back to work and to invest billions of euros to restart our economy, we should avoid falling back in old, polluting habits,” von der Leyen said in a video statement.

“Instead, we should bounce back better from this pandemic,” she added, saying the European Green Deal will be “our motor for the recovery”.

“By using the European Green Deal as our compass, we can turn the crisis of this pandemic into an opportunity to rebuild our economies differently and make them more resilient,” the Commission president said.

“We can make our society and our planet healthier by investing in renewable energy, by driving clean cars, by renovating our houses and making them energy efficient. By buying sustainable food, reusing materials rather than throwing them away or producing low carbon steel.

“That is the essence of the European Green Deal.”

“With the European Green Deal the EU Commission has shown the way forward,” Merkel said in a speech by video link. “That’s why I welcome the interim goal of EU greenhouse gas emissions reductions of 50-55% by 2030 compared to 1990.”

But Merkel also warned about strenuous talks ahead on the EU recovery plan.

“Let me be clear: There will be a difficult debate about the allocation of funds. But it is important that recovery programmes always keep an eye on the climate, we must not sideline climate but invest in climate technologies,” Merkel said.

Last week, EU leaders asked the Commission to draw up proposals for a trillion-euro “recovery fund” to restart the European economy after the pandemic.

Although the exact amount and funding details are still unclear, von der Leyen said the new fund will be “clearly linked” to the EU budget and managed by the Commission.

Fresh money will come from a mixture of grants and loans backed by the EU budget, which will be temporarily increased to “around 2%” of the EU’s gross national income, up from 1.2% currently, the Commission president said.

Meanwhile, EU member states are falling behind when it comes to their National Energy and Climate Plans (NECPs), which were due to be submitted by the end of last year.

Four EU countries – including Germany – still have to hand in their plans to the European Commission, said Tomislav Ćorić, the Croatian minister who chaired a video meeting of EU energy ministers on Tuesday.

“Regarding the Green Deal initiative, the majority of ministers backed Commission plans to continue hard work, in particular on smart sector integration, the offshore wind strategy and the renovation wave,” Ćorić told a press conference after the meeting.

The three EU initiatives will all be released by the end of September as planned, Ćorić said, underling the importance of building renovation as part of the European recovery plan.

But the disruption caused by the coronavirus crisis means conclusions on the NECPs are unlikely to be adopted at the next meeting of the Energy Council in June, he said. “It will not be possible. That is obvious right now.”