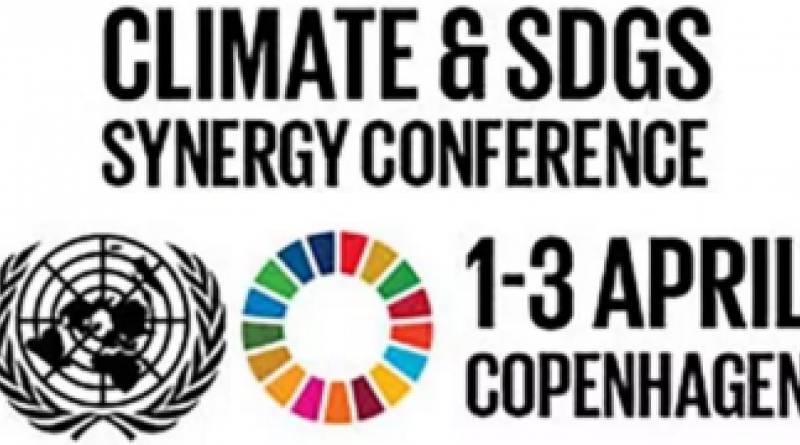 Experts, leaders gather in Copenhagen to promote ambitious action while ensuring no one is left behind.

What: Facing the increasing urgency to limit global temperature rise to 1.5° Celsius, global experts and leaders on climate change and sustainable development will come together at UN City in Copenhagen to consider how to accelerate climate action in a fair way that benefits all people. Participants at the Global Conference on Strengthening Synergies between the Paris Agreement and the 2030 Agenda for Sustainable Development (informally the Climate and SDGs Synergy Conference), will strengthen the link between the climate agenda and the 17 Sustainable Development Goals, identifying key areas to mobilize action, resources and investment to better serve the implementation of both frameworks.

The meeting is being organized by the United Nations Department of Economic and Social Affairs (UN DESA), the United Nations Framework Convention on Climate Change (UNFCCC) and the Danish Ministry of Foreign Affairs and Ministry of Energy, Utilities and Climate. A press conference will be held on the second day with officials from the three entities.

Who: With more than 400 participants registered, the meeting will be attended by government representatives from developed and developing countries, youth, and members of the private sector, academia, civil society and the UN system.

Background: Climate change is the defining issue of our time, and while the world needs to move fast, the solutions must be fair. The world’s most vulnerable people are suffering the worst effects of climate change, such as more intense storms, dangerous heat waves, more frequent and longer-lasting droughts, rising seas, while contributing least to the problem. The interconnected Sustainable Development Goals, which include the standalone SDG 13 on Climate Action, provide the best framework for tackling the climate emergency in ways that help everyone, in particular, women, children, youth, older persons, persons with disabilities and those living in small island developing states.

In Copenhagen, experts from all stakeholder groups are expected to analyse ways to align climate action with SDG implementation to maximise benefits to both and scale up efforts towards climate adaptation and mitigation at the global, regional and country levels. They will make a set of concrete recommendations for advancing implementation action and stimulating partnerships and investments all with the goal of strengthening the global response of climate change, sustainable development and efforts to eradicate poverty.

The Climate and SDGs Synergy Conference is a critical part of the UN’s comprehensive review of climate action in 2019. The conference will serve also as a preparatory Expert Group Meeting for SDG 13, which is one of the goals to be examined in-depth at this year’s High-level Political Forum on Sustainable Development (HLPF), happening at UN Headquarters in New York in July. This thematic review in Copenhagen of SDG 13 implementation will provide valuable context for the HLPF’s deliberations. The HLPF outcome itself will inform the debate at two other major UN events, the Secretary-General’s Climate Action Summit and the SDG Summit, to be held on consecutive days during the General Assembly high-level week in September.

The entire three-day conference, including the press conference, will be livestreamed online here: https://streaming.uncity.dk/uncity

To participate in the press conference in-person and access the Press Conference Room at UN City, journalists need a valid Press Card. Please contact Head of Public Diplomacy and Communication Mr. Lars Peter Schaumburg-Levy no later than Monday, 1 April, at 12:00 p.m., at larspeter.schaumburg-levy@one.un.org.

We are also inviting journalists outside Copenhagen to participate in the press conference by submitting questions in advance. Please email your question to UN DESA Associate Public Information Officer Ms. Ariel Alexovich no later than Monday, 1 April, at 12:00 p.m., at alexovich@un.org. Some questions may be addressed during the press conference, which may be viewed live on webcast here: https://streaming.uncity.dk/uncity

The Conference programme and further details can be found here: https://sustainabledevelopment.un.org/climate-sdgs-synergies2019

Background about the Paris Agreement:
https://unfccc.int/process-and-meetings/the-paris-agreement/