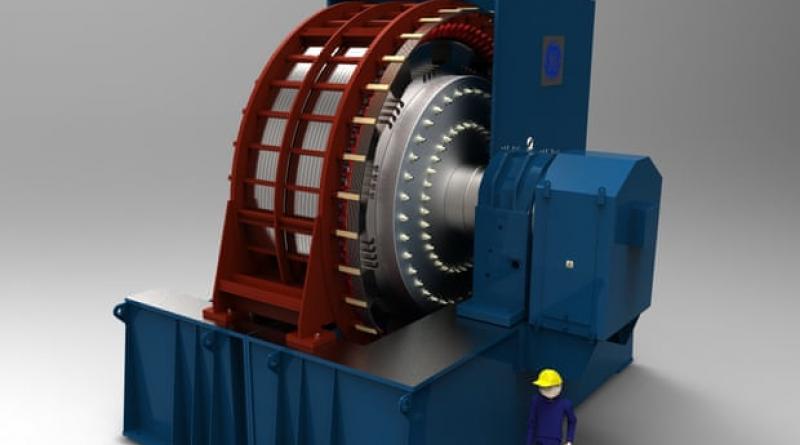 A giant flywheel in north-east Scotland could soon help to prevent blackouts across Britain by mimicking the effect of a power station but without using fossil fuels.

The trailblazing project near Keith in Moray, thought to cost about £25m, will not generate electricity or produce carbon emissions – but it could help keep the lights on by stabilising the energy grid’s electrical frequency.

The Norwegian energy company Statkraft hopes that from next winter the new flywheel, designed by a division of General Electric, will be able to mimic the spinning turbines of a traditional power station, which have helped to balance the grid’s frequency at about 50 hertz for decades.

Currently, the National Grid Electricity System Operator (ESO) is forced to shut down windfarms and run gas power stations even when there is more than enough renewable energy to meet Britain’s electricity demand, in order to keep the grid’s frequency steady.

By simulating the spinning metal mass of a power station turbine without producing emissions, Statkraft should be able to help ESO rely less on fossil fuels and use renewable energy more.

This is the first time a project of this kind will be used anywhere in the world and ESO believes it could be a “huge step forward” in running a zero-carbon electricity grid.

The task of keeping the electrical frequency of the grid steady is becoming more challenging because Britain’s growing stable of renewable energy projects do not use the same giant spinning turbines that typically help to keep frequency stable.

In August last year more than a million people across the UK were plunged into darkness during one of the worst power blackouts in more than a decade after the frequency of the grid fell to 48.88Hz.

Since then, National Grid ESO has accelerated plans for new blackout safeguards to avoid another energy system shock, including schemes and new technologies that can help protect the grid’s frequency without increasing its carbon footprint.

“Our contracts for stability services with providers such as Statkraft are cheaper and greener, reducing emissions and saving money for electricity consumers,” said Julian Leslie, the head of networks at National Grid ESO. “This approach is the first of its kind anywhere in the world and is a huge step forward in our ambition to be able to operate the GB electricity system carbon-free by 2025.”

Households to be paid for daytime green electricity use during lockdown.