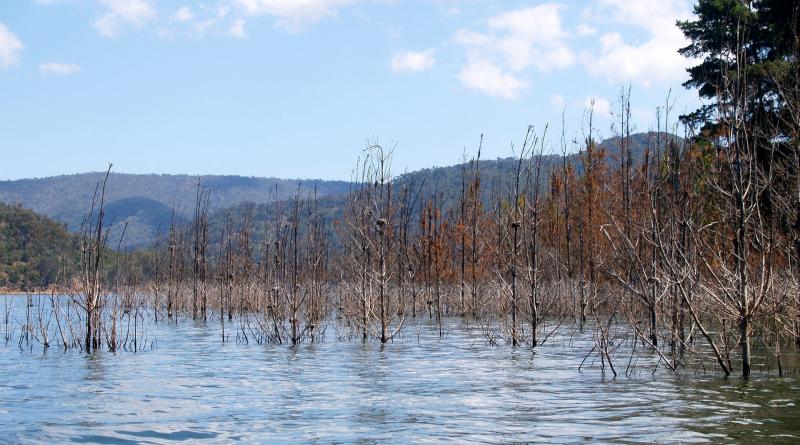 A striking window into the future

All along the mid-Atlantic coast, rising sea levels are creating a scene straight out of a horror movie. Climate change is increasingly threatening our trees, with invading seawater quickly outstripping the fresh water that forests rely on to survive. What’s left behind is a vacant woodland haunted by dead, decaying timber and bleached and blackened skeleton trees.

These are known as ghost forests.

What are ghost forests?

A ghost forest can be succinctly defined as the watery remains of what was once a thriving forest. Typical features include protruding dead trees, flooded areas and a general lack of greenery.

Much like a melting glacier, ghost forests are a real and visual representation of the effects of climate change. Whereas dwindling glaciers represent the melting of our ice caps, ghosts forests represent the places where verdant forests used to flourish. Unlike the glaciers, however, some communities have a front seat view to rising sea levels.

Much like a melting glacier, ghost forests are a real and visual representation of the effects of climate change.

The problem is urgent; today, ghost forests are forming at a faster rate than ever before. Forest retreat rates are approximately three times larger than prior to the Industrial Revolution. This is a significant marker as it is often thought of as the period when human-caused climate change really took off, leading to our current climate crisis.

How are they formed?

There are four contributors to the creation of ghost forests.

Sea level rises often cause coastal regions to become flooded. As this happens, seawater takes over the freshwater trees need to live. The seawater poisons living trees, thus creating the ghostly remains of a forest.

Sometimes, as tectonic plates attempt to slide past one another they become stuck and locked in place for centuries while tension builds. This tension then forms into a vertical uplift of mountains on the coast, a phenomenon termed an ‘orogenic uplift’. Hundreds of years later, the tension is released. As this happens, the coastline drops down to below sea level making it susceptible to tides. Areas of the coastline can be inundated with sea water, creating ghost forests.

Firstly, climate change worsens the problem of rising sea levels. Currently, data shows water is rising by up to 5mm every year in some locations. For reference, the global average is 3.1mm.

Likewise, climate change increases the frequency of natural disasters and aggressive, powerful storms. These contribute to the issue by pushing seawater inland, thus killing the trees.

Lastly, global warming is resulting in increasing activity from damaging species. Most prominently, scientists have seen spikes in mountain pine beetles, or Dendroctonus ponderosae Hopkins. These problematic critters spend most of their lives as larvae feeding on and attacking the inner bark of pine trees. Eventually, the trees die. As such, climate change and subsequently mountain pine beetle increases can mean the demise for Whitebark and other pines.

It is worth noting that when forests die out, marsh takes over. This is not necessarily a bad thing. After all, marshland is associated with many environmental benefits including acting as a carbon sink by sequestering and storing more carbon than the trees they replace. Unfortunately, marshland, like forests, can also be submerged. This is problematic as it results in a net loss of land and more carbon in the atmosphere.

Nevertheless, the most pressing problem isn’t the transition from forest into marsh — it’s how ghost forests and rising sea levels affect coastal communities.

How do ghost forests affect communities?

You might think a 5 mm sea rise per year doesn’t sound like much. However, experts suggest it corresponds to a 4.57m (15ft) saltwater push inland. This can have devastating consequences for coastland communities which rely on dry land to survive.

Driving through affected areas one might see bleached lawns where grass is impossible to grow, abandoned houses where families once lived and a long row of empty buildings covered in wetland grass.

Usually, we talk about rising sea levels with respect to low-lying countries or islands far, far away. However, to see the drastic consequences of some of the fastest sea level rises one just has to turn to the skeletal trees left standing at Dorchester County on the Maryland coast, southern New Jersey or Virginia’s Chesapeake Bay.

For land owners in these communities, displacement is expensive. Even for renters, rising sea levels and the front-seat views to ghost forests threaten their way of life. Driving through affected areas one might see bleached lawns where grass is impossible to grow, abandoned houses where families once lived and a long row of empty buildings covered in wetland grass.

For those who stay, whether through personal choice, family ties or economic entanglement, life isn’t easy. First there’s the mental stress brought on by the thought that your life could be destroyed at any moment. Then there’s the pressure of the loss of farmland. Maryland, for example, lost 2% of farmland in just eight years between 2009 and 2017. Data suggests this trend will only continue, which spells trouble for farmers in the area.

Looking to the future

Many experts predict ghost forests are just a window into the future. If we don’t make efforts to stop climate change, our world could begin to look a lot more like the communities at Chesapeake Bay, Dorchester County and southern New Jersey — and this could happen sooner than we think.

Research into ghost forests is a relatively new subfield, even though they were first discovered in 1910. In the past, ghost forests were somewhat of a rare occurrence. As they become more prominent, scientific interest has increased.

Now, scientists are seeking to de-mystify the phenomenon. Some of the questions they’re trying to answer include how much area ghost forests cover, how quickly the transition takes place, and how we can conserve our forests and marshes. The hope is that as we learn more, policymakers can implement more effective environmental protections.

In the end, ghost forests are a foreboding glimpse into what our future can become, and how humans are affecting the natural landscape. They are another poignant reminder that we must act — and act quickly — to save our Earth. After all this, I am reminded of the words of Franklin D. Roosevelt:

“A nation that destroys its soils destroys itself. Forests are the lungs of our land, purifying the air and giving fresh strength to our people. ”

'Ghost Forests' Are an Eerie Sign of Sea-Level Rise.