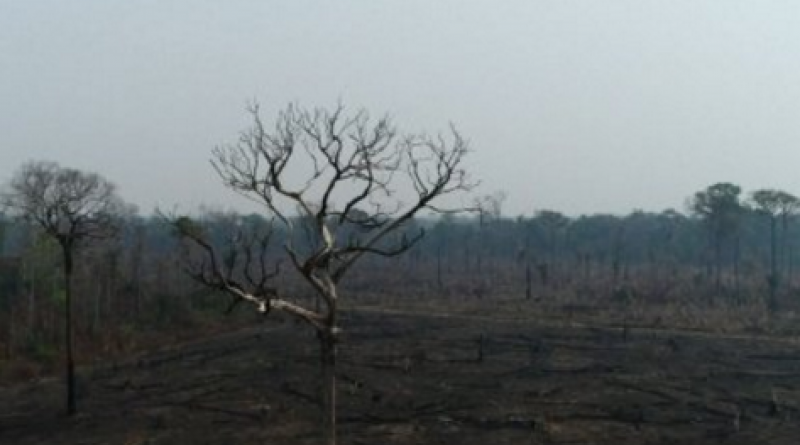 Social media has exploded after French President Emmanuel Macron announced the G7 will commit $29 million to help fight fires in the Amazon and protect the vast rainforest.

The G7 has pledged to give $US20 million ($29 million) to send firefighting planes to tackle the blazes engulfing parts of the Amazon - but environmental groups and social media users say it's not enough.

The announcement came from the presidents of France and Chile on Monday and Twitter users were quick to respond 'they should do better' and that the G7 is 'a very shameful group'.

“The offer of $20m is chump change, especially as the crisis in the Amazon is directly linked to overconsumption of meat and dairy in the UK and other G7 countries,” Mr George told The Guardian.

“The UK has plenty of leverage to stop the destruction of the Amazon by suspending trade talks with Brazil until its full protection is guaranteed.

“Any post-Brexit trade deals must prioritise the environment and human rights.”

His sentiments were supported on social media, where plenty of users suggested the G7 should 'stump out some real cash'. 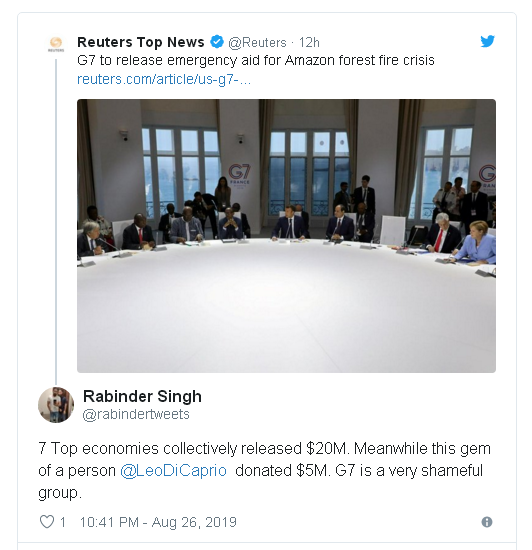 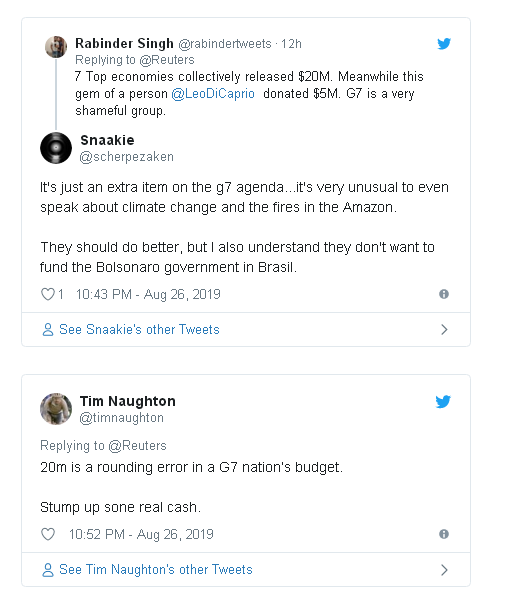 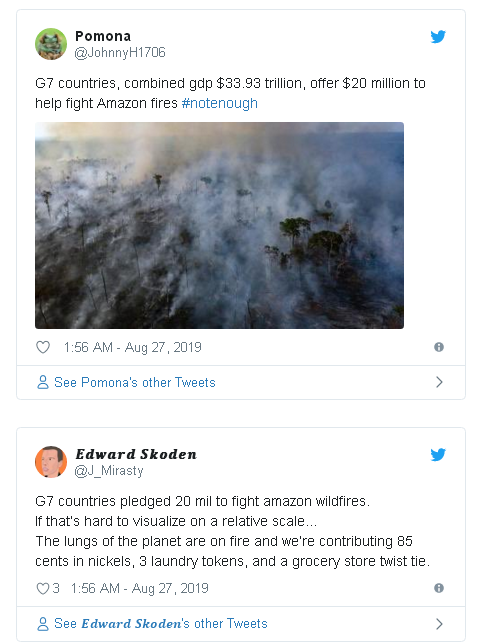 But the fury online didn't stop there, with many comparing the spending to the amounts pledged in Paris recently after the Notre Dame fires - and saying it's simply 'shameful'.

Others said that if Leonardo Dicaprio alone was donating $5 million, the G7 needed to contribute more. 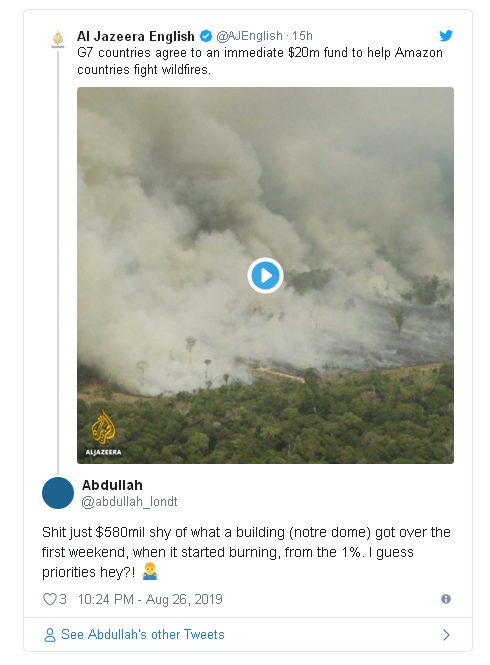 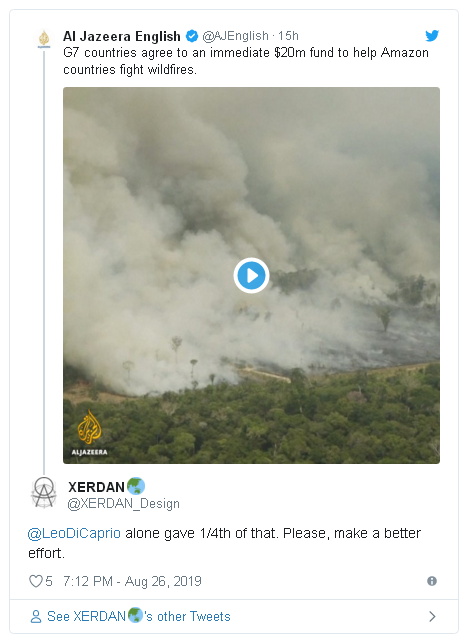 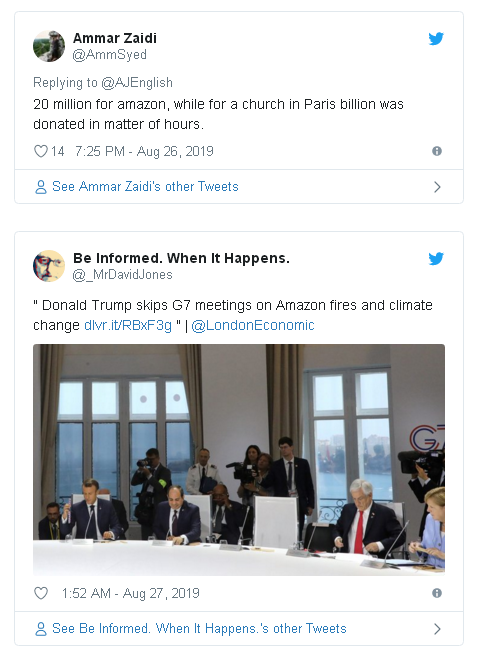 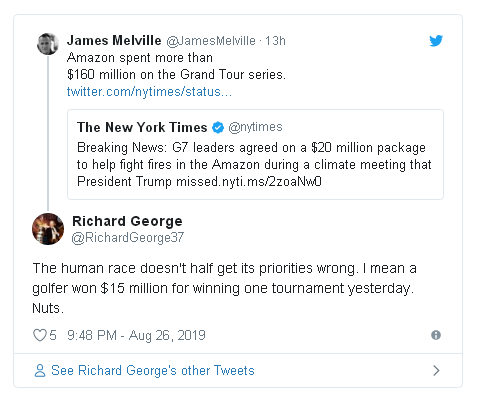 The G7 pledge comes after the wide-spread news coverage that nearly 80,000 forest fires have been detected in Brazil since the beginning of the year - just over half of them in the massive Amazon basin.

"We must respond to the call of the forest which is burning today in the Amazon," France's Emmanuel Macron said as President Sebastian Pinera of Chile, a guest of the G7, underlined that "countries of the Amazon are in dire need of fire brigades and water bomber planes."

Mr Macron has declared the situation an "international crisis" and said he had made it a priority of the summit of the G7, which comprises Britain, Canada, France, Germany, Italy, Japan and the United States.

G7 leaders gathered in Biarritz held talks on the many environmental challenges facing planet Earth, with a focus on the record number of fires destroying swathes of the Amazon.

Mr Macron has threatened to block a huge new trade deal between the EU and Latin America unless Brazilian President Jair Bolsonaro, a climate change sceptic, takes serious steps to protect the fast-shrinking forest from logging and mining.

Mr Bolsonaro lashed out at the French leader over his criticism and suggested NGOs could be setting the fires to embarrass him - without giving any evidence to back the claim.

But at the weekend, he finally caved in to international pressure to save a region crucial for maintaining a stable global climate, deploying two aircraft to douse fires and authorising the army to help tackle the blazes.

Canadian Prime Minister Justin Trudeau announced his country would send a water bomber plane to fight the Amazon blazes and contribute some $15 million to the effort.

The G7 also agreed to support a reforestation plan to be unveiled in September, the leaders said.

Brazil would have to agree to any reforestation plan, as would indigenous communities living in the world's biggest rainforest.

UN Secretary-General Antonio Guterres said new planting was needed "to preserve this universal heritage, which is absolutely essential for the well-being of the world's population."

He said the issue would be discussed during the UN General Assembly in New York in September. 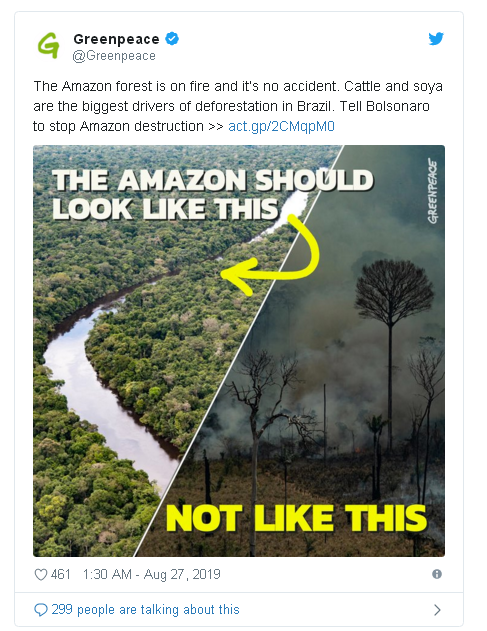 Mr Macron told France 2 it was hoped "at least 30 million" dollars could be raised for the project.

On Monday evening, the French leader met Brazilian indigenous chief Raoni Metuktire, who said he had asked Mr Macron to "help us preserve our lands."

"The forests and lands of Brazil help the entire planet live," said the chief, an advocate for indigenous rights.

Greenpeace executive director Jennifer Morgan welcomed the G7 aid, but said the club must also "stop fuelling the destruction of the Amazon through the import of agricultural products associated with deforestation and soil degradation."

- with additional reporting from AFP