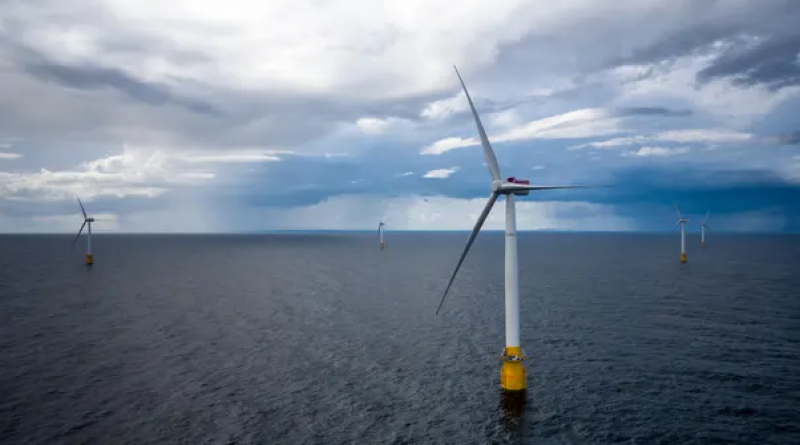 Technology could help power a clean energy transition if it can overcome hurdles of cost, design and opposition from fishing

In the stormy waters of the North Sea, 15 miles off the coast of Aberdeenshire, in Scotland, five floating offshore wind turbines stretch 574 feet (175 metres) above the water. The world’s first floating windfarm, a 30 megawatt facility run by the Norwegian company Equinor, has only been in operation since 2017 but has already broken UK records for energy output.

While most offshore wind turbines are anchored to the ocean floor on fixed foundations, limiting them to depths of about 165ft, floating turbines are tethered to the seabed by mooring lines. These enormous structures are assembled on land and pulled out to sea by boats.

The ability to install turbines in deeper waters, where winds tend to be stronger, opens up huge amounts of the ocean to generate renewable wind power: close to 80% of potential offshore wind power is found in deeper waters. In addition, positioning floating turbines much further off the coast helps avoid conflicts with those who object to their impact on coastal views.

Floating offshore wind is still in its early stages: only about 80 megawatts of a total of about 32 gigawatts (0.25%) of installed offshore wind capacity is floating. But some experts say the relatively new technology could become an important part of the renewables mix, if it can overcome hurdles including cost, design and opposition from the fishing industry.

The US has traditionally lagged behind Europe when it comes to offshore wind power, but that may be changing. Joe Biden has pledged to build more than 30GW of offshore wind by 2030. The Department of Energy says it has invested more than $100m in researching and developing floating offshore wind technology in an attempt to establish itself as a leader in the sector.

While the reliable winds and relatively shallow waters of the US east coast have made it the favored target for offshore wind projects, such as the recently approved large-scale Vineyard Wind off the coast of Martha’s Vineyard, on the west coast the waters are mostly too deep for fixed-platform turbines. It’s here that advocates hope floating wind will take off.

In May, the Biden administration and California’s governor, Gavin Newsom, announced a plan to bring floating offshore wind to California. They have identified two sites: a nearly 400-square mile area north-west of Morro Bay, which could host 380 floating wind turbines, and another further north off Humboldt Bay. Together these projects could bring up to 4.6GW of clean energy to the grid, enough to power 1.6m homes.

“[The announcement] was a real breakthrough,” said Adam Stern, executive director of the trade association Offshore Wind California. “At a time when the effects of climate change are evident in California every day, in the form of wildfires and drought conditions,” he said, “offshore wind can provide clean, reliable electricity for millions of California residents.”

The International Energy Agency estimates that for the world to stay on the pathway to carbon neutrality by 2050 it needs to add 390GW of wind power (80GW of which would be offshore) every year between 2030 and 2050.

It’s a big jump from current numbers, especially for the offshore wind industry, which installed just over 6GW of new capacity in 2020. But wind power has been growing as costs fall and countries look to move away from fossil fuels to meet climate goals.

How much floating wind will factor in is unclear. Countries including Norway, Portugal, South Korea and Japan are installing or planning floating wind projects, with more than 26GW of capacity estimated to be in the pipeline, according to one estimate.

“Without a doubt wind is a big part of the solution for going to zero,” said Michael Webber, an energy expert and engineering professor at the University of Texas at Austin. But he believes floating wind is likely to take time to scale up, predicting that onshore wind and fixed-bottom offshore wind would dominate for the next decade.

Big hurdles certainly remain. Cost is a significant one. Floating offshore wind generation costs are about double those of fixed offshore wind, although these are expected to fall as technology advances and supply chains improve. Estimates by the research body the National Renewable Energy Laboratory (NREL) suggest floating turbine projects could achieve cost parity with their fixed-bottom counterparts around 2030.

One wrinkle is the number of designs to anchor the floating turbines, which some experts believe will make it harder to drive down costs.

There are three main designs. The spar-buoy – the design of the Hywind floating turbines in Scotland – has a long, weighted cylinder tube which extends down from the turbine and below the ocean’s surface to balance it. Semi-submersible platforms, which are the most common for installed and planned projects, are modular and made up of floating cylindrical structures secured by mooring lines. The tension-leg structure has a smaller platform anchored to the seabed with taut mooring lines.

“I’ve lost count of how many concepts are actually out there,” said Po Wen Cheng, head of wind energy at the University of Stuttgart in Germany. “Ford didn’t make the car affordable for the big masses by making 30 different types of car – they just made a Model T. If we really want to lower the cost, we cannot tolerate so many different concepts,” he said.

Parts of the fishing industry have also expressed concerns that offshore wind could interfere with their equipment, obstruct fishing areas and negatively affect their livelihoods.

The first floating windfarm in the US may end up in Maine, where the University of Maine, RWE Renewables and the Mitsubishi subsidiary Diamond Offshore Wind are developing a small demonstration project that would generate 12MW of energy.

It has faced enormous opposition from lobster fishers who say the turbines interfere with their business. They reached a compromise in July: this pilot project will go ahead but the state legislature approved a ban on new industrial wind projects in state waters until March 2031.

Fishermen have rung alarm bells about California’s projects, too. “Far too many questions remain unanswered regarding potential impacts to marine life,” said Mike Conroy, the executive director of the Pacific Coast Federation of Fishermen’s Associations in a May statement about plans for floating wind in the state.

Walt Musial, NREL’s lead of offshore wind research, said even a large-scale deployment of offshore wind along the east or west coast would take up only a tiny portion of the ocean and turbines would be carefully sited. But he stressed the continued need for good communication “to ensure optimal coexistence and to help the fishing community adapt and continue to access the space within the turbines for fishing”.

The California government foresees offering commercial leases for Morro Bay and Humboldt Bay next year. Stern is hopeful that floating offshore wind would create thousands of well-paying clean energy jobs in the state, as well as accelerating the retirement of natural gas plants, reducing pollution in communities that disproportionately bear the burden of environmental impacts.

“There are a lot of challenges to get floating wind turbines running in US waters,” said Po Wen Cheng, “but there’s no doubt about the potential.”

How floating wind turbines could change the global energy map

Offshore wind turbines could number 30,000 by 2030 – new ideas in ocean engineering are needed to install them