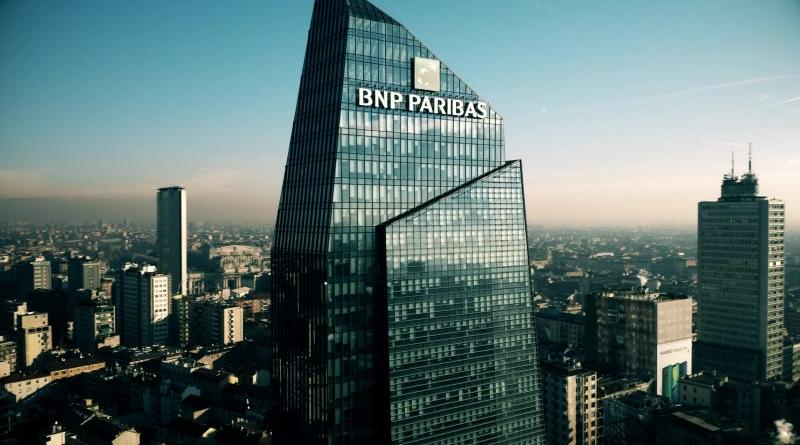 More than 50 CEOs from the banking and insurance sector – including household names such as BNP Paribas, AXA, Allianz, and Santander – have joined the “green recovery alliance” in the European Parliament.

The alliance was launched last month at the initiative of Pascal Canfin, a French centrist MEP who chairs the European Parliament’s committee on environment and public health.

At the time, it included 12 environment ministers, 79 MEPs, 37 CEOs and business associations, as well as environmental groups, trade unions and think tanks.

“All of these players, including the two largest European insurance companies, three of the largest Spanish and French banks, and European investment funds from 10 European countries, recognise the importance of aligning economic recovery after the coronavirus crisis with the ecological transition in order to save our economy and transform it,” said a statement from the alliance.

“Unlike the 2008 crisis, investors and banks now have a horizon to reinvest in the economy, in line with carbon neutrality by 2050: the Green Deal,” it added.

Signatories of the alliance say they are committed to supporting post-pandemic “stimulus transformation plans” that put the fight against climate change and biodiversity loss at the centre of Europe’s economic policy.

“Today, it is all the more important to work with the actors of the financial sector, because the transition to climate neutrality implies major investments,” said Canfin. “We cannot limit global warming well below 2 degrees without banks and asset managers aligning their portfolios with this objective,” he said.

Jean-Laurent Bonnafé, the CEO of BNP Paribas, has led a coalition of 92 French business leaders urging for a green recovery from the crisis. In a joint letter, the coalition calls for recovery efforts to focus in three sectors:

“The benefits of these green investments include improved air quality, population health and quality of life in cities. Successfully implementing this emergency plan will also give us greater legitimacy as active participants in the European Green Deal,” says a statement by the French coalition. 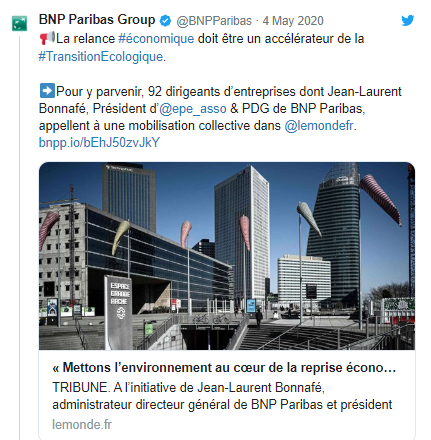 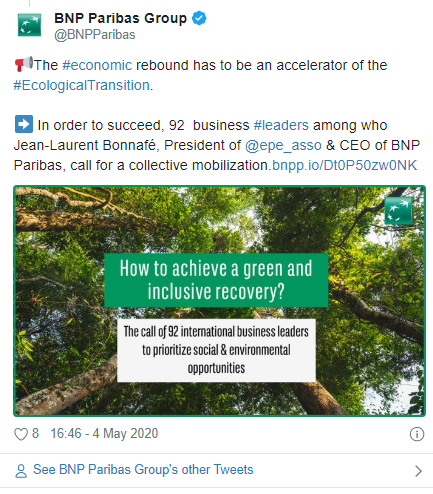 The move by financiers follows similar statements by the Institutional Investor Group on Climate Change (IIGCC), which manages more than $34 trillion in assets, nearly half the world’s invested capital.

On Monday (4 May), the IIGCC published a statement with other investor groups urging governments to ensure the economic response to the pandemic is aligned with the Paris Agreement on climate change and supports action to achieve net-zero emissions.

“As governments pursue efforts to recover from this economic downturn, they should not lose sight of the climate crisis,” says the statement by The Investor Agenda, an initiative developed for the global investor community to accelerate action against climate change.

“Ultimately, in their recovery plans, governments should prioritise sustainability and equity, and accelerate the transition to a net zero emissions economy to mitigate climate risk, create new jobs and catalyse the sustainable deployment of private capital,” the statement says.

Investors also had a warning for governments rushing to bail out polluting companies. “Recovery plans that exacerbate climate change would expose investors and national economies to escalating financial, health and social risks in the coming years,” they said.

“Governments should avoid the prioritisation of risky, short-term emissions-intensive projects,” the statement added, warning: “The path we choose in the coming months will have significant ramifications for our global economy and generations to come.”

Meanwhile, a new survey led by Nobel Prize winner Joseph Stiglitz shows officials from finance ministries and central banks are broadly supportive of green measures in the upcoming recovery plans that will be adopted in the wake of the coronavirus crisis.

Drawing on this survey as well as learnings from the 2008 financial crisis, the economists found that green projects create more jobs, deliver higher short-term returns per dollar spend and lead to increased long-term cost savings, by comparison with traditional fiscal stimulus.

Examples of climate-positive EU spending following the global financial crisis of 2007-2009 are energy efficiency retrofits in Germany, investment in high-speed rail expansion in Italy, the EIB’s Fund for Energy, Climate Change and Infrastructure, and EU spending on interconnectors. 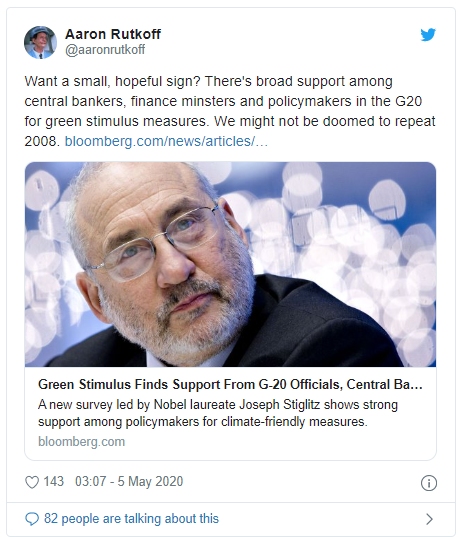