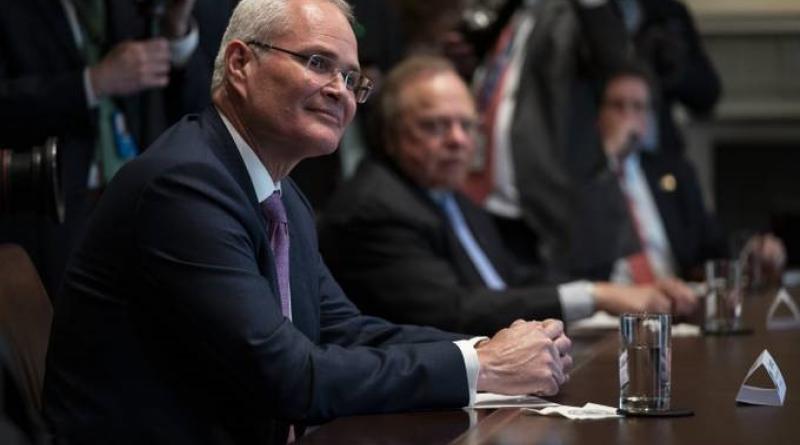 ExxonMobil dismissed the idea of setting a date by which it will sharply reduce its contributions to climate change — bucking a recent trend among major oil companies.

Darren Woods, the company’s chairman and chief executive, told investors Wednesday that it is up to consumers and the governments they elect to set target dates cutting greenhouse gas emissions — not a single corporation such as his.

“As an individual company, we can't drive that but we can certainly participate in it,” Woods said during the company’s annual shareholders’ meeting, held virtually because of the coronavirus pandemic.

Woods emphasized that Exxon, which during the 1990s and much of the 2000s denied the idea of man-made climate change, today takes the issue seriously.

Exxon has set a series of short-term goals, promising to cut methane emissions by 15 percent and reduce the burning of excess gas at wells by  by 20 percent between 2016 and 2020.

And in a break with President Trump, Exxon backs the 2015 Paris climate agreement, which seeks to limit global warming to 2 degrees Celsius this century. The company also supports federal regulation of methane emissions at a time when the Trump administration is rolling back rules put in place under President Barack Obama to stop the leaking of that potent greenhouse gas from oil operations.

But unlike other oil majors, Exxon has declined to set a long-term deadline for reaching various emissions targets.

Nearly all Western major oil and gas firms are under pressure — from politicians, activists and even their investors — to do more to slow down the buildup of heat-trapping pollution in the atmosphere. Several European oil companies earlier this year set mid-century targets for reducing emissions.

“Exxon is looking more and more isolated in its refusal to even engage with the idea” of a long-term emissions-reduction target, said Andrew Logan, series director of the oil and gas program at Ceres, a nonprofit group of environmentalists and investors.

BP, for one, said that by 2050 it will slash greenhouse gas emissions from much of its own operations to net zero and cut the carbon content of its products by 50 percent. Royal Dutch Shell aims to reduce the carbon intensity of the fuel it sells by 65 percent by that year.

And Total, a French oil multinational, went even further by promising to cut emissions from both its own drilling and refining operations, and from the burning of its gasoline and other products in Europe by the middle of the century.

The companies are still fuzzy on many of the details of their plans, which will likely depend on the development of a cheap way of capturing carbon dioxide from the air.

The oil companies generally face more political pressure in Europe to cut carbon emissions than those in the United States.

Even so, some American companies are setting their own mid-century goals. During its stockholder meeting Wednesday, for example, Atlanta-based Southern Co., a gas and electric utility, announced a new aim of achieving net-zero carbon emissions by 2050.

And investors at Chevron, the second-biggest U.S. oil company, compelled the board in a vote Wednesday at its own shareholders meeting to issue a report on the company's climate lobbying — a win for activist shareholders who have long clamored for more transparency from the company.

“Exxon and Chevron continue to give lip service to the goals of the Paris agreement, while failing to clarify for investors if or how they will reduce their emissions in alignment with the Paris agreement,” said Danielle Fugere, president of As You Sow, a nonprofit involved in shareholder advocacy.

Like Exxon, Chevron has not set a date by which it will cut emissions, but it has tied executive and employee pay to reducing methane and excess gas burning by 2023.

Exxon is under more pressure than ever from investors to address climate change.

One of Exxon’s biggest shareholders, the money manager BlackRock, cast votes during the investors’ meeting in favor of splitting the CEO and chairman roles and against the reelection of members of the board of directors because of how the company manages the risks of climate change.

Pointing out the lack of new greenhouse gas targets, the investment management company wrote in  a bulletin that Exxon does not have a proper “sense of urgency” when it comes to climate change. BlackRock officials, however, did note that Exxon recently told them it is “developing future targets” for greenhouse gas emissions.

During the virtual stockholders' meeting, Woods said Exxon does not plan to invest in solar and wind power, arguing the company has no “unique advantage” in developing those renewable sources of energy.

A “breakthrough” technology, such as one capturing carbon dioxide from the air, “would allow us to then start to set some targets,” Woods added.

Church fund urges other ExxonMobil investors to sack board over climate.

ExxonMobil’s slide from the Top Ten of the S&P 500 ‒ historic turning point for the company.