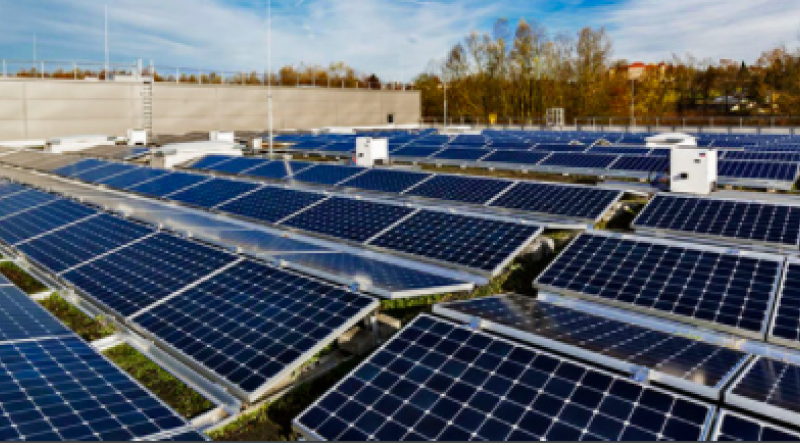 Although photovoltaic modules convert sunlight into electricity without producing emissions, PV-generated solar energy does produce CO2 emissions during production, transport and at the end of module life. These emissions are, however, very low: About 40 times less CO2 is produced per kilowatt-hour with PV electricity than with electricity generated by lignite. In the study, Fraunhofer ISE calculated the carbon footprint of six monocrystalline silicon photovoltaic modules. Modules manufactured in China, Germany and the European Union, as well as a module with glass-foil laminate and one with glass-glass laminate were investigated.

"If I want to install a photovoltaic system in a European location with average irradiation values, I have a great influence on its climate friendliness with the choice of my PV modules," explains Dr. Holger Neuhaus, Head of Department for Module Technology at Fraunhofer ISE. "With PV modules manufactured in the EU, I save 40 per cent in CO2 emissions compared to modules imported from China."

This is mainly due to the energy mix of the respective countries and less to the emissions generated during transport. At 50 to 63 per cent, the share of energy required in manufacturing is the most influential factor on the carbon footprint of a solar module. For a PV module from China, the CO2 emissions generated during transport to the EU account for about 3 per cent of the total emissions.

Glass-glass PV modules (b) do not require an aluminium frame and therefore have a lower carbon footprint than PV modules with a backsheet (a).

"Due to the significantly lower CO2 emissions during production and the further strong increase in demand for more climate-friendly PV modules worldwide, it is now a matter of establishing the PV production chain in Europe quickly and with a great deal of commitment," concludes Prof. Andreas Bett, Institute Director at Fraunhofer ISE. China has a dominant market position: In 2019, China produced 68 per cent of the polysilicon, 96 per cent of all wafers, 76 per cent of all solar cells and 71 per cent of all PV modules.

Module designs with glass instead of back foils reduce CO2 emissions

Overall, the study results show that the CO2 emissions for glass-foil modules (glass-glass modules) are 810 (750) in China, 580 (520) in Germany and 480 (420) kilograms of CO2 equivalent per kilowatt in the European Union. The study is based on new production data collected at the institute in collaboration with industry. "This is the real news. Compared to life cycle analyses based on older data sets that are still used today, the study showed that the carbon footprint of PV modules has improved by about 80 per cent in recent years. This is due to improvements in the silicon yield, the manufacturing processes of module efficiency and the CO2 intensity of power generation," explains Dr. Holger Neuhaus. (mfo)

Scaling Up The Production Of Highly Efficient Solar Modules.