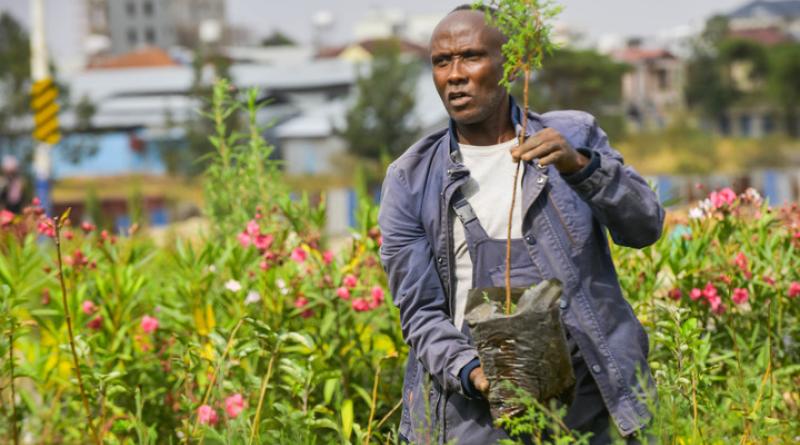 As Ethiopia braces itself for achieving the aspiration of building a green economy, a government-led massive tree planting initiative has gained momentum across the east African country.

ADDIS ABABA, July 24 (Xinhua) -- As Ethiopia braces itself for achieving the aspiration of building a green economy, a government-led massive tree planting initiative has gained momentum across the east African country.

The Green Legacy campaign, a personal initiative of Ethiopian Prime Minister Abiy Ahmed as part of his ambition to recover Ethiopia's lost forests, was launched some four years ago, with an overarching goal of planting 20 billion seedlings in four consecutive years.

As the initiative gets traction among Ethiopians from all walks of life, this year's edition of the campaign, which marks the end of the ambitious initiative, started last month under the theme "Our Legacy for Our Generation."

One of the ardent participants of the tree planting initiative is Getachew Birhanu, a civil engineer in Addis Ababa, the capital of Ethiopia. Birhanu said he has already planted close to 35 seedlings over the past few weeks alone, together with his wife and two young children.

During the course of the recently-started Ethiopian rainy season alone, the ambitious Green Legacy initiative will see the plantation of some six billion tree seedlings throughout the East African country in the coming months.

"As a father of two toddlers, I believe we are truly leaving behind our legacy for our country and the generations to come. This is something we should really be proud of," Birhanu told Xinhua one day in early July after he planted seedlings on the outskirts of Addis Ababa, accompanied by his wife and children.

Birhanu, who had been actively participating in all the previous tree planting campaigns, said he would continue planting trees even after the end of the four-year national campaign as it would propel Ethiopia's green development efforts.

Over the past three years, the East African country has planted more than 18 billion seedlings, according to figures from the Ethiopian government.

Experts blame the growing rate of deforestation for the rise in the adverse effects of climate change in Ethiopia as Africa's second most populous nation lost its abundant forest coverage, with worsening trends over the past few decades.

According to the Ethiopian Environmental Protection Authority (EEPA), Ethiopia only contributes to an estimated 0.04 percent of the global greenhouse gas emission, but is highly vulnerable to the impacts of climate change, mainly due to its high dependence on rain-fed agriculture and natural resources, as well as its relatively low adaptive capacity.

"Ethiopia is contributing very little toward climate change but being affected very hugely," he said. "Biodiversity loss is another challenge, which is also a worldwide problem."

According to Garedew, as the adverse effects of climate change persist, heavy rains, flooding and soil erosion are putting both urban and rural infrastructure at risk, particularly for the vulnerable segment of the population.

According to EEPA figures, there has been considerable evidence of climate change impacts in Ethiopia over the last 50 years.

At the national level, temperatures have increased by an average of around 1 degree Celsius since the 1960s. Rainfall is subject to high inter-annual and intra-annual variability, in which yearly variation around the mean rainfall level is 25 percent and can increase to 50 percent in some parts of the country.

The Ethiopian PM, in his message on the launch of this year's campaign, said Ethiopia is gravely affected by climate change-induced challenges and is considered a climate vulnerable country.

"Our immediate and practical approach to addressing climate change is the Green Legacy Initiative," Ahmed said, as he called on Ethiopians to make this year's edition of the tree planting initiative a success.

According to the Ethiopian government figures, with an annually improving survival rate of around 80 percent of the newly planted seedlings, the initiative is ultimately contributing to the creation of new forest areas across Ethiopia.

Of this year's seedlings prepared for planting, agroforestry trees make up about 52 percent and forestry trees account for 47 percent, while the remaining are ornamental trees, according to figures from the Ethiopian government.

Billene Seyoum, a press secretary for the Office of the Prime Minister of Ethiopia, told journalists recently that one of the key successes of the green legacy initiative has been its instrumental role in mobilizing millions and creating public awareness, eventually leading to a significant decline in the rate of deforestation over the past couple of years.

Seyoum also emphasized that the proliferation of more than 120,000 nursery sites throughout the country has enabled job creation for various sections of society