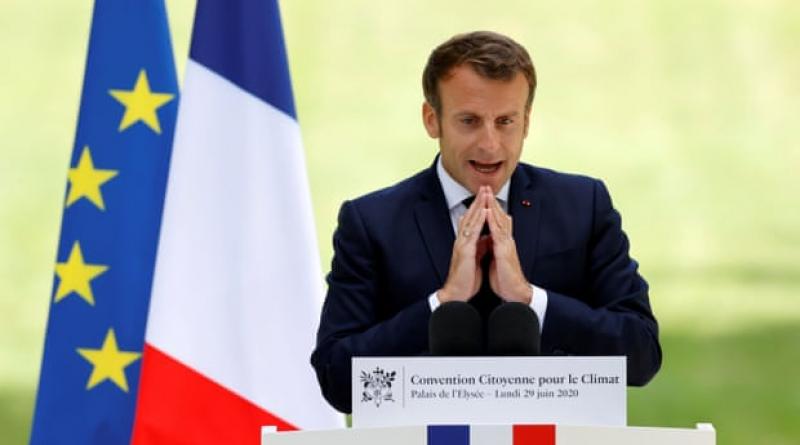 Emmanuel Macron has promised an extra €15bn (£13.7bn) for measures to combat the climate crisis over the next two years and a referendum on whether to introduce the crime of “ecocide” for harming the environment.

The measures were announced just hours after environmental candidates sparked a green wave across France with major gains in local elections in which the president’s governing party failed to make its mark.

At a meeting with members of the Citizens’ Commission for the Climate – a committee of 150 randomly chosen French people that reported back after a nine-month deliberation last week – Macron promised extra funding and strong measures.

He said he accepted all but three of the 149 recommendations put forward by the commission.

Macron said he hoped to implement the measures immediately and a new law would be drawn up before the end of summer. He congratulated the commission for having “made the choice of putting ecology at the heart of our economic model”, but rejected its suggestion for a “dividend tax” on investments and postponed a debate on whether to introduce a 110km/h speed limit on French roads.

The Citizens’ Commission for the Climate is part of a democratic experiment in France where a group of citizens, ranging from teenage school pupils to bus drivers and retired railway staff, were asked to define government environmental policy for the remaining two years of Macron’s mandate – and specifically how to cut the country’s carbon emissions by 40% by 2030.

It came up with proposals grouped under five main themes: transport, housing, work and production, food, and consumption of natural resources.

The results of France’s municipal elections in which the environmental party Europe Écologie Les Verts made significant gains in a vote marked by the coronavirus crisis and historic abstention, made Macron’s response even more crucial for his centrist La République en Marche party (La REM).

The vote was a predictable blow to La REM, which has fractured France’s political landscape nationally but made little headway in local elections outside Paris or in “la France profonde”.

The ecologists took several major cities including Lyon, Bordeaux, Strasbourg, Marseille and Besançon, and many other large towns in Sunday’s vote. In Paris, where the Socialist mayor, Anne Hidalgo, in alliance with EELV, was reelected with a significant majority on a programme that prioritised tackling pollution, the climate crisis and clean energy.

The environmentalist and MEP Yannick Jadot said the result was a “redrawing of the political landscape” around ecological issues.

“People are trying to make sense of things, our way of life, our housing, the density of cities, food, travel, solidarity, new democratic methods … Part of the population has a wish, a desire, for real change in our societies that is socially and economically realistic,” Jadot told Ouest-France newspaper.

“There will obviously be a before and after the 2020 local elections. It’s a real political turn in our country,” he said.

Greenpeace accused Macron of watering down the commission’s proposals using “jokers” to get out of important measures.

“The message sent by the municipal elections is clear: ecology and the climate crisis are no longer only a distant preoccupation for French people, but a political priority that must result in acts, concrete measures and a general goal in keeping with the Paris climate accord. The Citizen’s Commission has said the same thing and it will need more than a lovely speech from the Elysée to satisfy the deep expectations,” said Jean-François Julliard, the director general of Greenpeace France.

Clément Sénéchal, responsible for Greenpeace France’s climate campaign, said the government could make its actions match the president’s words by making state aid for coronavirus-hit businesses, including carmakers and airlines, dependent on their willingness to introduce “social and environmental measures”.

“This would force polluting businesses to change their model and get behind the Paris agreement,” Sénéchal said.

The president is widely reported to be considering a government reshuffle including the firing of his popular prime minister, Édouard Philippe, who was elected mayor of Le Havre on Sunday.

How changes brought on by coronavirus could help tackle climate change.