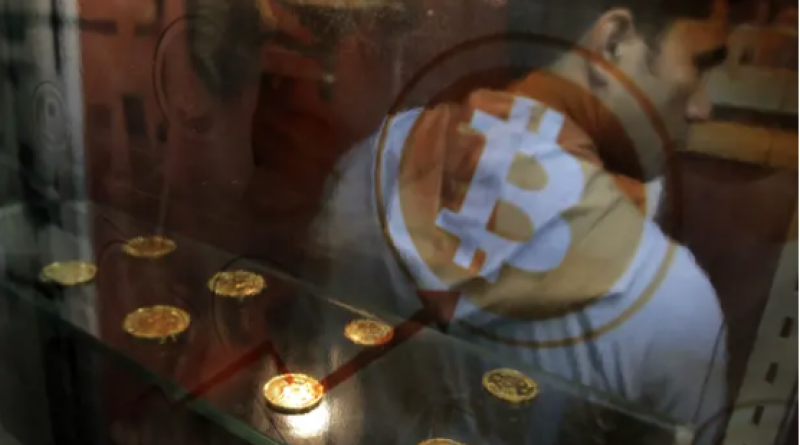 Bitcoin mining – the process in which a bitcoin is awarded to a computer that solves a complex series of algorithm – is a deeply energy intensive process.

It’s not just the value of bitcoin that has soared in the last year – so has the huge amount of energy it consumes.

The cryptocurrency’s value has dipped recently after passing a high of $50,000 but the energy used to create it has continued to soar during its epic rise, climbing to the equivalent to the annual carbon footprint of Argentina, according to Cambridge Bitcoin Electricity Consumption Index, a tool from researchers at Cambridge University that measures the currency’s energy use.

Recent interest from major Wall Street institutions like JPMorgan and Goldman Sachs probably culminated in the currency’s rise in value and an endorsement by Tesla’s Elon Musk helped drive its recent high as investors bet the cryptocurrency will become more widely embraced in the near future. 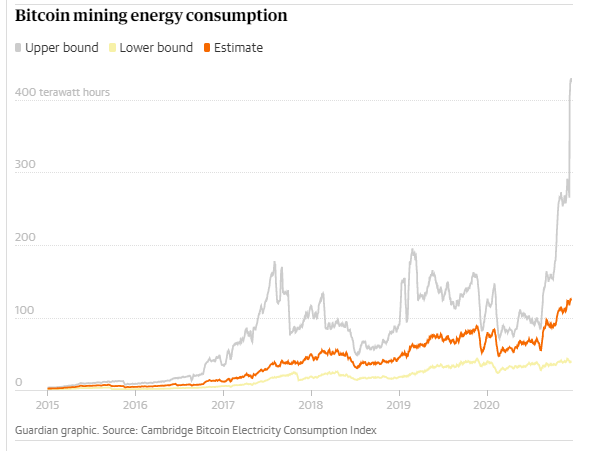 While the recent fall has dented Musk’s fortune, bitcoin also poses a threat to the company’s mission toward a “zero-emission future” and poses serious questions for governments and corporations looking to curb their own carbon footprints.

Bitcoin mining – the process in which a bitcoin is awarded to a computer that solves a complex series of algorithms – is a deeply energy-intensive process.

Earlier in bitcoin’s relatively short history – the currency was created in 2009 – one could mine bitcoin on an average computer. But the way bitcoin mining has been set up by its creator (or creators – no one really knows for sure who created it) is that there is a finite number of bitcoins that can be mined: 21m. The more bitcoin that is mined, the harder the algorithms that must be solved to get a bitcoin become.

Now that over 18.5m bitcoin have been mined, the average computer can no longer mine bitcoins. Instead, mining now requires special computer equipment that can handle the intense processing power needed to get bitcoin today. And, of course, these special computers need a lot of electricity to run.

The amount of electricity used to mine bitcoin “has historically been more than [electricity used by] entire countries, like Ireland”, said Benjamin Jones, a professor of economics at the University of New Mexico who has researched bitcoin’s environmental impact. “We’re talking about multiple terawatts, dozens of terawatts a year of electricity being used just for bitcoin … That’s a lot of electricity.”

Proponents of bitcoin say that mining is increasingly being done with electricity from renewable sources as that type of energy becomes cheaper, and the energy used is far lower than that of other, more wasteful, uses of power. The energy wasted by plugged-in but inactive home devices in the US alone could power bitcoin mining for 1.8 years, according to the Cambridge Bitcoin Electricity Consumption Index.

But environmentalists say that mining is still a cause for concern particularly because miners will go wherever electricity is cheapest and that may mean places that use coal. According to Cambridge, China has the most bitcoin mining of any country by far. While the country has been slowly moving toward renewable energy, about two-thirds of its electricity comes from coal.

Mining rigs can move from place to place depending on where energy is cheapest, which makes mining particularly hard to track.

“The places where you mine [bitcoin] can be moved around and, in some cases, you don’t even know where they are,” said Camilo Mora, a professor of geography and environment at the University of Hawaii.

A single transaction of bitcoin has the same carbon footprint as 680,000 Visa transactions or 51,210 hours of watching YouTube, according to the site.

A paper from 2018 from the Oak Ridge Institute in Ohio found that one dollar’s worth of bitcoin took 17 megajoules of energy, more than double the amount of energy it took to mine one dollar’s worth of copper, gold and platinum. Another study from the UK published last year said that computer power required to mine Bitcoin quadrupled in 2019 compared with the year before, and that mining has had an influence in prices in some power and utility markets.

Bitcoin’s advocates have made it clear that they believe any environmental costs that come with mining bitcoin are worth the broader impacts it could have on society.

“Bitcoin would not be able to fulfill its role as a secure, global value transfer and storage system without being costly to maintain,” reads a defense against bitcoin criticism from Ria Bhutoria, director of research at Fidelity Digital Assets.

“Computers and smartphones have much larger carbon footprints than typewriters and telegraphs. Sometimes a technology is so revolutionary and important for humanity that society accepts the tradeoffs,” wrote investor Tyler Winklevoss on Twitter.

Some have pointed out that there does not have to be a tradeoff between cryptocurrency and the environment. The creators of ethereum, considered the second most popular type of cryptocurrency after bitcoin, have promised to change the currency’s algorithm to make its mining more environmentally friendly.

Vitalik Buterin, the computer scientist who invited ethereum, told IEEE Spectrum that mining cryptocurrency can be “a huge waste of resources, even if you don’t believe that pollution and carbon dioxide are an issue”, Buterin said. “There are real consumers – real people – whose need for electricity is being displaced by this stuff.”

Currently, ethereum’s mining works similarly to bitcoin where the most powerful computers have an edge in getting the most bitcoin as computers compete to complete a transaction first. Ethereum’s developers are working on changing that system so that miners enter a pool and are randomly selected to complete the transaction and receive an ether in return. This method, called “proof-of-stake”, guarantees that less electricity will be used to mine the currency.

But with bitcoin still reigning as the top cryptocurrency and, with endorsements from established companies and investment banks, the currency’s environmental impact is only likely to grow.

When it comes to electricity, “the computer doesn’t care. The computer is just getting the electricity to run, but where its electricity comes from makes a huge difference [for the environment],” said Mora.