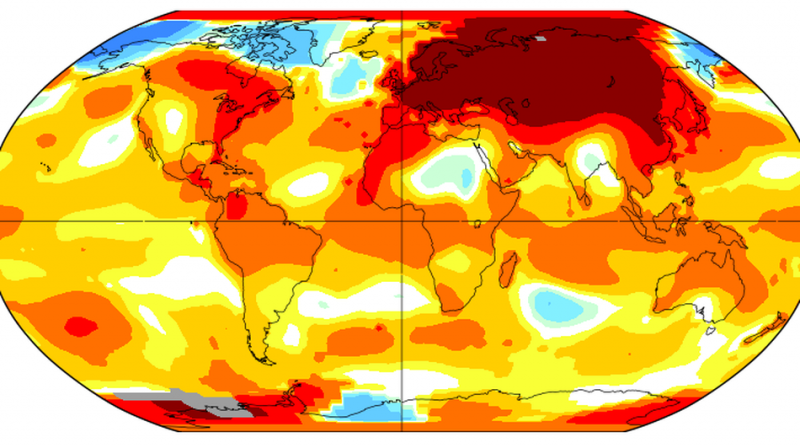 The American economy has seriously sputtered during the coronavirus pandemic, but the planet's relentless warming trend hasn't.

After Earth experienced its second-hottest year in 140 years of record-keeping in 2019, the first few months of this year have either broken historic monthly records, or come close. January 2020 was the warmest January on record. February 2020 was the second hottest such month on record. And on Monday, the European Union's climate monitoring agency EU Copernicus reported that March 2020 was "on par" with the second and third warmest Marches on record.

Earth's warming atmosphere is reacting to a skyrocketing rise of the potent greenhouse gas carbon dioxide — now at its highest levels in at least 800,000 years, but more likely millions of years. This same gas (though much more of it) is responsible for the blistering temperatures on Venus.

"The continued onslaught of record and near-record global temperatures is a reminder that, while we’re understandably preoccupied with another crisis (the Coronavirus pandemic), a more formidable one in the grand schemes of things looms in the background," said climate scientist Michael Mann, director of the Earth System Science Center at Penn State University.

The consequences of a warmer atmosphere are countless. Most glaciers on Earth are fast receding. Wildfires are overpowering us. Meanwhile, the oceans absorb over 90 percent of the heat created by human activities. These boosted, above-average water temperatures amplify the marine heat waves that cause the bleaching and widespread deaths of coral.

"As I write this sentence, the Great Barrier Reef is suffering its third major bleaching event in the space of five years, an unprecedented and foreboding development," said Mann. "The ever-worsening nature of the climate crisis and the need to address it must guide any policy actions that are taken to address the Coronavirus crisis."

For example, as the federal government spends over $2 trillion to cushion the inevitable health, economic, and environmental blows from the pandemic, the House Select Committee on the Climate Crisis recommends investing in public transit and electric vehicle manufacturing to "create new jobs and reduce carbon pollution from the transportation sector." Perhaps this spending will be emphasized in the next major stimulus.

It's already likely that 2020 will end up as one of the warmest years on record. After an exceptionally warm January, NOAA says there's a 98 percent chance of 2020 becoming one of the top five warmest years ever recorded. What's more, there's not even expected to be an El Niño event this year, which is a large-scale warming of the equatorial Pacific Ocean — which adds warmth to the atmosphere.

"Even as the pandemic grips the globe, the climate crisis remains unrelenting, with recent record or near-record temperatures signaling the onset of what might turn out to be the warmest year ever without the extra warming boost of an El Niño," said Jon Overpeck, a climate scientist at the University of Michigan.

The big picture, however, is already clear:

Though the pandemic — and the resulting shutdown of businesses amid critical social distancing measures — will likely impact global economies enough to slow the continued rise in atmospheric carbon dioxide levels, this slowdown certainly won't reverse Earth's warming trend. Over the last 150 years or so, humanity has loaded the atmosphere with an enormous "pile" of CO2. This pile won't be diminished, even by a global recession. Previous crises and recessions failed to stop climate change, too.

"The pile is still there," Ralph Keeling, the director of the Scripps CO2 Program at the Scripps Institution of Oceanography, told Mashable. "We're not getting rid of the pile."

CO₂ emissions have bounced back after previous global economic crises, & this is likely to be the case for #COVID19 (either a fast or slow bounce). 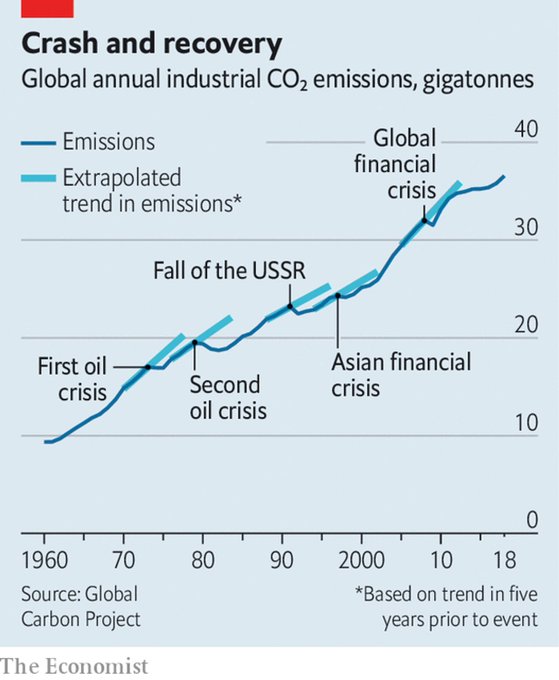 Overall, according to EU Copernicus, the last 12 months saw "few places" that experienced below-average temperatures, such as central North America and Antarctica.

"Earth’s climate system and climate scientists are all warning of the worsening climate crisis to come," said Overpeck.

UPDATE: April 6, 2020, 5:25 p.m. EDT This post has been updated to include additional context from climate scientist Jon Overpeck.