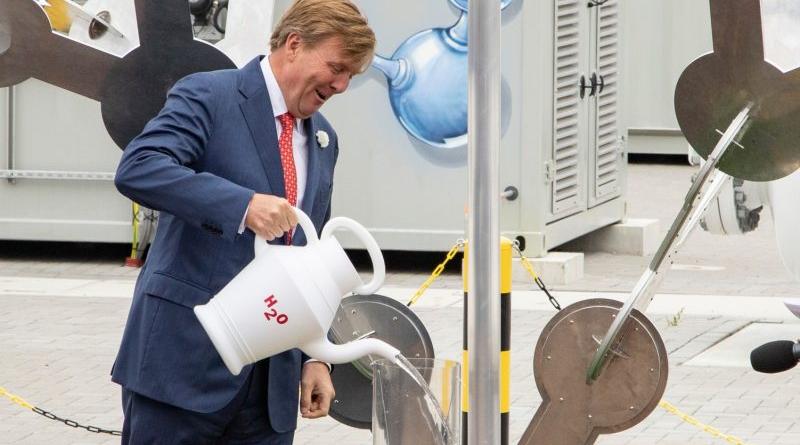 The European Commission should create an EU-wide market for hydrogen “as soon as possible” rather than wait for renewable energy-based varieties to be commercially available, a top Dutch ministerial envoy has said.

Green hydrogen – the sort coming from renewable electricity – is considered as a kind of Holy Grail by clean energy advocates because it is virtually emissions-free and can be stored for prolonged periods of time, unlike electricity.

The trouble is green hydrogen is not yet being produced on a commercial scale, a process that could take more than a decade. And energy experts say grey hydrogen – the sort coming from natural gas – is a necessary stepping stone in order to get there.

“What they call grey hydrogen, which is already being used in industry – that is an obvious starting point because it’s already happening,” said Noé van Hulst, hydrogen envoy at the ministry of economic affairs and climate policy in the Netherlands, who spoke at a recent EURACTIV event.

Around 70 million tonnes of hydrogen are currently being used globally, mostly for oil refining and chemical production, according to the International Energy Agency (IEA).

The main upside is that hydrogen emits no CO2 when burned, and can provide clean fuel for process industries like steelmaking, petrochemicals and cement, which are otherwise heavily carbon-intensive. The downside is that this hydrogen is currently made almost entirely from fossil fuels, with significant CO2 emissions associated to it.

So for Noé van Hulst, the solution is simple: “You just need to start greening grey hydrogen” using carbon capture and storage (CCS) to bury the emissions underground. And that is called blue hydrogen, he told participants at the EURACTIV event, saying this will help scale up the market.

“Let’s integrate that market as soon as we can,” van Hulst pleaded, calling for “common standards” at EU level for clean hydrogen production.

“We need action. We need projects that come to final investment decisions in the next ten years. Otherwise, we’re going to be way too late,” he warned.

Environmental activists see blue hydrogen with scepticism, however, saying it is used as an excuse by the oil and gas industry to prolong fossil fuel operations.

The European Commission, for its part, has adopted a rather cautious stance, saying energy savings and renewable electricity are the top priorities for the time being.

“It’s clear that energy efficiency and renewables will be at the core of the energy transition,” said Tudor Constantinescu, principal adviser on energy at the European Commission.

That said, “all solutions will have to play a role” to reach carbon neutrality by 2050, the EU official admitted. And “hydrogen may be a missing link in the energy transition” because it can help decarbonise hard-to-abate sectors of the economy, like process industries and heavy-duty transport, Constantinescu said.

But the Commission hasn’t made up its mind yet on the type of incentives it could apply and is looking into all options in view of its forthcoming Gas Package of legislation, expected to be tabled next year.

For van Hulst, this shows a clear lack of urgency. Policy incentives are needed now in order to kick-start the nascent EU market for hydrogen, he argued. And colour doesn’t really matter at this stage because the volumes are currently too small.

“We are pushing both green and blue hydrogen,” van Hulst said. “Why? Because if you start to calculate the volumes that are needed over the next ten years, you will not get there only with green hydrogen.”

“It’s not a silver bullet, but it’s an essential missing link in the energy transition for those sectors,” van Hulst said referring to hydrogen’s potential to decarbonise industry and transport.

Environmentalists do not share the same sense of urgency, however. “What matters is not the colours, it is greenhouse gas neutrality and costs,” said Dries Acke, from the European Climate Foundation (ECF), a campaign group.

“And that is something we should not compromise on,” he insisted, calling for clear definitions of renewable and low-carbon gases – including hydrogen – based on their CO2 footprint. “This is not a trivial exercise,” Acke stressed, reminding that Europe only has 30 years left to reach net-zero emissions.

“And to be frank, we have no time for another biofuels disaster,” he said, referring to the U-turn policymakers made at the turn of the decade when they realised that some biofuel varieties could cause land displacements that worsen climate change.

“So let’s take our time to define this well and set the market off correctly,” Acke said.

The European Commission has committed to introduce an environmental taxonomy for low-carbon gases such as hydrogen and biogas. Determining the carbon footprint of those gases “is the key question that we have to answer,” said Stefaan Vergote, adviser for emission reduction strategies at the European Commission’s climate action directorate.

“We really need to know what the numbers are,” Vergote stressed, saying the assessment on whether a gas is zero- or low-carbon “needs to be performance-based” and rely on objective measurement criteria. “That is the essential feature that we need to strive for,” he told delegates at the EURACTIV event.

Other policy instruments are relatively close at hand. The EU’s recently updated renewable energy directive introduced a system of guarantees of origin (GOs) to certify electricity produced from renewable sources, Constantinescu said. And that system could be applied to hydrogen, the EU official said.

The difficulty, he explained, is to define a way of transferring those certificates from one sector to another or from one energy carrier to another. That will be addressed as part of the thousands of delegated acts that the Commission is currently preparing in order to implement the directive, Constantinescu said.

Other options could be to promote hydrogen in specific sectors like aviation, Acke said, suggesting an “electro-fuels mandate” for aircraft in order to kick-start the market.

“Why don’t we create an electrolyser alliance,” Acke further suggested, proposing to mirror the European Battery Alliance that the European Commission launched almost two years ago.

In fact, Europe is already a global leader in developing electrolysers used in green hydrogen production.

“Most of the companies in the world producing electrolysers are in Europe,” said Mirela Atanasiu, from the Fuel Cells and Hydrogen Joint Undertaking, a public-private research alliance.

Some 246 hydrogen demonstration projects have already benefitted from EU funding since the alliance was launched more than ten years ago. And electrolysers absorbed 80% of that funding, Atanasiu said.

According to her, heavy-duty haulage, aviation and maritime transport are all “no-regret” options when it comes to hydrogen use.

Toyota to produce hydrogen from renewable energy at Motomachi.