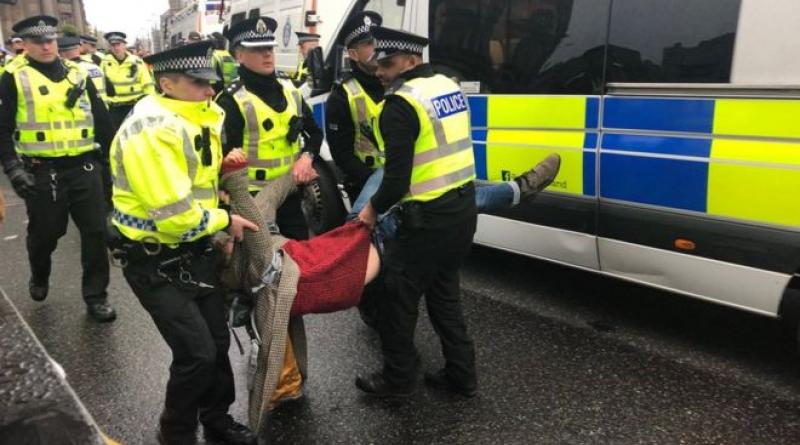 Police made 29 arrests as about 300 climate change protesters blocked one of the main roads into Edinburgh's city centre.

Supporters of Extinction Rebellion Scotland targeted North Bridge as part of the International Rebellion, which has taken place in a number of cities.

A "critical mass" bike ride began the Edinburgh protest at 14:00, with cyclists coming from around the city.

The bridge occupation, which caused long tailbacks, lasted until 21:00.

Police Scotland later tweeted that 29 people were arrested for breach of the peace.

Organisers said they wanted to disrupt "business as usual" and highlight the "climate and ecological catastrophe unfolding across the globe".

The aim was for the cyclists to slow the traffic before stopping it altogether.

He said: "I am not advocating violence. We have to do all we can to bring this serious problem to the attention of the world, and if that means that I run the risk of being arrested and fined, then so be it." 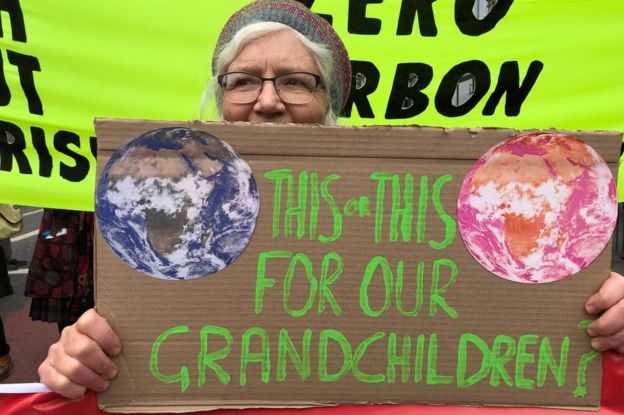 On Monday, Extinction Rebellion Scotland dropped banners over Victoria Street in Edinburgh, from the Finnieston Crane, and across Glasgow's City Chambers. No-one was arrested.

In London, however, protests caused widespread disruption on Monday, and campaigners have now been ordered to restrict their protests to Marble Arch.

The Metropolitan Police said 500,000 people had been affected by the diversion of bus routes. 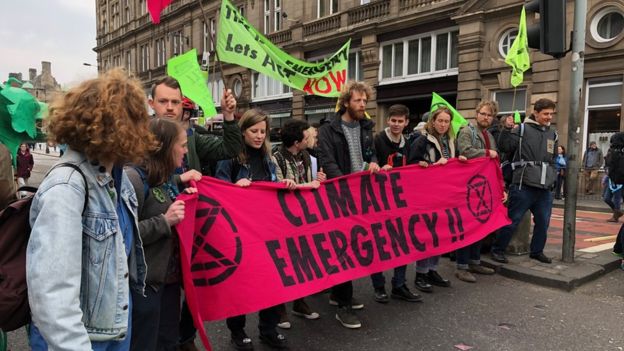 Four people also glued themselves together at the Labour leader's home.

The activists, who also used a bike lock to attach themselves to Mr Corbyn's north London house, said they supported him but wanted the Labour Party to go further than declaring a "climate emergency".

After ending their protest Tracee Williams, one of the group, said she did not think the action was a "misstep but whether we'd do it again, I'm not so sure".

Mr Corbyn left his home but declined to meet or speak to any of the protesters.

Easter eggs and flowers from the group, which had been taken into Mr Corbyn's home earlier, were later returned to the street by the Labour leader's wife Laura Alvarez.

Ms Williams added the group "really felt we had to bring it to his front door" but "feel absolutely terrible about upsetting his wife".

As of 17:00 BST, 340 people have been arrested since Monday over the protests, the Met Police said.

The campaigner who glued himself to a train window was removed about an hour after the start of the DLR protest, at about 10:50.

The man and a woman who unfurled a banner and glued themselves to the top of the train's carriage were also later removed and carried off by officers.

BTP said three people had been arrested for obstructing the railway.

Extinction Rebellion targeted the DLR after members changed their minds about disrupting the Tube network.

It came after BTP ordered Transport for London (TfL) to switch off wifi at Tube stations to deter protests.

Supt Matt Allingham said extra officers would be on duty throughout the day, adding: "We will not tolerate any activity which disrupts the millions of passengers who rely on using the rail network in London."

Campaigners at Waterloo Bridge, Parliament Square and Oxford Circus have been ordered to restrict their protests to Marble Arch.

The Met said protesters were being removed from both areas and those who did not comply would be arrested.