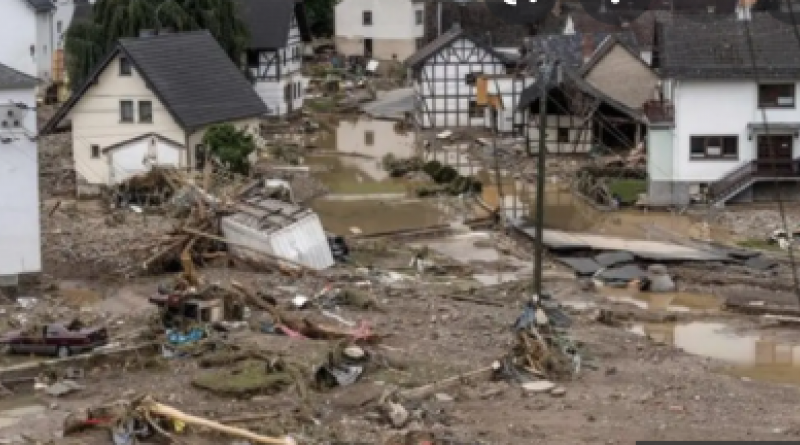 The new climate normal is frightening.

Climate scientists have warned for decades that emitting copious amounts of greenhouse gases into the atmosphere would make extreme weather, such as floods and heatwaves, more common. But even they, whose predictions have often been labeled ‘alarmist’, were surprised by the extent of the destruction caused by killer floods in Germany this week or the North American deadly heatwaves, where temperatures were close to a staggering 50°C.

Heavy rains in the Rhine basin on Wednesday smashed precipitation records, leading to devastating floods that killed at least 100 people and destroyed tens of thousands of homes.  Nearly 900 army personnel have joined rescue workers in Germany since about 1,300 people were still reported missing.

Rhineland-Palatinate and North Rhine-Westphalia were hit by nearly 150 liters of rain per square meter within just 48 hours — that’s almost double the amount of rain normally recorded in this part of Germany for the entire month of July. The cost of the damage is likely to run into “billions of euros,” says Gerd Landsberg, head of the German Association of Towns and Municipalities.

Germany isn’t alone. Heavy floods have engulfed much of western Europe. At least two dozen people have died so far in Belgium. Wallonia, Belgium’s largely French-speaking region, is among one of the worst-affected areas where more than 21,000 people are currently without electricity. 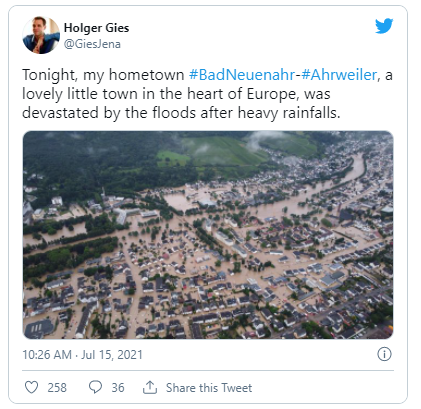 Belgian Prime Minister Alexander De Croo said these recent days of heavy flooding in Belgium were the worst the country has ever seen.

The Netherlands, Luxembourg, and Switzerland are also affected. On Thursday, the Dutch province of Limburg was officially designated as a disaster zone.

Links to climate change. But even scientists are surprised

“There is a clear link between extreme precipitation occurring and climate change,” Professor Wim Thiery of Brussels University told The Associated Press, referring to recent extreme weather from western US and Canada to Siberia. 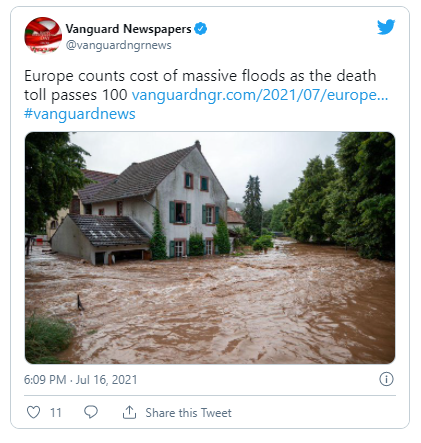 The link between man-made climate change and the North American heatwaves is the strongest out of all the devastating freak weather seen this month. “They would be virtually impossible without global warming,” said Professor Stefan Rahmstorf of the University of Potsdam.

Concerning the floods and storms in western Europe, scientists will need more time to assess the extent to which the record downpour is owed to greenhouse gas emissions due to human activity. However, the off-the-charts nature of these floods indicates that climate change is very likely involved.

“With climate change we do expect all hydro-meteorological extremes to become more extreme. What we have seen in Germany is broadly consistent with this trend,” said Carlo Buontempo, the director of the Copernicus Climate Change Service at the European Centre for Medium-Range Weather Forecasts.

Climate models have been predicting extreme weather events such as the floods in northern Europe and the US heatwaves for years. The huge damage to property and human death toll serves as yet another warning that we should take the climate emergency very seriously.

Although the results of these climate models have been largely ignored or even called ‘alarmist’, they may actually be too conservative. Speaking to BBC News, former Met Office chief scientist Prof Dame Julia Sling said that scientists need more funding to make more accurate projections in the future.

“(We need) an international centre to deliver the quantum leap to climate models that capture the fundamental physics that drive extremes,” Sling said. “Unless we do that we will continue to underestimate the intensity/frequency of extremes and the increasingly unprecedented nature of them.” 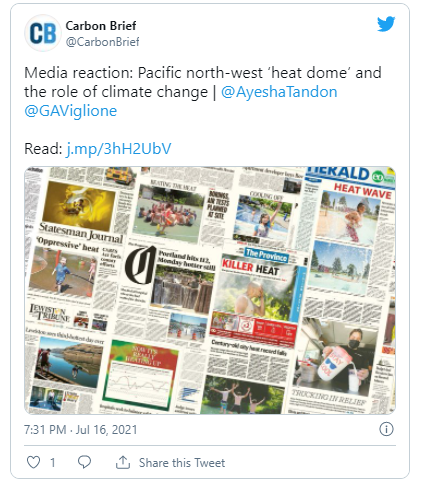 A 2019 study found that climate change will probably make extreme heat conditions and their health risks much more frequent in almost every part of the US. By 2050, hundreds of US cities could see around 30 days each year with heat index temperatures above 100 degrees Fahrenheit (37.7 Celsius), scientists said.

As previous records for extreme weather are broken on a yearly basis, it is becoming increasingly clear that we’re living through times of rapid climatic shifts. Last decade’s extreme weather may have just been the new normal for this decade. “Once-in-a-century” claims ought to be revised.

What will the next decade bring? Not good things, that’s for sure, unless we take urgent action to reduce greenhouse gas emissions. The world has already warmed by about 1.2C since the industrial era began and temperatures, and time is running out.