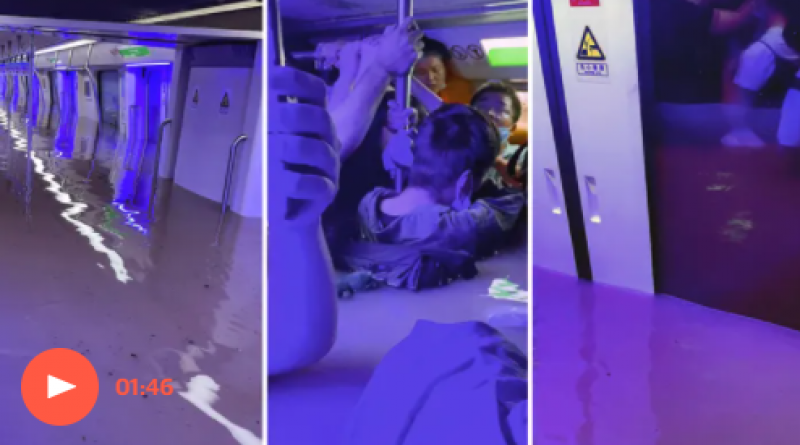 Days of torrential rain and massive flooding have hit China’s Henan province, bursting the banks of rivers, overwhelming dams and the public transport system and forcing thousands of people to evacuate their homes.

At least 25 people have been killed and seven are missing in the provincial capital, Zhengzhou. The provincial authorities issued its highest level of weather warning. A year’s worth of rain – 640mm – fell in just three days. The city’s weather bureau said more than 552mm of rain had fallen between 7pm on Monday and 7pm on Tuesday, including 202mm between 4pm and 5pm on Tuesday.

About 200,000 people have been moved to shelters, state media Xinhua reported on Wednesday, citing local government. The rainfall flooded the city’s subway system, collapsed roads, and prompted the suspension of inbound flights.

On Wednesday afternoon, officials raised the official death toll to 25 in Henan province. The figure is believed to include the 12 previously reported deaths in the capital and another four in the nearby city of Gongyi as 14 reservoirs overflowed, causing flooding and landslides. They said 1.2 million people had been affected by the floods.

The casualties are expected to rise as rescue work continues in the days to come. Chinese media call the rainfall “unseen in the last 1,000 years”. Some worry that given the scale of the damage, the post-disaster reconstruction will be particularly challenging for one of the most populous provinces in China.

Across social media, videos showed the severity of the flooding, with hundreds of cars floating down main streets, and crowds of people forming human chains to rescue each other from roads and flooded buildings. 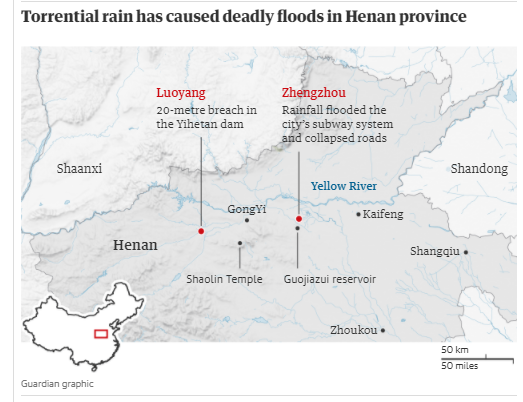 In the subway system, where at least 12 of the confirmed deaths are thought to have occurred, waist-high water gushed through the tunnels, submerging platforms and filling carriages. Other videos showed commuters trapped inside carriages holding on to handrails with water up to their chests. At least five bodies were visible in one clip, filmed at an unidentified Zhengzhou station.

“The water reached my chest,” a survivor wrote on social media. “I was really scared, but the most terrifying thing was not the water, but the diminishing air supply in the carriage.”

The death toll was expected to rise, with numerous social media posts by loved ones of people missing.

Zhengzhou’s flood control headquarters said water storage at the Guojiazui reservoir was at “major risk” of dam failure and the local government was ordering evacuations.

In the city of Luoyang, local authorities said the rainfall had caused a 20-metre breach in the Yihetan dam, which “could collapse at any time”. Early on Wednesday, a division of China’s military were sent out to the site to carry out emergency blasting and flood diversion.

Other divisions were sent out across the province to fight the floods and carry out rescues, authorities said.

From Saturday to Tuesday, 3,535 weather stations in Henan, one of China’s most populous provinces with 94 million people, reported rainfall exceeding 5cm. Among the stations 1,614 registered levels above 10cm and 151 above 25cm, the authorities said.

Footage on China’s social media showed the world-renowned Shaolin Temple, known for martial arts, as well as other cultural sites, badly affected. Hundreds of trapped residents in Henan called for help online as flooding cut electricity to their homes.

Floods are common in China’s rainy season, but their impact has worsened over the decades, due in part to China’s rapid urbanisation and the global climate crisis.

Extreme weather events have occurred in many parts of China this summer. Hundreds of thousands of residents in Sichuan province had to be relocated this month due to floods and landslides.

In June, Hotan city, in the far-west region of Xinjiang, had record-breaking rainfall, causing one resident to comment on social media that “the rainfall [this month] is equivalent to the combined rainfall of the past two years”.

Greenpeace said the risk of extreme weather was now highest in China in the densely populated city centres but that it was also growing fast for the outskirts of large cities because of rapid urbanisation.

Liu Junyan, of Greenpeace International, told Chinese media: “Because of the highly concentrated population, infrastructure and economic activity, the exposure and vulnerability of climate hazards are higher in urban areas. Cities are an important sector of global greenhouse gas emissions, which account for about 70% of the total emissions.”