The Danish climate minister closing down the oil industry for good. 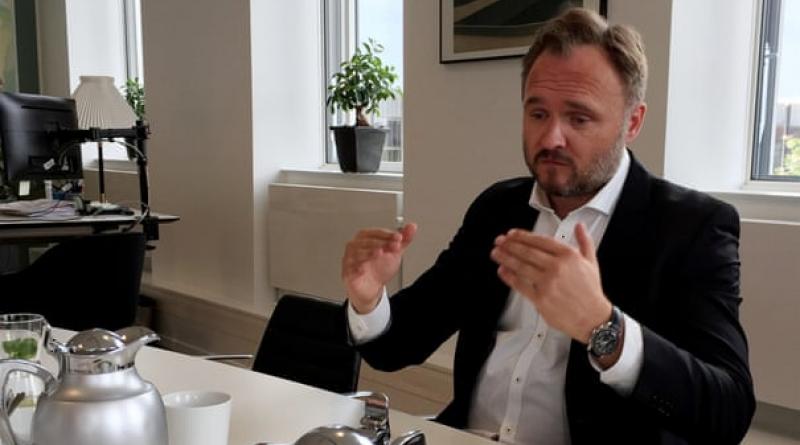 Dan Jørgensen has agreed the world’s most ambitious climate goal with a promise to cut 70% of emissions by 2030.

Denmark’s climate minister is fairly certain that the deal to close down the nation’s oil industry by 2050, announced on Friday morning, marks the biggest moment in his career.

“I think this is probably going to be the biggest decision that I’m a part of in my life,” Dan Jørgensen told the Guardian hours after the announcement.

“This obviously wasn’t an easy decision. We are the biggest oil producer in the EU. We have, since the 1970s, to a large extent financed our welfare state with oil money. So to say, ‘stop’, and to pay the cost for that, is a big deal for us.”

To call it the “biggest decision” is nonetheless significant for the man who for the past year has been the public face of what many argue is the world’s most ambitious climate goal, Denmark’s plan to cut emissions by 70% by 2030.

In recent months, Jørgensen and Denmark’s prime minister have come under criticism for over-reliance on technical solutions, such as two “energy islands”, which together will generate 5GW of wind energy, and foot-dragging on issues like green tax reform.

Jørgensen said he hoped Friday’s announcement would show his government’s green promises were sincere “I think there’s an English expression ‘put your money where your mouth is’, and that is basically that’s what we’re trying to do,” he said.

He said the centre-right opposition Liberal party also deserved credit for backing the cancellation of the current exploration licensing round, something it had long opposed.

“This is an example of what has changed in Danish politics, that we now really do have a broad support for the green transformation,” he said. “Political parties that a decade ago would have never even have thought about this are now on board.”

The deal is binding on all future governments.

“That’s important, of course, because when we then tell the world that we will do this, they can count on it, but also for the industry, because it gives them some stability and certainty,” Jørgensen pointed out.

“Obviously, the industry is not happy about the cutoff date. They’re not happy about us having cancelled the tenders. But on the other hand, I think they will be happy about knowing exactly what conditions they have. Because when we say 2050, then that also means we’re not going to change that to 2045 or 2040.”

Under the agreement, oil companies with existing licences in the Danish North Sea will be able to continue exploring for oil and gas in them.

“If we were to say to companies that already had the permissions, ‘we’re taking them away from you’, the price tag on that is one that no government would be able to bear,” he said.

“The costs would be so enormous that I doubt that we would be considered a frontrunner. People would just shake their heads and think we were stupid.”

Jørgensen claims his government’s existing actions have already brought Denmark a long way. “We need to reduce by 20 megatons between now and 2030, and we’ve already reduced by five. We have 10 years to do it, and in one and a half years, we’ve done a fourth of that,” he said.

Jørgensen has also been spending much of his time since his appointment last year on international outreach. Unfortunately, he said, some of the countries that looked likely to follow Denmark’s example had had their plans knocked off course by the coronavirus crisis.

“The pandemic has unfortunately put good developments to rest in some countries … I hope that this doesn’t mean that too many countries forget that we have another extreme and more long-lasting crisis, which is the climate crisis.”

He said it was crucial the world did not repeat the mistakes made after the financial crisis in 2008 and divert stimulus spending to “old-fashioned technologies”.

Jørgensen said he was not worried that US president-elect, Joe Biden, would be insufficiently radical.

“I have total confidence that the Biden administration will bring huge progress to the American transformation on the green agenda,” he said. “I’m just extremely pleased when I see such progressive forces being given the power, and I think all the signs that we’ve had from the president-elect and his team are pointing in the right direction.”

The four years of climate backsliding under Donald Trump, he said, should not be seen as fatal for efforts to keep global heating to an acceptable level.

“In a lot of the individual cities and states, there has been some progress that can be built on, so I don’t subscribe to the standpoint that there has been irreversible damage,” he said. “Now, when the US are re-entering, I’d say that it can give us a new momentum.”

With Friday’s announcement, Denmark has gained the moral power to punch above its weight. “In most countries, politicians will often say ‘This is a historic decision’. Sometimes it’s true, other times it’s not. With this one, we don’t even have to say it ourselves.”

Coal plants ‘uneconomical in most regions’.