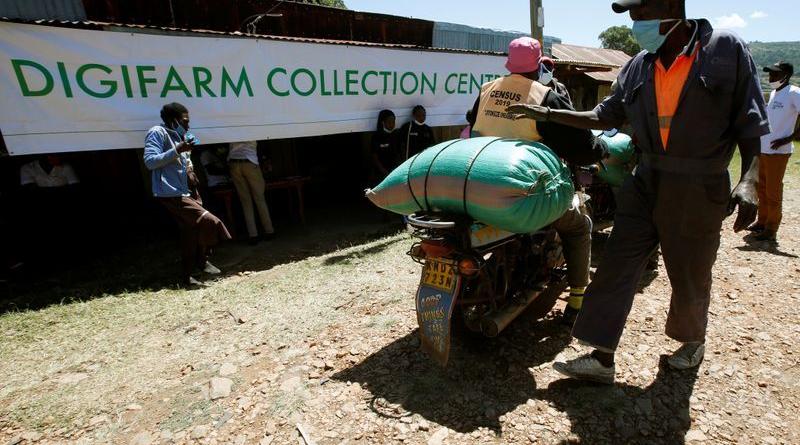 BOMET, Kenya, June 15 (Reuters) - Rachel Bor's neighbours chatted, laughed and shared milky tea from her tarnished kettle as they celebrated their most bountiful maize crop yet on her half-acre plot in Kenya's Rift Valley.

The secret behind the successful harvest was the credit they received to buy better quality seeds, fertiliser and pesticides after enrolling on the Digifarm mobile phone platform, the latest innovation by the region's biggest telecoms operator, Safaricom.

"Since Digifarm came to our area we have been happy. We had not been able to harvest any maize for six years," said Mercy Rono as she yanked a ripe corn cob from its golden yellow stem.

Safaricom, part-owned by South Africa's Vodacom and Britain's Vodafone, is under pressure to create new revenue streams as its voice business matures.

After a successful two-year pilot, during which it registered 1 million farmers of which 42,000 are active, it is on a hiring spree and seeking new logistics partners.

Safaricom's internal projections anticipate earnings of between 25-250 billion shillings annually ($235 million-$2.35 billion) within five years from the platform, a company source said, representing up to 10% of annual agricultural transactions in the country.

Its biggest challenge is likely to be fragmented nature of the market, said Professor Jane Ambuko at the University of Nairobi's college of agriculture. Firms like Digifarm must figure out how to reliably gather commodities from small farms to be sold in bulk.

"The food supply chain is very inefficient. Until we can streamline the supply chain... it is a hard nut to crack," she said.

Although agri-tech has been constrained by lower mobile data availability in the countryside, the market is huge.

Agriculture employs more than a quarter of the global workforce and is the biggest employer in almost all the world's poorer nations, where farmers regularly deal with poor-quality seeds, price-fixing cartels and climate disasters.

A European Union-funded study last year estimated the African agri-tech market to be worth $2.6 billion annually, and Digifarm is not the only newcomer. In Kenya, where farming accounts for a third of annual economic output and more than half of the workforce, tech start-up Twiga also connects farmers with bulk purchases and has raised $55 million in three years from global investors like Goldman Sachs. Meanwhile, the market in Nigeria is crowded with startups like Farmcrowdy and Thrive Agric.

Digifarm farmers receive 10,500 shillings of credit per acre of maize, which they repay with 15% interest once the crop is sold. Once the maize is collected, Digifarm arranges a buyer who pays 33.3 shillings per kg of maize - 3.3 shillings more than traditional brokers.

Wilson Kibet, a 50-year old farmer in Bomet, harvested 30 bags of maize from his farm after partnering with Digifarm, up from just one bag or less in previous seasons.

Farmers in the area said they could not afford to buy quality seeds and other supplies before Digifarm unlocked financing. Training has also made a huge difference.

"I...followed all the training lessons," Kibet said, standing outside a Digifarm maize collection centre, where farmers brought sacks of maize on donkeys and motor-bikes. "They even told us not to plant beans in the middle of maize rows."

The role of solar PV and energy storage in farming.