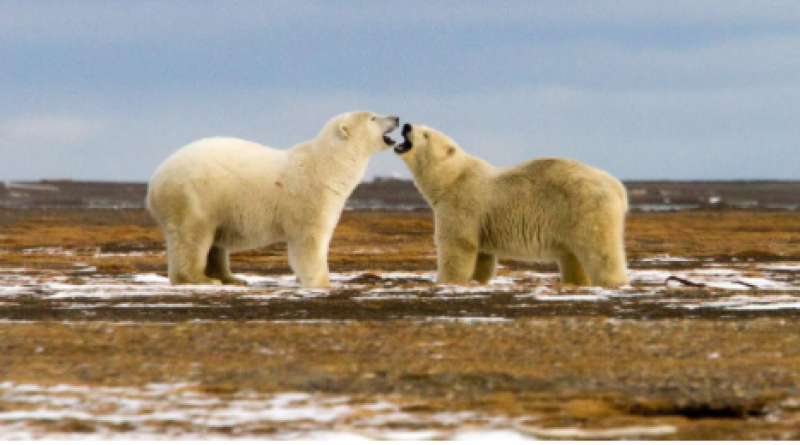 Climate action advocates and wildlife defenders celebrated Monday after the U.S. Court of Appeals for the 9th Circuit rejected the Trump administration's approval of Liberty, a proposed offshore oil-drilling project in federal Arctic waters that opponents warned would endanger local communities, animals, and the environment.

"This is a huge victory for polar bears and our climate," declared Kristen Monsell, oceans legal director at the Center for Biological Diversity, in a statement. "This project was a disaster waiting to happen that should never have been approved. I'm thrilled the court saw through the Trump administration's attempt to push this project through without carefully studying its risks."

Marcie Keever, legal director at Friends of the Earth, similarly applauded the ruling, saying that "thankfully, the court put the health of our children and our planet over oil company profits."

Both groups joined with fellow advocacy organizations Defenders of Wildlife, Greenpeace, and Pacific Environment for a lawsuit challenging the Hilcorp Alaska project, which was approved in 2018. The energy company planned to construct an artificial island, wells, and a pipeline along the Alaska coast in the Beaufort Sea. 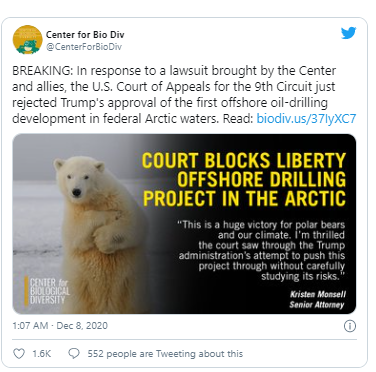 Jeremy Lieb, an attorney at the nonprofit law organization Earthjustice, which represented the advocacy groups, praised the court for rejecting the administration's "inaccurate and misleading analysis of this project's impact to the climate." The court determined that the administration hadn't properly considered Liberty's climate impacts as required by the National Environmental Policy Act, specifically taking issue with an economic model claiming the project would benefit the climate.

"In the face of a worsening climate crisis, the federal government should not be in the business of approving irresponsible offshore oil development in the Arctic," Lieb said. "The world cannot afford to develop new oil prospects anywhere, but especially in the Arctic where warming is already taking such a significant toll."

Research has shown that the Arctic is warming faster than the rest of the world, which has devastating effects on its human and animal inhabitants — including caribou, polar bears, reindeer, and walruses — and the planet more broadly. As one expert put it last year: "What happens in the Arctic does not stay in the Arctic."

Calling the court ruling "a victory for the planet and its people," Greenpeace senior research specialist Tim Donaghy said that it "affirms that the U.S. must take steps to transition off of oil and gas if we are to have any hope of halting the climate crisis."

"If we are going to create a just, green, and peaceful future, it must start with rejecting destructive projects like Liberty," he explained, before referencing President-elect Joe Biden's win over President Donald Trump. Ahead of the November election, climate advocates had rallied around Biden while pushing him to embrace bolder policies.

"Climate action must happen now and the Biden administration needs to keep its promise to halt any new oil and gas leasing on federal lands and waters," Donaghy said. 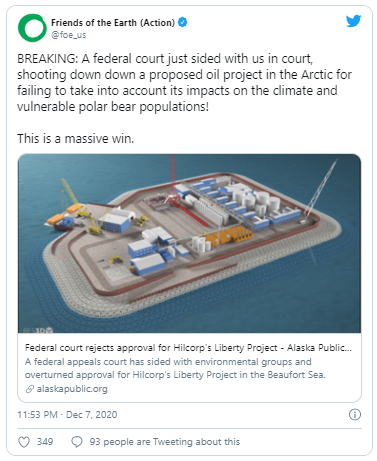 In addition to the climate finding, the court also determined that the U.S. Fish and Wildlife Service failed to sufficiently analyze Liberty's impact on polar bears, in violation of the Endangered Species Act — a decision that was welcomed by Nicole Whittington-Evans, Alaska program director at Defenders of Wildlife.

"Today's news is a victory for Alaska's imperiled polar bears that are threatened by oil and gas development throughout virtually all of their terrestrial denning critical habitat — in the Arctic National Wildlife Refuge, National Petroleum Reserve-Alaska, and in the nearshore marine environment as well," she said, vowing to "continue our fight against destructive oil and gas drilling and for the survival of polar bears in the Arctic."

Despite the win for the region's polar bears in terms of offshore drilling, the animals are still threatened by the Trump administration's ongoing effort to open up the Arctic National Wildlife Refuge to oil and gas extraction — despite opposition from local Indigenous people as well as environmentalists.

The administration on Monday proposed an "incidental harassment authorization" that would allow energy companies to disrupt polar bears while looking for oil and gas deposits. According to Reuters:

The Fish and Wildlife Service said that no polar bears are expected to be injured or killed during seismic operations, some of which are scheduled to take place next month, and expects disturbances to impact only a few bears.
But several veteran Arctic scientists and environmentalists in Alaska have warned against seismic operations — which can involve blasting to produce sonic images of underground formations. They argue the testing will upset wildlife and that the heavy machinery and activity involved in the work will damage tundra and speed up the thaw of permafrost.

As Monsell concluded: "The Trump administration seems determined to push polar bears further down the path to extinction before leaving office."