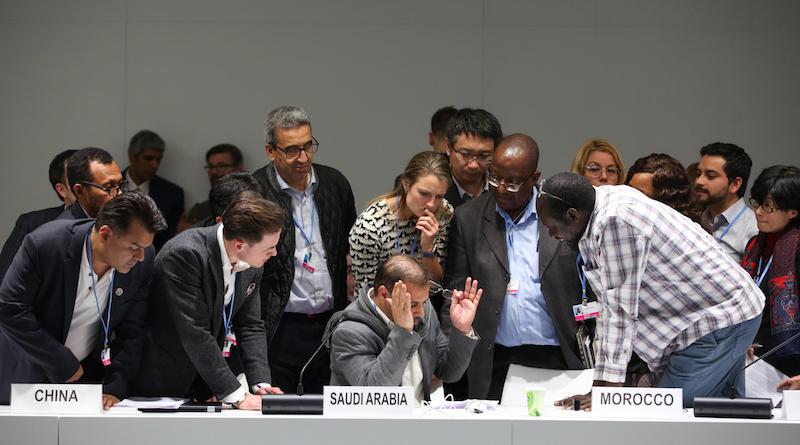 The failure of the Paris Agreement to directly address the production of fossil fuels is seen by many as a fatal flaw.

Planned extraction of coal, oil and gas is already enough to blow past the 1.5C target. And it is the big producers - US, Australia, Saudi Arabia, Brazil, Russia and others - who consistently work to undermine even the demand-side restrictions the Paris deal encourages. On Tuesday, one EU lawmaker accused some of these nations of holding up progress at Cop25.

But the winds are changing and an increasing number of countries are prepared to talk openly of phasing out their fossil fuel sectors.

There are spaces in the UN climate process for these governments to show their leadership, according to a joint op-ed today by researchers from the UN Environment Programme and Stockholm Environment Institute.

If those countries are willing, they could build a proper global conversation about ending extraction of coal, oil and gas.

*** From We Mean Business: Companies announce plans to align with a 1.5C future

177 companies have pledged to set science-based targets aligned with limiting global temperature rise to 1.5C and reaching net-zero emissions by 2050. The number of corporate signatories has more than doubled since the last announcement at the UN Climate Action Summit in September. View the press release here or contact kristen@wemeanbusinesscoalition.org to learn more.***

Get in touch. Tweet us at @chloefarand and @karlmathiesen. Or email cf@climatehomenews.com or km@climatehomenews.com. And please help CHN by sharing our articles. If you want to share this newsletter it will be posted on the CHN website later each morning.

The US wants to ensure that it can never be held accountable for loss and damage caused by climate impacts in vulnerable countries - despite being responsible for almost a third of the gases now heating the planet. Read our story here.

The US position, which CHN understands hasn’t been formally submitted to the UN, would extend the existing waiver on liability and compensation in the Paris Agreement to any UNFCCC decision.

It would also allow parties to the UN convention but not part of the Paris deal - as of next year this will describe just one country - to sit on the governing committee for discussion of 'loss and damage'. Developing countries are not happy.

The high-level segment of Cop25 officially opened on Tuesday morning as negotiators passed on the baton to their ministers. They have four day to finalise the Paris Agreement rules or risk pushing a decision into next year.

Head of UN Climate Change Patricia Espinosa urged diplomats to come to an agreement on the last unresolved issue of the Paris rulebook, carbon markets. (Catch up with our explainer here).

Failure to set-up a new global carbon market would “send a negative message that can undermine our overall climate efforts,” she warned. “My message to you is this: We need your decisions. We need your leadership. We are out of time.”

The Chilean presidency has assigned six ministers to try and move discussions forward. New Zealand and South Africa will try to unlock negotiations on carbon market, Grenada and Norway have taken on loss and damage and Spain and Singapore are coordinating talks on Cop25’s final decision text.

Cop25 president Carolina Schmidt warned negotiators the talks “must mark a real change of direction in our ambition”.

The final language of the Cop25 decision will reflect the meeting’s political message on ambition and will be used as a test for its’ success. This is one to watch closely.

One of the giants of climate diplomacy will not be there. For the first time in over a decade, China's retired special representative Xie Zhenhua will not lead his country's delegation. Li Jing, writing for chinadialogue, looks back at a career that may eventually be considered the most influential in climate diplomacy. She also assesses the position and background of his successor: vice minister Zhao Yingmin.

Elsewhere at Cop25… “We can’t promise you sunshine, but we can promise you a warm welcome,” said designated Cop26 president Claire O’Neill during a high-level event on Tuesday.

O’Neill said next year’s climate talks in Glasgow, Scotland, were a critical moment when countries are expected to enhance their climate plans.

“It’s a tall order,” she said. “We know we can do it together. We have to do this, this isn’t an option. There is no planet B.”

Hilda Nakabyue, a youth climate striker from Uganda, directly appealed to O’Neill to leverage action. “Please Madame Claire, I need all of your help. I want you to join the youth to put pressure on our governments,” she said.

Meanwhile, Americans still committed to climate action continue to make themselves heard in the negotiation halls.

Michael Bloomberg, who resigned as UN special envoy for climate action to enter the Democratic presidential race in the US, arrived at Cop25 on Tuesday. “I’m here because the White House isn’t,” he said, before handing the latest report from America’s Pledge to Espinosa.

He shared a stage with Mark Carney, his replacement as a UN special envoy and the outgoing governor of the Bank of England, and Han Solo actor Harrison Ford. CHN also spotted former US secretary of state John Kerry in the Cop25 corridors.

The UN agenda for Wednesday is here.

What to watch out for on Wednesday… It’s the day of ambition at Cop25. The Chilean presidency is organising a pre-2020 stocktake for countries to consider their efforts in addressing climate change before next year. The event is due to be led by a panel of ministers and followed by an open discussion in plenary.

The afternoon will be dedicated to the scale-up of ambition of ‘non-state actors’. Cop25 president Carolina Schmidt, UN secretary general António Guterres and former Irish president Mary Robinson are expected to speak.

The EU Commission’s green deal for Europe is due to be unveiled in Brussels today. The plan is expected to set a timeline for the commission’s plans to increase the bloc’s 2030 target and 2050 net zero emissions target.

The EU Parliament is due to debate the plans with commission president Ursula Von der Leyen and executive vice-president Frans Timmermans from 2pm. Tune in here.

That's it from us. Have a great day.