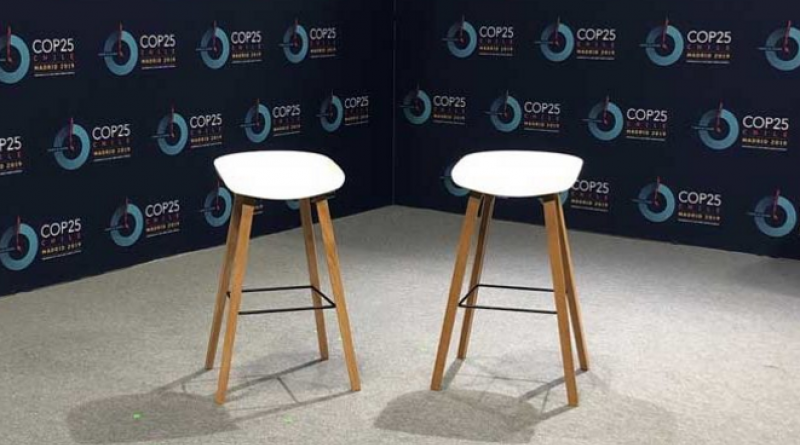 MADRID, Spain – The leaders of the world’s 20 largest economies appeared to agree on one thing at the 25th annual United Nations climate summit (COP25) here in Spain’s capital. They would definitely not heed the call of the world’s youth who protested relentlessly, led by 16-year-old Swedish activist Greta Thunberg, demanding a future for themselves and the planet.

In what observers are calling a stunning failure of the UN climate process, those leaders would also not agree to up their Paris Agreement carbon-reduction pledges. They would not commit the billions they promised to poor nations struggling with escalating heat, drought and deluge. They would not consider human rights a moral duty as they maneuvered to devise carbon markets enriching themselves and corporations.

And they would do virtually nothing to curb earth-heating emissions — while stonewalling against all efforts to close carbon accounting loopholes that will make the planet even hotter.

It was the longest-ever COP, or Conference of the Parties, with nature signaling herclimate-changed wrath in every corner of the globe. But those with the power to act chose — after two weeks of tortured, fruitless negotiations — to do next to nothing, while the world burns.

“How long will you keep negotiating?” an angry Hilda Flavia Nakabuye, a 22-year-old activist from Uganda traveling with Thunberg, scolded ministers last week. “You’ve been negotiating for the last 25 years, even before I was born. Do you want Africa to perish before you act? Please listen: if you don’t know how to fix it, stop breaking it.”

Expectations were already low heading into COP25. But with Brazil, Australia, Saudi Arabia and the United States throwing bombs, little came of the conference aside from a few technical items to complete a mixed results Paris rulebook. For what it’s worth, the Paris Agreement will go into force in 2020, even as the United States, the world’s second biggest carbon polluter, becomes the only nation to exit the global accord.

Little to trust at COP25 on action items

The list of blocked and failed COP25 initiatives is both long and demoralizing:

How did we get here?

Some veteran climate summit attendees view COP25 as a cynical continuance of a quarter-century of past performance, with rich industrial nations ignoring the realities of rapidly surging global heating they’ve largely caused, while feigning good faith in a corrupt process.

But that overlooks an important historical fact — the aggressive leadership of U.S. President Barack Obama during his last two years in office, when his re-election was no longer an issue. Obama bewildered environmentalists by promoting renewable energy and better vehicle fuel-economy standards, while allowing more fracking and oil exploration. Still, many analysts agree he craved an environmental legacy and saw the pathway to Paris as the answer.

At COP20 in Lima, Peru, in 2014, Obama and U.S. Secretary of State John Kerry achieved a breakthrough, persuading China to support a voluntary global emissions reduction plan to be signed in Paris at COP21 in 2015. China, long a resister, agreed. The rest of the world fell in line and the Paris Agreement was drafted in Lima.

U.S. leadership under Obama was greatly enhanced by two towering figures in international climate policy — UN General Secretary Ban Ki-moon of South Korea and Christina Figueres of Costa Rica, the executive secretary of the UN Framework Committee on Climate Change (UNFCCC). Together, these respected leaders wielded the clout needed to push past laggards and to force G20 delegates to listen to the grievances of vulnerable nations at Paris.

One example of their contribution: the initial Paris goal was to hold global temperature rise to 2 degrees Celsius (3.6 degrees Fahrenheit) by 2100 over a 1900 baseline (temperatures have risen 1oC (1.8oF since 1900). But low-lying Pacific nations argued that 2 degrees would wipe them off the map; the goal must be 1.5 degrees or they would not sign. Pushed by Ban and Figueres, the U.S. reluctantly agreed; China and other industrialized nations came onboard.

COP21 and the Paris Agreement, though relying on voluntary compliance and international cooperation, was supposed to be a starting point toward meaningful emission reductions; but it turned out to be a high-water mark in climate negotiations. Whatever hope it created was dashed 11 months later when Donald Trump was elected U.S. president in November 2016, just as COP22 was starting in Marrakesh, Morocco. Negotiators there were stunned.

From the first, the question in Marrakesh became: who will step up to lead in the fulfillment of Paris? At the same time, Ban and Figueres were stepping down; successors Antonio Guterres of Portugal and Patricia Espinosa of Mexico have not been nearly as influential or effective since taking over.

The leadership answer was fully revealed in Madrid. It was not to be China, the world’s largest carbon polluter. Nor was it the EU, which is pre-occupied with Brexit, an increasingly climate-driven immigration crisis and the rise of nationalism.

Brazil, Australia and Saudi Arabia stepped into the vacuum instead, not to carry the spirit or framework of Paris forward, but each with a strong economic interest to undermine the global accord. At COP25, their delegates stood firm against overwhelming climate science evidence, disregarded the climate impacts each is feeling at home, and stayed deaf to the resounding pleas of a global youth movement led by Thunberg.

Emboldened by the negative U.S. influence under Trump, these nations showed no interest in acknowledging the existential threat to life on earth posed by their actions.

Unless US leadership reemerges after the presidential election next November, none of this bodes well for COP26 in Scotland and the final negotiations that will launch the Paris Agreement in 2020 — potentially sealing the fate of humanity and the planet.

Justin Catanoso, a professor of journalism at Wake Forest University in North Carolina, covers climate change and climate policy for Mongabay; this was his sixth UN climate summit. Follow him on Twitter @jcatanoso

Banner image caption: Two empty chairs on the set of a COP25 broadcast outlet seemed to symbolize the failing ambition and lack of integrity on display at the Madrid summit. Image by Justin Catanoso.

FEEDBACK: Use this form to send a message to the author of this post. If you want to post a public comment, you can do that at the bottom of the page.