“COP25 Must Change the Course of Climate Action and Ambition” 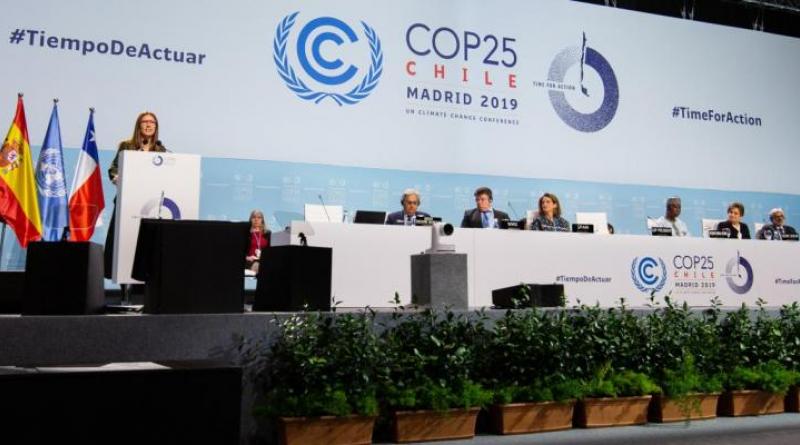 The High-Level Segment of the UN Climate Change Conference COP25 (to 13 December) kicked off today, with urgent reminders that the international community is running out of time to effectively tackle the climate crisis and must change course and step up ambition in order to prevent the worst climate impacts.

Speaking at the opening, Petteri Taalas, Secretary-General of the World Meteorological Organization (WMO), pointed out that his organization had published two climate statements this year, for the UN Climate Action Summit in September in New York and the Provisional Statement on the State of the Climate in 2019 - and that they are not good news.

“Global warming continues. The average global temperature has risen by about 1.1°C since the pre-industrial era and the ocean ocean has warmed by half a degree. 220 million people suffered from heatwaves last year. We have started seeing growth in hunger once again. Now we have more than 800 million people suffering from lack of food,” he said.

COP25 President and Chile’s Environment Minister Carolina Schmidt warned that droughts, fires and floods are hitting the people in her region, Latin America and the Caribbean, with the most vulnerable being the hardest hit.

“This conference must change the course of action.  A change of course in ambition by bringing new actors to the table: Regional, local and city governments and the sector both productive and financial. Because action is not and should not be just a political issue. National commitments are necessary but not sufficient. No one can be left out,” she said.

She pointed out that the Chilean COP Presidency had for the first time brought on board not just environment ministers, but ministers of agriculture, science, energy and not least finance who “hold the purse strings” for climate action.

Carolina Schmidt spoke of the social dimension of climate change, and the importance of involving all sectors of society – a sentiment shared by Teresa Ribera, Spain’s Minister for Ecological Transition who said that it was “amazing and moving” that there had been such a social outcry about climate change.

Patricia Espinosa, Executive Secretary of UN Climate Change (UNFCCC), made a passionate appeal to Ministers to make progress during the last remaining days of the COP:

“On both a professional and personal level, my message to you is this: We need your decisions. We need your leadership. We are out of time.”

The UN’s top climate change official also said she was optimistic that progress could be made, given that the Paris Agreement remained an “unprecedented multilateral success story,” with the bulk of the operationalizing guidelines already agreed.  “Because of your work, the cornerstones of the Paris Agreement are in place and fully functioning," she said.

Whilst there are many facets of climate action, and progress needs to be made on finance, technology and capacity building, one key topic that needs to be resolved at COP25 and is crucial to raise climate ambition is the use of carbon markets in order to tackle climate change.

“We recognize that a lot of technical work on this issue will remain for the future… but an agreement here in Madrid is crucial. We’ve made progress in the last few days, but we need to push on and finalize our work,” she said.

Article 6 is the only part of the Paris Agreement that directly engages with the private sector, helping them contribute to climate action and, ultimately, to the implementation of NDCs,” she added.

NDCs are “Nationally Determined Contributions” - national climate action plans under the Paris Agreement. By COP26 next year, new and updated NDCs will be submitted.

“2020 is only a few weeks away—the year when we must see more climate ambition reflected in new and revised NDCs. Without them, our window of opportunity closes,” Patricia Espinosa concluded.

Tijjani Muhammad-Bande, President of the UN General Assembly, pointed out that global greenhouse gas emissions need to peak fast, and that solutions to climate change exist. “But any delay will come at a high cost," he warned.

Mr. Bande said that many countries demonstrated leadership at the Climate Action Summit convened by the UN Secretary-General in September by making commitments to scale up their national climate action plans by 2020 and achieve carbon neutrality by mid-century.

“I encourage all other Member States to emulate them in order to ensure a better world for all,” he said.

Also at the opening of the High-Level Segment of COP25 was famous Spanish singer Alejandro Sanz, who pointed out that everyone can and must take action at an individual level.

“Sometimes, my melody dreams of your joy; sometimes, the planet dreams of our love. Allow me these two verses when I speak of our Mother Earth that we must embrace. We must give the best we have in our hearts, the best of ourselves as a species. I don’t want to tell anyone what to do, but I’m just going to tell you what I’m going to do.”

"We are all guilty and we are all part of the solution (...) At my concerts, I will reduce my carbon footprint as far as possible. And I will offset unavoidable pollution. Individual actions make a difference," he said.

The speeches and statements made at the opening of the High-Level Segment, as provided, can be found here.