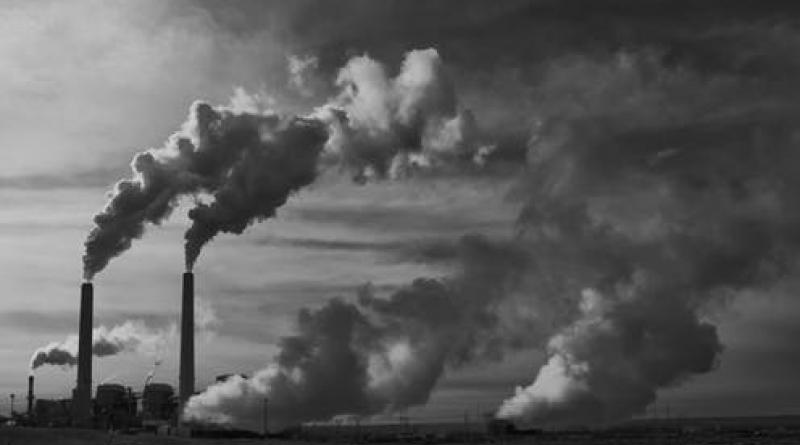 Bloomberg just published another stark reminder of the shifting landscape for energy generation – fossil fuels have a limited time as viable sources of energy. And I’m not talking about saving the planet or carbon taxes, simply economics. 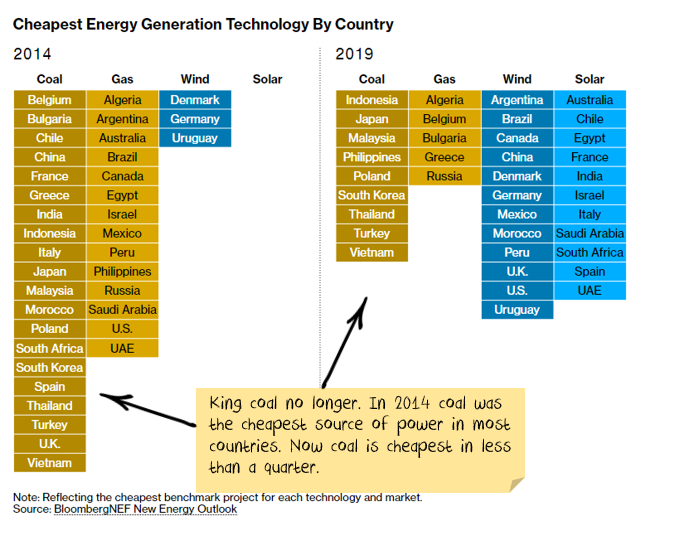 Coal, gas, oil, all have economics based on a scarcity curve: the more we use, the deeper we need to dig and more expensive to extract. Solar and battery power is on a technology curve: the more the world produces, the cheaper it becomes.

My view is we will reach an energy parity where technology curve becomes an upper bound for the scarcity curve. i.e. the price of energy won’t exceed the cost of Solar+Batteries.
Solar+Batteries are the “killer app” – extremely scalable once they reach an acceptable cost. The trillion-dollar question: what is that price? If it can be reached in 5 years, then there are significant implications for stocks right now. If it is 20 years, then investors can relax.

All the current trends point to energy parity being sooner rather than later for electricity. Oil has different issues – backup generation is being disrupted right now, cars will take longer, I’ll deal with oil another day.

There are a few big-picture numbers that you should be aware of. All figures are USD/kWh for international comparability. We use levelized cost of energy, which adjusts for the up-front cost of building power plants or solar arrays, asset life and tax issues. This means the numbers rely on a lot of assumptions, vary by country and region, and should be treated as approximate. In general, the numbers are for new installations with recent technology.

There are also continuing demographic shifts in investor attitudes: 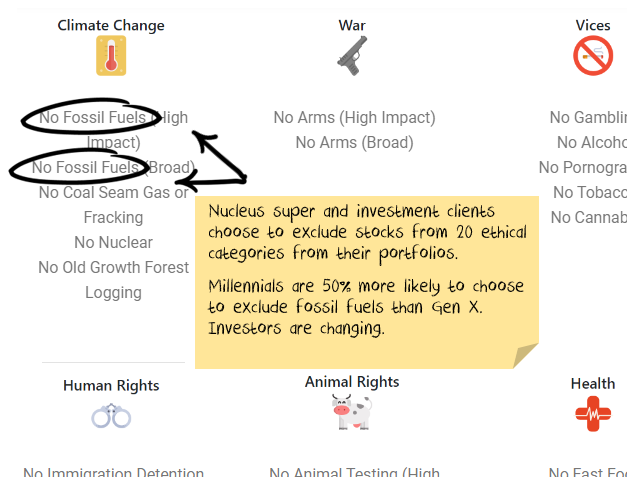 However you measure it, the cost of solar has fallen dramatically relative to other energy sources: 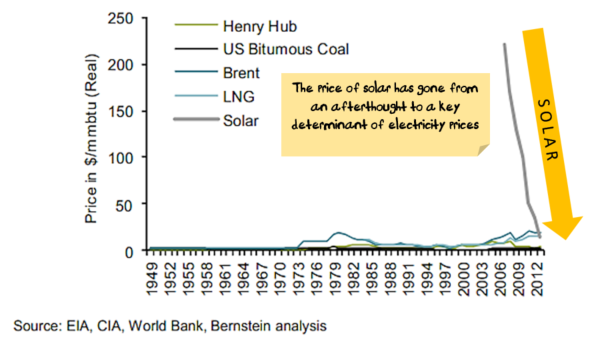 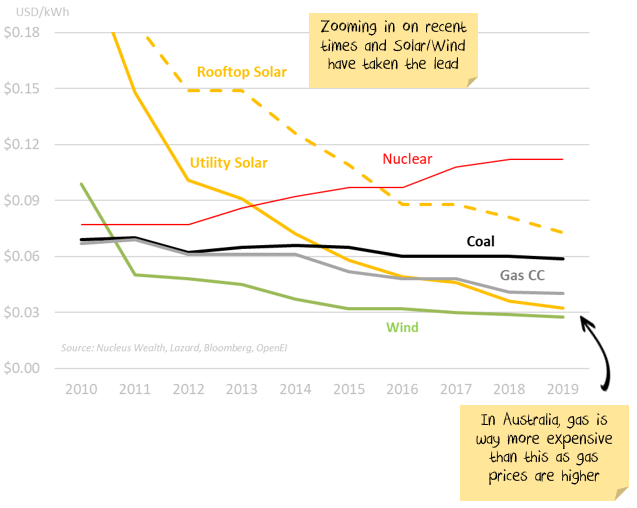 This graph way oversimplifies the issue, and there is a giant asterisk on solar and wind costs in that solar only supplies power during the day, and wind power is intermittent. What they need is something to store the energy, and fortunately, batteries are on the same type of price curve: 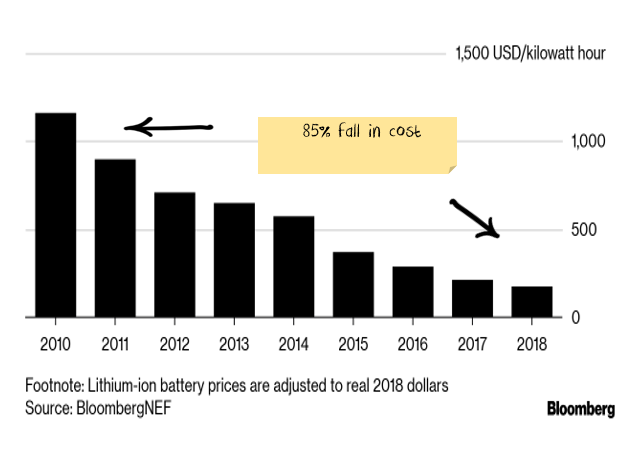 This is greatly aided by the fact that a few billion people want a longer battery life for a device they carry with them everywhere and stare at constantly. So, the best minds that money can buy are pretty focused on the task. Battery prices will continue to fall.

There are other battery options other than the Lithium-Ion batteries shown above. I have focussed on Lithium-Ion, but there may be another technology that supersedes it.

Putting batteries together with the solar gives us two options:

There is a range of different outcomes we could see for electricity prices.

Below I have focused on two different scenarios, one where solar+battery costs fall at 10% per year for the next five years, another at 20%.

In the last ten years, costs have fallen around 20% per year. Given how low solar costs are, the critical assumption is battery prices. A 20% fall in battery prices will have a much larger impact than a 20% fall in the cost of solar.

Either way, there is very little scope for coal prices to rise. If the 10% per annum cost savings are achieved then there will be no new fossil fuel power plants in even moderately sunny climates.

If 20% per annum cost savings are achieved, existing coal-fired plants with lots of remaining life will start shutting down.

Now 20% per annum cost savings compounded for 5 years is a tall order. But:

which means that 20% is not out of the question.

I have deliberately left Rooftop Solar out of the above tables, as rooftop solar is less comparable than you would think. Roof-top solar has costs of around $0.13 which is much higher than the costs above.

But that is not important. Rooftop solar is not competing with a coal plant, or even with utility solar.

Rooftop solar is competing with grid power + grid infrastructure. It is an important distinction.

I don’t care whether my rooftop solar produces cheaper than the local coal-fired power station, I care whether it produces at a cheaper rate than I pay for power – and it does:

The issue is my panels provide power during the day when everyone else’s panels are also producing electricity. So, unless I use it myself to offset the above charge, I get paid a fraction of what the power company will charge my neighbour for using my spare electricity. Also, the peak rate (in the evening) for time-of-day pricing is much higher than during the day.

At $0.31 for partial shifting, (i.e. generating enough power to get you through the evening peak), having some batteries is profitable in the right climate, but the return is low.

The big assumption is the discount rate. If you are prepared to accept a lower return (and lock in electricity prices), then partial shifting can be worth it at current prices.

But batteries aren’t yet a “no brainer” cheaper option. 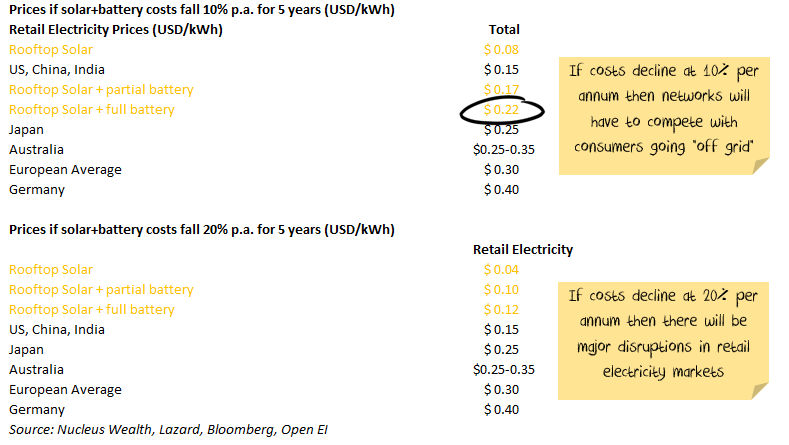 There are lots of questions that the above table raises. If everyone starts going off-grid, who pays for the poles and wires? Do we end up in a “death spiral” where more people leave the grid, raising the cost for those who remain, which means more people leave and so on?

My best bet is that it is going to be a battle of vested interests. Wealthier people will leave the grid when it becomes economic as they can afford the upfront cost. This leaves renters and the poor left paying higher bills to account for the transmission assets. Governments will have three options:

While option 1 would be my preferred choice, I have a sinking feeling that option 3 will be the path of least resistance. The lobbyists will no doubt be hard at work on option 2 in case any government have the fortitude to explore option 1.

The main issue is solar produces an excess of power during the day and a shortage at night.

Solar energy has a lower marginal cost (almost zero marginal cost) than gas or coal, and so the “duck curve” (see below) will only get worse: 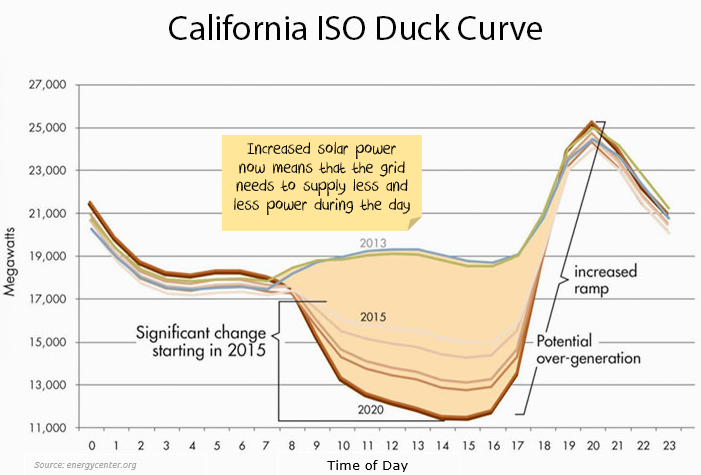 I expect this to be a permanent feature of the system going forward. i.e. electricity prices during the day to be much lower than evening prices.

The below chart from the IEA has lots of problems, it understates the effect of renewables by showing annual potential for renewables vs total potential for non-renewables. Then it offsets that error in the other direction by grossly overstating solar.

However, the thrust is principally right: solar is a massive, mostly untapped, source of energy. 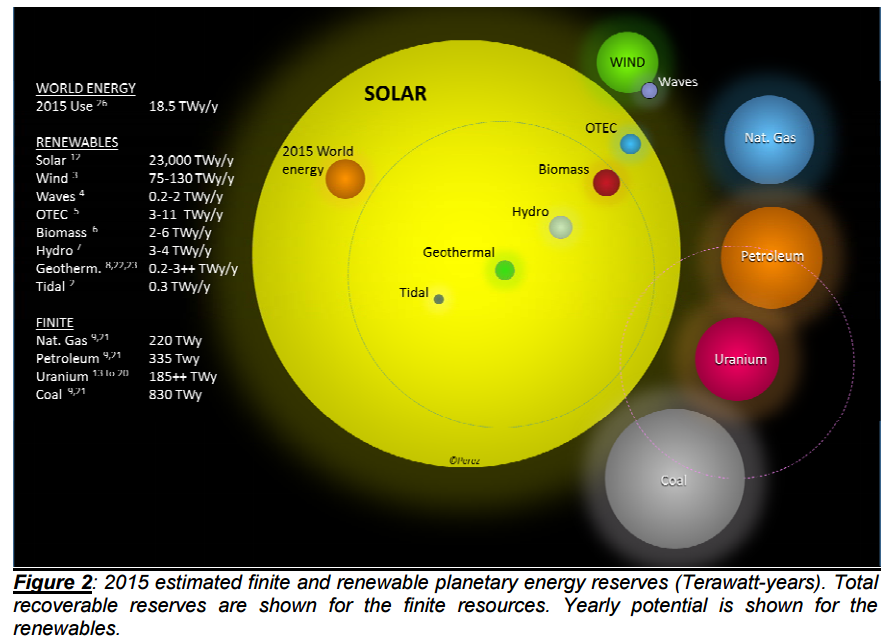 Maybe there will be an alternative technology breakthrough which drives electricity prices lower more quickly. I’m not saying it isn’t possible. However, for investors, the main game is solar – colossal potential and a history of steep cost reductions.

My take is that other renewable technologies will contribute to lower prices at the margin, but solar is the main issue for electricity costs.

Picking solar winners will be difficult

It is hard to pick solar winners – there are so many competing technologies that are improving, all with different economics: 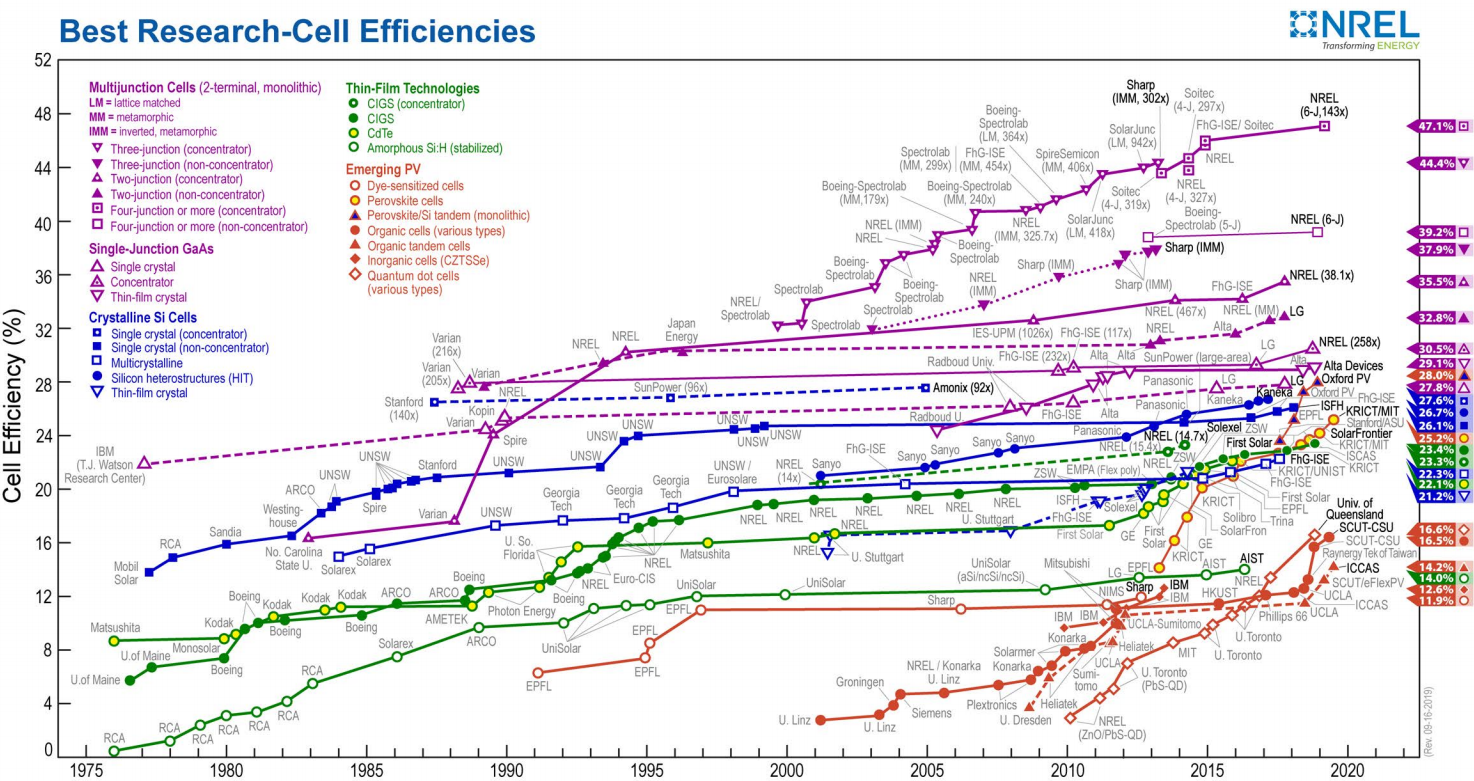 Keep in mind this chart is a comparison of conversion efficiency – not of economics. A 20% efficient (low cost) thin-film technology that can be painted onto structures might be much cheaper per kW than a 48% multijunction cell.

The net effect is you can try to invest in a manufacturer, but for all you know the technology will be superseded.

It matters whether you are in a sunny location or not.

Cities like L.A., Sydney, New Dehli will find solar costs 20% cheaper than somewhere like New York, Beijing, Tokyo as they simply get more sun. At the other end of the spectrum, London or Moscow get about half the solar resources of L.A. or Sydney:

You will also note from the above chart that solar resources are pretty good in most emerging countries – which is where most of the growth in demand is coming from.

At the moment, it looks like less than 5 years until we see significant changes in the electricity market, even if the rate of cost reductions halves. And don’t sleep on rooftop solar + batteries – they are a lot more expensive than coal, but retail power prices are a lot more expensive than wholesale. There is a decent chance rooftop solar + battery users going off-grid start a “death spiral” for electricity transmission.

Battery costs are the primary determinant at this point – if the rate of improvement slows significantly, then it may take 10 years. My base case is that battery improvement will be sustained, but its far from a given – this is the assumption to watch.

I’m expecting power prices during the day to continue to fall over the next few years as we end up with a surplus of power from renewables. This will actually drive the pick up in batteries – the more significant the difference between the day price and the evening price, the bigger the incentive for batteries to arbitrage the difference.

The US is not the market to watch – energy costs are lower there than almost any other developed market. A better indicator of the future will be developments in Europe.

So, how does this affect investments:

None of this relies on carbon taxes. Carbon taxes will only accelerate these changes.

*Damien Klassen is Head of Investments at the Macrobusiness Fund, which is powered by Nucleus Wealth.

Cost-benefit analysis does not work well for wicked problems like climate change.

Economic growth at odds with the environment, NGO says.