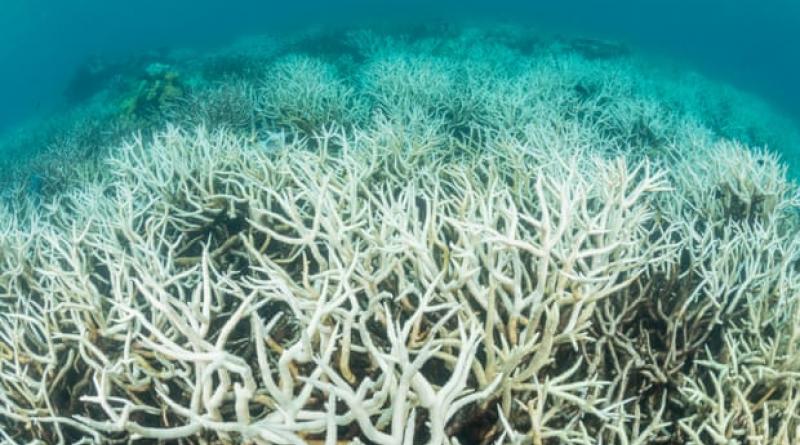 Rising ocean temperatures could have pushed the world’s tropical coral reefs over a tipping point where they are hit by bleaching on a “near-annual” basis, according to the head of a US government agency program that monitors the globe’s coral reefs.

Dr Mark Eakin, coordinator of Coral Reef Watch at the National Oceanic and Atmospheric Administration, told Guardian Australia there was a risk that mass bleaching seen along the length of the Great Barrier Reef in 2020 could mark the start of another global-scale bleaching event.

Tropical coral reefs tend to be at a higher risk of bleaching during times when the Pacific Ocean is in a phase known as El Niño. The latest bleaching on the reef has hit during this cycle’s neutral phase.

“The real concern is with this much bleaching without tropical forcing,” Eakin said. “This may be a sign we’ve now tipped over to near-annual bleaching in many locations.”

“It’s quite concerning that we are getting this much heat stress across the Great Barrier Reef in an Enso [El Niño southern oscillation]-neutral year.

“What we are seeing on the Great Barrier Reef and potentially elsewhere is really being driven just by anthropogenic climate change.

“If we get another El Niño, the odds are almost 100% that we will see another global bleaching event.”

Aerial surveys of 1,020 individual reefs completed across the length of the 2,300km marine park confirmed last week a third mass bleaching event in only five years.

Corals bleach when they sit in abnormally hot water for too long. Reefs and corals can recover from mild bleaching, but severe and prolonged heat stress can kill corals.

Eakin said that in January Coral Reef Watch’s models were warning that heat stress would build across the reef in February and March. Sea temperatures over the Great Barrier Reef were the highest on record this February.

Satellite data later confirmed the modelling results which, Eakin said, was received “with a sense of dread” among scientists.

“I was not ready to have another bleaching event this quickly,” he said.

Eakin said the agency’s modelling for the next four months was showing a “classic pattern of heat stress” that had preceded previous global bleaching events.

Heat was predicted to rise first in the southern Indian Ocean, then to south-east Asia and into the Coral Triangle.

He said it was “too early” to say if a global bleaching event was on the way, but “it would not really surprise me”.

Eakin said that when severe bleaching causes mass mortality of corals, “those events take a decade or more for recovery. We are seeing these events far too frequently”.

As the planet gains heat from increased greenhouse gases in the atmosphere, about 90% of that extra heat is taken up by oceans. In January, a study of heat down to 2km in depth concluded that 2019 was the warmest year on record.

Eakin said ocean heat content data showed the world’s oceans were gaining heat. “There’s so much heat that has been absorbed in the upper ocean that all the coral reefs are much closer now to their bleaching threshold. As result, it’s very easy to tip them over.”

Data from nine days of aerial surveys over the Great Barrier Reef, carried out in mid-March, are being analysed and compiled at the ARC Centre of Excellence for Coral Reef Studies at James Cook University.

Dr Neal Cantin, a senior coral biologist at the Australian Institute of Marine Science, said because of the warming of the oceans caused by climate change, “we are already committed to more frequent and more severe bleaching in the next decade”.

Cantin said the Australian Institute of Marine Science would be carrying out monitoring of sites in the coming months to see which corals had survived this event and how 2020 had impacted recovery from previous bleaching.

“We need to understand the full extent of significant mortality,” he said.

Many areas of the Great Barrier Reef are known to have experienced severe bleaching this summer, likely killing many corals, but others, including tourist reefs near Cairns and the Whitsundays, only experienced mild bleaching. Most offshore reefs in the far north escaped bleaching entirely.

“With mild bleaching, the animal survives but growth is slowed and they become more susceptible to disease,” said Associate Prof Tracy Ainsworth at the University of New South Wales.

She said mild bleaching can also impact the ability of the corals to spawn which can slow recovery from impacts.

“We have known for 20 years that probably by about 2020, we would start to see annual bleaching.”

Eakin added: “Even if the corals don’t die, bleached corals are injured and starving and they are more susceptible to disease. They will also reduce their reproductive output in a bleaching year and the year after.”

Cantin said that unlike in 2016 and 2017, the bleaching in 2020 appeared to have covered “the entire system” of the Great Barrier Reef.

Corals have a symbiotic relationship with algae that delivers nutrients and colour to the animal.

“Completely white coral means it has lost probably 95-100% of their symbiont algae and they will struggle to recover,” Cantin said.

“With moderate-level bleaching you will see the tips go white with some sections still having pigmentation left – they do have a good chance of surviving,” he said.

The Great Barrier Reef’s values as a world heritage-listed location are due for review at a meeting scheduled in China in June. Unesco has said that meeting is under review due to the Covid-19 pandemic.

In December 2019, Australia submitted a report to the committee that conceded climate change had impacted the reef’s values as a world heritage site since it was first listed in 1981.

* title photo: Coral bleaching on the Great Barrier Reef in Australia. Sea temperatures over the reef were the highest on record this February. There are fears the world’s tropical coral reefs may have reached a tipping point of bleaching nearly every year. Photograph: Nature Picture Library/Alamy Stock Photo