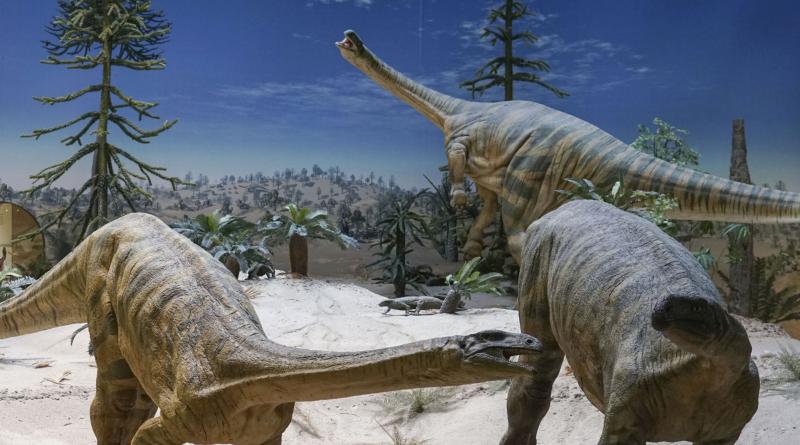 Why did it take sauropods 15 million years to cross the supercontinent of pangea?

Why did it take sauropods - the family of dinosaurs which includes the very biggest creatures ever to have walked the earth - so long to reach Greenland, from South America, where they first emerged?

This question has long puzzled paleontologists, but new research suggests a major shift in the Earth’s climate allowed the migration.

The sauropod family, which includes species such as the enormous titanosaur, patagotitan, diplodocus and brachiosaurus, emerged in what is now Argentina and Brazil, around 230 million years ago, but despite all the continents being locked together, it took them 15 million years to reach what is now Greenland.

Dennis Kent, of Columbia University’s Lamont-Doherty Earth Observatory, and Lars Clemmensen from the University of Copenhagen, have calculated that even if a dinosaur herd had walked only one mile per day, at that time it would have taken them less than 20 years to make the journey between South America and Greenland.

But their new paper points out an “intriguing climatic phenomenon” which may have helped the sauropods eventually make the journey.

The scientists examined previous estimates which suggested that sauropods arrived in Greenland sometime between 225 and 205 million years ago. But by painstakingly matching up ancient magnetism patterns in rock layers at fossil sites across South America, Arizona, New Jersey, Europe and Greenland, they came up with a more precise estimate: It suggests sauropods arrived in what is now Greenland around 214 million years ago. At the time, the continents were all joined together, forming the supercontinent Pangea.

So why did it take them so long to expand into the Northern Hemisphere?

“In principle, the dinosaurs could have walked from almost one pole to the other,” said Dr Kent.

“There was no ocean in between. There were no big mountains. And yet it took 15 million years.

“It’s as if snails could have done it faster.”

But the researchers believe a “tremendous dip” in atmospheric CO2 around the time the sauropods would have been migrating 214 million years ago could be the key to unlocking the mystery of why it took so long.

Until about 215 million years ago, the Triassic period had experienced extremely high CO2 levels, with concentrations at around 4,000 parts per million - about 10 times higher than today.

But between 215 and 212 million years ago, the CO2 concentration halved, dropping to about 2,000ppm, the records show.

The scientists said that though the timing of these two events - the plummeting CO2 and the sauropod migration - could be pure coincidence, they think they may be related.

In the paper, they suggest that the milder levels of CO2 may have helped to remove climatic barriers that may have trapped the sauropodomorphs in South America.

On Earth, areas around the equator are hot and humid, while adjacent areas in low latitudes tend to be very dry.

In the paper, Dr Kent and Prof Clemmensen suggest that on a planet supercharged with CO2, the differences between those climatic belts may have been extreme - perhaps too extreme for the sauropod dinosaurs to cross.

“We know that with higher CO2, the dry gets drier and the wet gets wetter,” said Dr Kent.

The high CO2 conditions 230 million years ago could have made the arid belts too dry to support the movements of large herbivores that need to eat a lot of vegetation to survive.

The tropics, too, may have been locked into rainy, monsoon-like conditions that may not have been ideal for sauropods. There is little evidence they ventured forth from the temperate, mid-latitude habitats they were adapted to in Argentina and Brazil.

But when the CO2 levels dipped 215-212 million years ago, the scientists suggest the tropical regions may have become more mild, and the arid regions became less dry.

There may have been some hospitable passageways, such as along rivers and strings of lakes, which would have helped sustain the herbivores along the 6,500-mile journey to Greenland, where their fossils are now abundant.

At that time Greenland would have had a temperate climate with much milder winters, because there were no polar ice sheets at that time.

“Once they arrived in Greenland, it looked like they settled in,” said Dr Kent.

“They hung around as a long fossil record after that.”

The idea that a dip in CO2 could have helped these dinosaurs to overcome a climatic barrier is speculative but plausible, and it seems to be supported by the fossil record, said Dr Kent.

Sauropod body fossils have not been found in the tropical and arid regions of this time period -- although their footprints are occasionally found - suggesting they did not linger in those areas.

Dr Kent said he hopes to continue working to better understand the big CO2 dip, including what caused it and how quickly CO2 levels dropped.

The research is published in the Proceedings of the National Academy of Sciences.

CO2 in Earth's atmosphere nearing levels of 15m years ago.