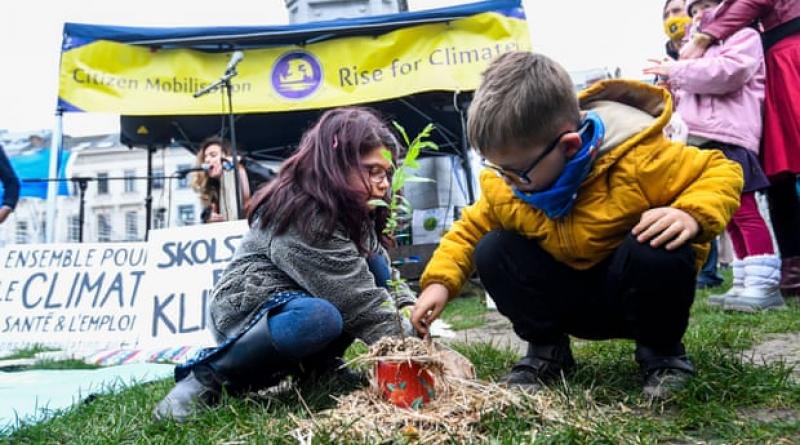 Survey of 600 people finds some parents regret having offspring for same reason.

People worried about the climate crisis are deciding not to have children because of fears that their offspring would have to struggle through a climate apocalypse, according to the first academic study of the issue.

The researchers surveyed 600 people aged 27 to 45 who were already factoring climate concerns into their reproductive choices and found 96% were very or extremely concerned about the wellbeing of their potential future children in a climate-changed world. One 27-year-old woman said: “I feel like I can’t in good conscience bring a child into this world and force them to try and survive what may be apocalyptic conditions.”

These views were based on very pessimistic assessments of the impact of global heating on the world, the researchers said. One respondent, for example, said it would “rival world war one in its sheer terror”. The research also found that some people who were already parents expressed regret over having their children.

Having a child also potentially means that person going on to produce a lifetime of carbon emissions that contribute to the climate emergency, but only 60% of those surveyed were very concerned about this carbon footprint.

“The fears about the carbon footprint of having kids tended to be abstract and dry,” said Matthew Schneider-Mayerson, of Yale-NUS College in Singapore, who led the study. “But the fears about the lives of existing or potential children were really deep and emotional. It was often heartbreaking to pore through the responses – a lot of people really poured their hearts out.”

The number of people factoring climate change into their reproductive plans was likely to grow, Schneider-Mayerson said, as the impacts of global heating became more obvious. “To address this, we really need to act immediately to address the root cause, which is climate change itself,” he said.

The study, published in the journal Climatic Change, found no statistically significant difference between the views of women and men, though women made up three-quarters of respondents. A 31-year-old woman said: “Climate change is the sole factor for me in deciding not to have biological children. I don’t want to birth children into a dying world [though] I dearly want to be a mother.”

The researchers found that 6% of parents confessed to feeling some remorse about having children. A 40-year-old mother said: “I regret having my kids because I am terrified that they will be facing the end of the world due to climate change.”

Schneider-Mayerson said: “I was surprised – for parents, this is an extremely difficult statement to make.”

The study is the first peer-reviewed academic study of the issue and analysed a large group of concerned people. The survey was done anonymously so people could express themselves freely.

“It is an unprecedented window into the way that [some people] are thinking and feeling about what many consider to be the most important decision in their lives,” said Schneider-Mayerson.

Other findings were that younger people were more concerned about the climate impacts their children would experience than older respondents, and that adoption was seen as a potential alternative to having biological children.

The study indicated that climate-related fears for their children’s lives were rooted in a deeply pessimistic view of the future. Of the 400 respondents who offered a vision of the future, 92.3% were negative, 5.6% were mixed or neutral, and just 0.6% were positive.

One 42-year-old father wrote that the world in 2050 would be “a hot-house hell, with wars over limited resources, collapsing civilisation, failing agriculture, rising seas, melting glaciers, starvation, droughts, floods, mudslides and widespread devastation.” Schneider-Mayerson said he thought the pessimistic views held were all within the range of possibilities, if not necessarily the most likely outcome.

However, he said further research was needed on a more diverse group of people and in other parts of the world. The self-selecting group in the study all lived in the US and were largely white, more highly educated and liberal.

Previously, opinion polls of the general public indicated people were connecting the climate crisis and reproduction, with one poll in 2020 finding that among 18- to 44-year-old US citizens without children, 14% cited climate change as a “major reason” for not having children. In 2019, scores of women in the UK said they were starting a “birth strike” until the climate crisis was resolved.

Seth Wynes, of Concordia University in Canada, whose 2017 study found having one less child was the greatest impact individuals can have in fighting climate change, said the researchers had properly stressed that the sample was not representative of all Americans. But he said the distress over the decision to have children made sense. “Climate change is already affecting our world in frightening ways and so it’s certainly reasonable to account for the climate crisis when thinking about the future of one’s family.

“As climate change continues to worsen, it is important to understand how perceptions of the future can change the way everyday people plan their lives,” Wynes said. “This study is an initial step in growing that understanding.”

There is also growing evidence of climate anxiety affecting mental health and earlier in 2020 more than 1,000 clinical psychologists signed an open letter warning of “acute trauma on a global scale”. Last week, a survey revealed that more than half of child and adolescent psychiatrists in England were seeing patients distressed about the state of the environment.