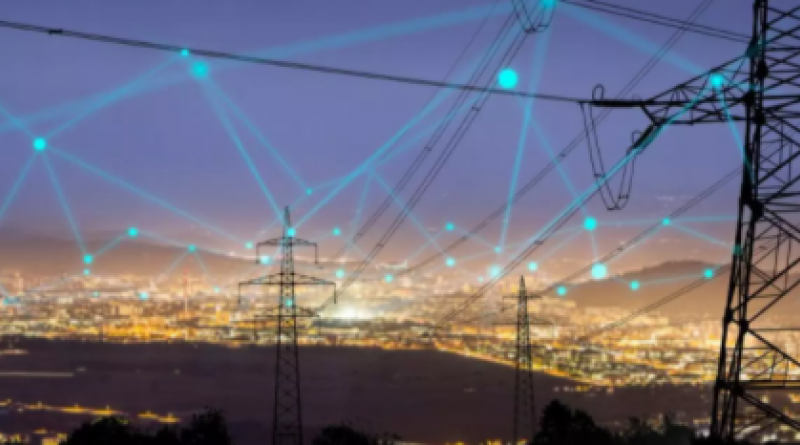 Historically, vertically integrated utilities, whether publicly or privately owned, invested in transmission lines to connect their large thermal power plants to major load centers. As more countries and states introduce competitive wholesale markets and require ever-higher percentage of renewables in the electricity generation mix, both the function and the operation of the transmission network is radically affected as its main role changes to one of integrating higher levels of variable renewable generation into the grid while maintaining the reliability of the system – which means different flow patterns and a totally different transmission system. 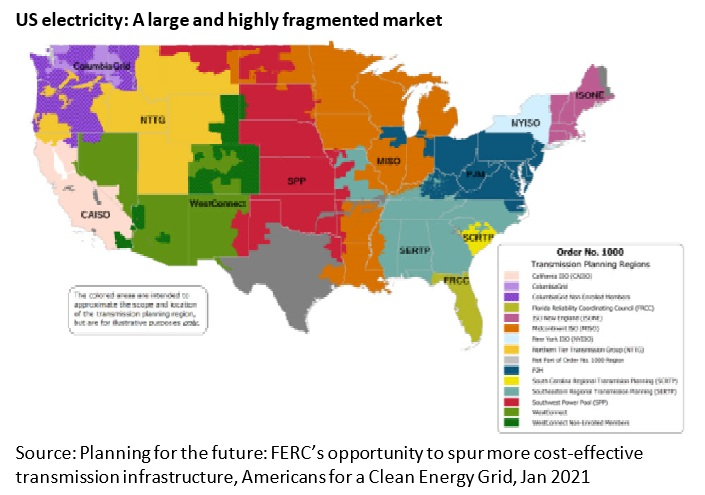 Grid operators in Europe, Australia, the US and elsewhere are unanimous in pointing out that future transmission networks must be redefined, redesigned and modernized with the future requirements in mind. Given the vast investments required and the long planning, permitting and construction periods, the time has arrived for fresh thinking for a different transmission network – and finding new ways to finance them and allocate the costs among the stakeholders.

Nowhere is the need more acute than in the US with its fragmented markets and non-markets (map) and a weak federal regulator, the Federal Energy Regulatory Commission (FERC) with limited authority and subject to the changing priorities and whims of the politicians in Washington DC.

In Jan 2021, timed to coincide with Biden’s inauguration, Americans for a Clean Energy Grid released a paper titled Planning for the future: FERC’s opportunity to spur more cost-effective transmission infrastructure. It’s an odd title from a previously unknown group. It is heavily prescriptive, as in FERC shall do this and this is how to do it. The report acknowledges the contributions of a number of high-profile experts and academics but is not clear whose views it represents. It is a timely read especially given the recent power outages in ERCOT (page 2). The executive summary starts by stating

It says, “We now have ample evidence to see that the current transmission planning regulations leave a large gap remaining between what is being done and what is needed to address current and future needs,” adding,

“To minimize analysis and help ensure that costs are allocated in a stable and predictable way, the Commission should direct planning entities to allocate the costs of portfolios of projects as a group, rather than proceeding only on a project-by-project basis.”

In particular, it suggests that FERC, “…. should reform the interregional planning process to eliminate the multi-stage process that currently prevents interregional projects from being constructed.” 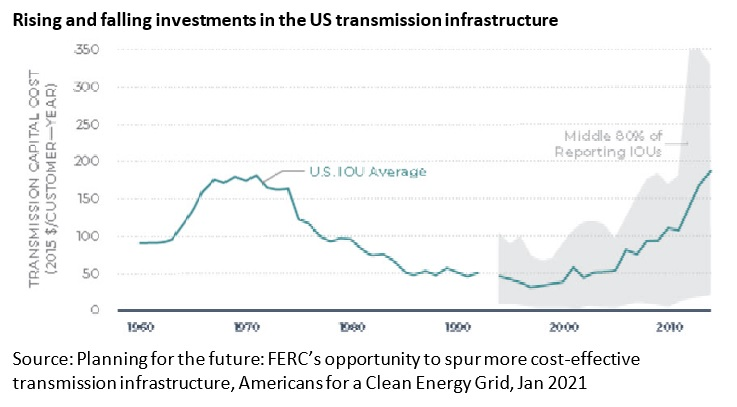 The report provides a good overview of the historical and prevailing trends noting that the US experienced a transmission construction boom in the 1960s and 70s, with the average new annual investment by the investor-owned utilities (IOUs) of around $200/customer-year at its peak during the late 1960s and early 70s before falling to less than $100 in the 1980s and 1990s (visual)

As the aging coal and nuclear fleet retires and more renewables are added, the existing transmission network is not only aging but is no longer fit for purpose. 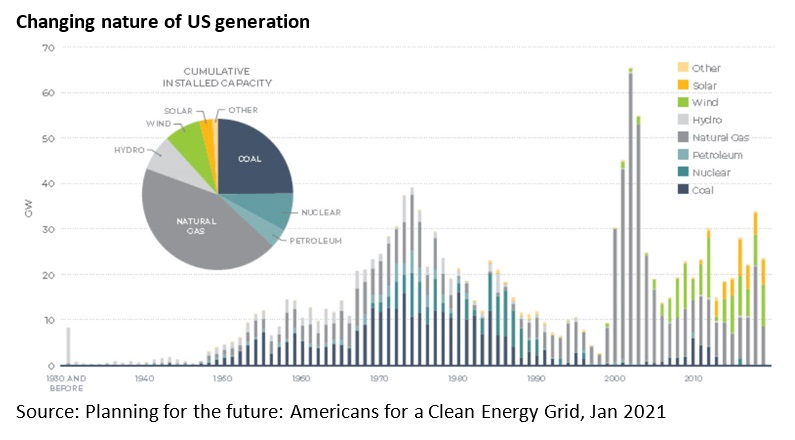 “As the nation’s resource mix evolves, the transmission system should be built to address future needs. Well-known commitments by major end use customers, utilities, cities, and states in support of net-zero or minimal carbon futures have not been adequately captured in grid planning scenarios. Information about the changing costs of different resource types are also widely recognized as driving significant system changes. Transmission plans can only yield reliable and efficient outcomes if they account for widely known trends and reasonable projections of future transmission needs. In short, plans should be about the future.”

Moreover, the push towards electrification of transportation, industry and buildings end-uses will have an enormous effect on future system needs. While regional transmission planning processes have made some strides forward to address this growing trend, they generally have not caught up to it and do not have adequate processes in place to ensure that demand projections will meet reasonable electrification scenarios.

The paper points to a Brattle Group analysts that estimated that $3-7 billion in annual incremental transmission investment will be needed to meet increased demand caused by electrification between 2018 and 2030, with $7-25 billion between 2031 and 2050.

Transmission investments are not only huge but hard to finance because the costs and benefits accrue to different stakeholders and are hard to properly allocate. According to William Hogan of Harvard University,

Similarly, Paul Joskow of MIT notes that, “… the natural monopoly and public goods aspects of transmission that do not lend themselves to a competitive structure…” leading him to advocate “proactive broad regional planning to achieve the efficient transmission network.” Left on their own, Joskow says the investments needed to expand the inter-regional transmission capacity, “… are being addressed either too slowly or not at all.” 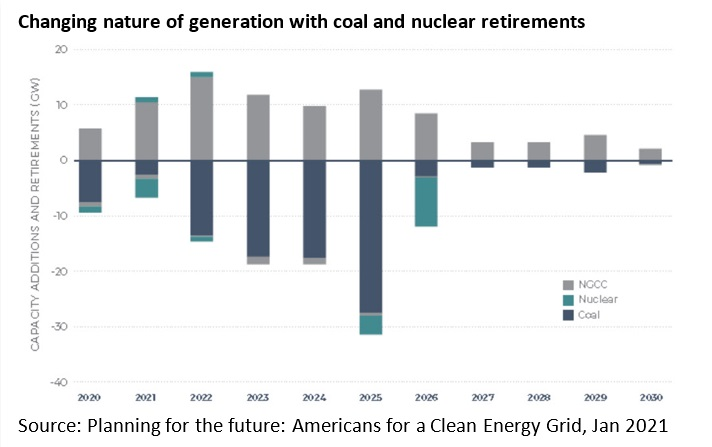 The report does a good job of describing the many limitations of relying on competitive forces to make adequate investment in transmission.

Making matters worse, “Inter-regional projects (i.e., those extending multiple states or wholesale market boundaries) face a ‘triple hurdle’ in that they must not only be selected via the inter-regional process, but also must gain approval from each respective RTO. This “triple hurdle” goes to the heart of the challenge in inter-regional planning.

Europe and the US suffer from this multi-regional or inter-regional challenge. Australia, while having its own unique problems – most notably a long stringy network connecting distant population centers across a vast geographical footprint – at least has a single national electricity market, the NEM. But even in Australia, with multiple, overlapping regulators, it is not always easy to do long-range planning across the entire eastern part of the country.

In the case of the US, the report proposes that FERC, “…  should at a minimum require compatible benefits metrics (for transmission investments) and study approaches between neighboring regions in approving interregional projects, and mandate that these metrics seek to maximize net benefits on an inter-regional (rather than) regional basis.” Sensible. 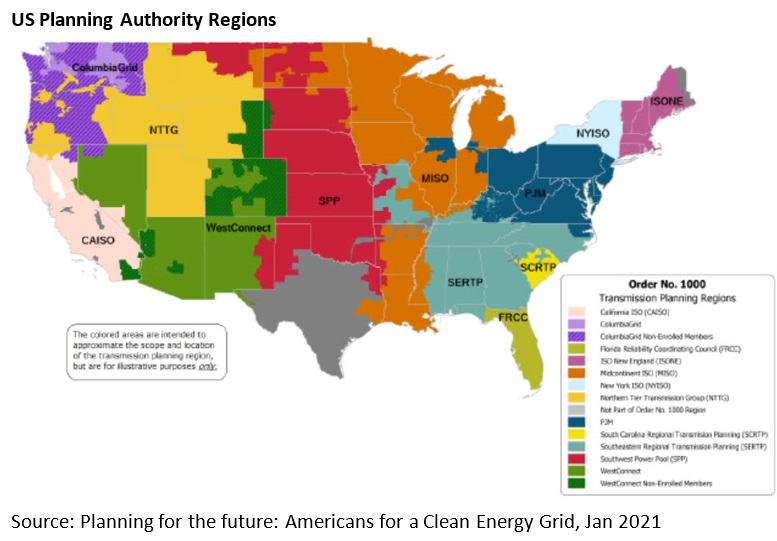 On the critical issue of how transmission costs should be allocated, the report refers to prior FERC Orders, Nos. 890 and 1000 and says,

“… knowing how the costs of transmission facilities [will] be allocated is critical to the development of new infrastructure because transmission providers and customers cannot be expected to support the construction of new transmission unless they understand who will pay the associated costs.”

“The Commission should ensure sufficiently broad geographic scope of planning authorities and consider requiring the formation of inter-regional planning boards with full authority to propose links to FERC that select, and cost allocate inter-regional projects.”

Perhaps the most vexing issue facing FERC is exactly what it can and cannot do, what is within and what is without its jurisdiction. Historically, FERC has been either ignored or reprimanded for stepping out of bounds. One notable case was under the chairmanship of Pat Wood during the second Bush administration where FERC proposed a standard market design or SMD – a blueprint to move the entire US towards competitive wholesale markets with, perhaps, as many as 10 RTOs all abiding by the same rules and standards, the essence of the SMD. Wood was unceremoniously replaced with a less adventurous chairman. Since then, FERC commissioners have been more cautious and less proactive, sticking to infrequent and politically safe orders.

The report gives FERC encouragement to act and be more proactive especially now that Biden is in the White House. It unequivocally declares, “Commission has authority to carry out these (i.e., the report’s suggested) reforms.”

Broadly speaking, to issue a new planning rule under Section 206 of the Federal Power Act, FERC must show, based on substantial evidence, that existing planning practices are not just and reasonable or are unduly discriminatory.

The report claims that numerous studies demonstrate that large, high-voltage transmission infrastructure would yield significant net benefits. Yet regional planning processes are largely not approving such infrastructure, instead yielding locally focused projects that in many cases are not as cost-effective as regional or interregional solutions could be.

Most observers agree that Biden’s stated goal of a 100% carbon-free electricity sector by 2035 as well as his other ambitious plans for moving toward carbon neutrality cannot be sustained with the exiting transmission network or the existing modes of planning and investing. The report is well-timed for the challenges ahead. n

How the Texas electricity system produced low-cost power but left residents out in the cold.