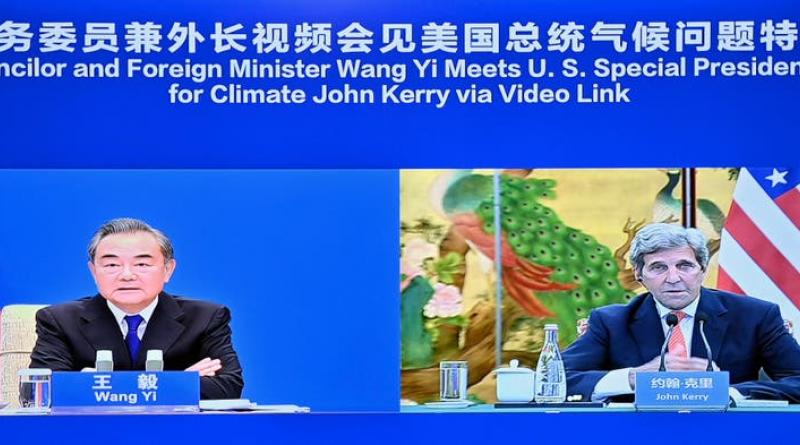 China’s foreign minister Wang Yi warned the US that the deteriorating relations between the world’s two largest economies could undermine their cooperation on climate change.

“China-US climate change cooperation cannot be separated from the general environment of relations,” Mr Wang said during his exchange with climate envoy John Kerry, according to the ministry.

“The United States should meet China halfway and take positive actions to push relations back on track,” he said.

Mr Wang spoke with the US climate envoy by video link on Wednesday, calling on the US to improve the relationships that became frayed during Donald Trump’s administration when a trade war erupted with Beijing and Washington over issues ranging from technology, visas, China’s treatment of Muslim minorities and crackdown on Hong Kong.

Mr Kerry, who is in China’s Tianjin city for climate talks with his Chinese counterparts, urged Beijing to take additional steps to reduce emissions, the US State Department said.

He said China, which is the largest carbon emitter in the world, "plays a super-critical role" in the effort to combat climate change, according to CGTN.

Mr Kerry told Chinese vice premier Han Zheng that there is “no way” for the world to solve the climate crisis without China’s “full engagement and commitment.”

The talks will continue through Friday to reach a common ground before an international summit in Scotland later this year. Mr Kerry is in the second leg of a trip to Asia, before he meets officials in Japan.

The talks are seen as an effort to spur the two countries to cooperate on emissions-cutting technology after years of soured relations that have been carried forward to the Biden administration from the previous.

The world’s biggest coal user, China obtains roughly 60 per cent of its power from coal and is the world’s biggest source of greenhouse gases. It plans to build more coal-fired power plants but still plans to taper its use of the fossil fuel.

China , however, has pointed to historical US emissions as a reason to resist action even as it makes advancements in solar power and other renewable energy sources.

Beijing is targeting to generate 20 per cent of the country’s total energy consumption from renewables by 2025, becoming carbon-neutral by 2060 and reducing total emissions starting from 2030.

US president Joe Biden has set the target to cut up to 52 per cent of US greenhouse gas emissions by 2030.

Mr Kerry is in Tianjin to meet his Chinese counterpart Xie Zhenhua this week. Both Mr Xie and Mr Kerry have described global warming as a threat that demands all joint efforts by countries.