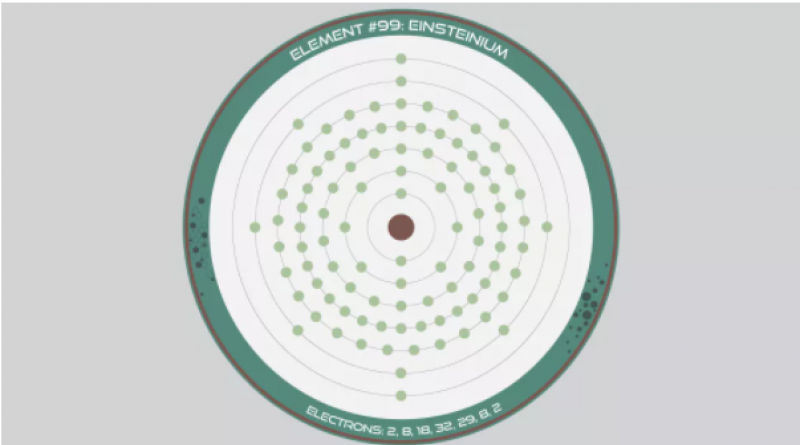 Scientists have uncovered some of its basic chemical properties for the first time.

Scientists have successfully studied einsteinium — one of the most elusive and heaviest elements on the periodic table — for the first time in decades. The achievement brings chemists closer to discovering the so-called "island of stability," where some of the heftiest and shortest-lived elements are thought to reside.

The U.S. Department of Energy first discovered einsteinium in 1952 in the fall-out of the first hydrogen bomb test. The element does not occur naturally on Earth and can only be produced in microscopic quantities using specialized nuclear reactors. It is also hard to separate from other elements, is highly radioactive and rapidly decays, making it extremely difficult to study.

Researchers from the Lawrence Berkeley National Laboratory (Berkeley Lab) at the University of California, recently created a 233-nanogram sample of pure einsteinium and carried out the first experiments on the element since the 1970s. In doing so they were able to uncover some of the element's fundamental chemical properties for the first time. 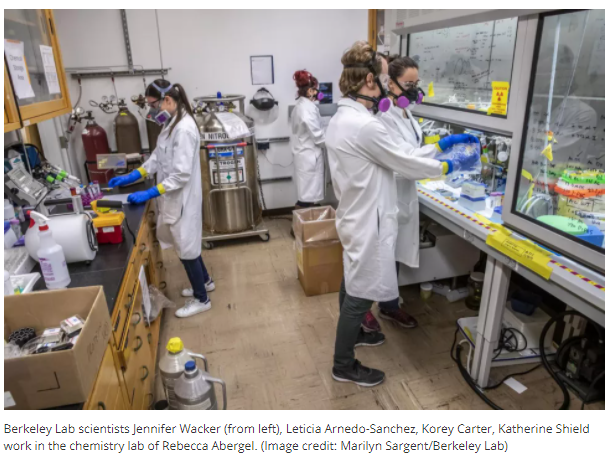 Physicists know almost nothing about einsteinium.

"It is hard to make just because of where it is in the periodic table," co-author Korey Carter, an assistant professor at the University of Iowa and former scientist at Berkeley Lab, told Live Science.

Like other elements in the actinide series — a group of 15 metallic elements found at the bottom of the periodic table — einsteinium is made by bombarding a target element, in this case curium, with neutrons and protons to create heavier elements. The team used a specialized nuclear reactor at the Oak Ridge National Laboratory in Tennessee, one of the few places in the world where einsteinium can be made.

However, the reaction is designed to make californium — a commercially important element used in nuclear power plants — and so it makes only a very small amount of einsteinium as a byproduct. Extracting a pure sample of einsteinium from californium is challenging because of similarities between the two elements, which meant the researchers ended up with only a tiny sample of einsteinium-254, one of the most stable isotopes, or versions, of the elusive element.

"It is a very small amount of material," Carter said. "You can't see it, and the only way you can tell it is there is from its radioactive signal."

However, getting the einsteinium is only half the battle. The next problem is finding a place to keep it.

Einsteinium-254 has a half-life of 276 days — the time for half of the material to decay — and breaks down into berkelium-250, which emits highly damaging gamma radiation. Researchers at Los Alamos National Laboratory in New Mexico designed a special 3D-printed sample holder to contain the einsteinium and protect the Berkeley Lab scientists from this radiation.

However, the element's decay also created other problems for the researchers.

"It's decaying consistently, so you lose 7.2% of your mass every month when studying it," Carter said. "You have to take this into account when you are planning your experiments."

The team at Berkeley Lab was used to dealing with other elements with short half-lives. Even so, the team began their work just before the outbreak of the COVID-19 pandemic, which meant that they lost valuable time and were unable to complete all the planned experiments.

The main finding from the study was the measurement of the einsteinium bond length — the average distance between two bonded atoms — a fundamental chemical property that helps scientists predict how it will interact with other elements. They found that einsteinium's bond length goes against the general trend of the actinides. This is something that had been theoretically predicted in the past, but has never been experimentally proved before.

Compared with the rest of the actinide series, einsteinium also luminesces very differently when exposed to light, which Carter describes as "an unprecedented physical phenomenon." Further experiments are needed to determine why.

The new study "lays the groundwork for being able to do chemistry on really small quantities," Carter said. "Our methods will allow others to push boundaries studying other elements in the same way."

The team's research could also make it easier to create einsteinium in the future. In that case, einsteinium could potentially be used as a target element for the creation of even heavier elements, including undiscovered ones like the hypothetical element 119, also called ununennium. One of the ultimate goals for some chemists would be to then discover hypothetical superheavy elements that have half-lives of minutes or even days — meaning they "live" on this island of stability — compared with the microseconds at most for the half-lives of other heavy elements.

The study was published online Feb. 3 in the journal Nature.