Chalk paint and police raids: why climate activists are under fire 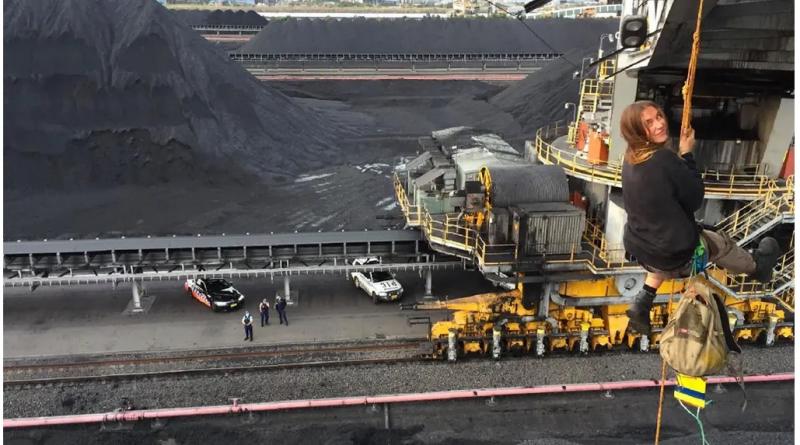 As protesters obstructed coal trains bound for the Port of Newcastle for days, the local environment centre kept its distance.

But after two weeks of disruptions caused by Blockade Australia, police officers arrived at the Hunter Valley Environment Centre on a Friday afternoon last month with a warrant to search the premises and a nearby sharehouse.

Founded in 2004 in coal country NSW, the centre’s work mostly involved fact-finding and awareness campaigns about local conservation issues, water pollution and the monitoring of coal-ash dams left behind by shuttered power plants.

“It seems wildly over the top to us. They turned around and raided a local environment centre in response to a couple weeks of protesting taking place,” Woods says.

The incident is the most recent example of what civil society groups have described as a growing “climate of repression” faced by environmental activists in Australia.

Though evidence is mostly anecdotal, a report released last week by the Human Rights Law Centre, Greenpeace Australia Pacific and the Environmental Defenders Office highlighted how the use of heavy police tactics, punitive bail conditions, private lawsuits, the introduction of anti-protest laws and inflammatory rhetoric from business and political leaders has combined to create an alarming trend.

Yusur Al-Azzawi, senior lawyer at the Human Rights Law Centre, who co-authored the report, says there has been no one single turning point, but the hostility to climate protests has grown in the past few years.

“Climate defenders are being prosecuted, intimidated and harassed simply because they’re calling for action on climate change,” Al-Azzawi says. “What’s really frightening is we’re not talking about one or two isolated incidents. We’re looking at a systemic and broad-ranging attack.”

Other civil society groups have voiced similar concerns. On Monday eight groups including 350.org, the Australian Youth Climate Coalition and the Wilderness Society released a statement calling out “the broader treatment of protestors by Australian law enforcement”.

“The raid on the Hunter community environment centre in Newcastle last week, to me it recalled the attacks Amnesty sees all around the world on activists and human rights defenders, where governments raid their office, their homes in an attempt to crack down on dissent,” White said.

“I think that purpose is to silence that dissent to stop people protesting.”

A NSW police spokesperson said it respected the right to peaceful protest, but did not answer specific questions about why the local environment centre was targeted.

“The NSW police force recognises and supports the rights of individuals and groups to protest peacefully,” the spokesperson said. “As with any unauthorised protest activity, anyone who breaks the law or engages in antisocial behaviour will be dealt with accordingly.”

The raid against the centre isn’t the only example of a police crackdown on climate activism in recent times.

Last week, 22-year-old Eric Serge Herbert was sentenced to 12 months for his part in blockading the Port of Newcastle.

In Western Australia, three protesters who cut off the only road to the Burrup Peninsula – where the gas industry operates in the Pilbara – were given strict bail conditions which prevented them from associating with a list of activists identified by police. Though all drove, two of the three were forced to fly home as they were not allowed to be in the same car together.

In August, police raided the homes of six Extinction Rebellion activists in Perth amid allegations they graffitied a pedestrian bridge with washable chalk paint within view of Woodside’s headquarters during a protest against the fossil fuel giant’s Scarborough gas project.

Kelly Hawes, says police did not do anything at the time so she was surprised when officers led by the state security investigation group raided her home in the early hours of the morning about two weeks later.

“They were actually anti-terrorism cops. It was chalk paint,” Hawes says. “They filled my house. It was me and all these massive, strapped officers standing around in my tiny apartment.”

Ordinarily minor offences such as this would be handled by court summons – if they are picked up at all. Though she became involved with Extinction Rebellion on the understanding she may face arrest, Hawes says the police response was “total overreach” and an attempt at intimidation.

WA police were contacted but did not respond by publication.

‘It’s going to ratchet up’

Protest – and environmental protests in particular – have long been a political lightning rod in Australia and authorities often antagonistic, but some argue climate change protests present a unique threat.

Asio has been actively monitoring anti-coalmining activists since 2012, although their interest dates back 40 years to when the Australian intelligence community first recognised the risks posed by climate change. A 1981 Office of National Assessment report suggested environmental groups may mobilise as climate change science was “sensationalised by the press and others”, with their main concern the implication for fossil fuel exports.

That concern remains front of mind for the government. Days before the Hunter Environment Centre was raided, deputy prime minister Barnaby Joyce told reporters during a stop in Singleton that interruptions to the flow of coal into the Port of Newcastle caused by protesters had cost $60m.

“If they’ve got other ways that this nation can earn money right now, then we’re all ears,” Joyce said. “In the meantime, we’ve got to make a buck.”

Simon Rice, professor of law and social justice from the University of Sydney, says compared to other movements such as Black Lives Matter or even the recent anti-lockdown protests, climate change protests are unique for the way they pose a direct challenge to business interests.

“I actually think climate change protests go to an actual threat to our current state’s source of power which is fossil fuel exports,” Rice says. “Climate change presses all those buttons.”

In October last year, Rice himself was caught up in this while attending a student climate change rally at the University of Sydney as a legal observer. He was pushed to the ground by police and fined $1,000.

Rice says that as climate change worsens and governments are seen to be doing far too little, protesters will only grow more ambitious in targeting businesses they feel are responsible. This in turn is likely to lead to a more aggressive response form law enforcement and political leaders who feel pressured to act.

“It’s going to ratchet up,” Rice says. “Governments are increasingly willing to use powers they have available to them with more confidence and less discretion than they have before.”

Dr Kristy Campion, a lecturer in terrorism studies at Charles Sturt University says that while authorities – particularly in the US – have been nervous about the threat posed by “eco-terrorism” since the 90s, it has largely proven an illusion.

“One of the things I constantly shake my head at is this idea it’s all driven by leftwing hippies that have escalated to the point of militancy,” Campion says. “In terms of capacity of concern for the environment to manifest in terrorist violence, well, yes there is a capacity, but it’s not from the left, it’s from the right.”

Campion says while the most radical environmental groups limit their activity to non-violent direct action – where property is damaged but not people – white nationalist groups already comfortable with violence have been increasingly lifting environmentalist language.

While this threat should be monitored, Campion says the golden rule for law enforcement and governments going forward should be to ensure any response to a perceived threat remained proportional.

“If you have someone doing art on the sidewalk with chalk, that manifests as a fundamentally different issue than if they’re planting a bomb in a public place,” she says. “If you do not give people the space to dissent and to protest, you will only catalyse stronger reactions against yourself.”