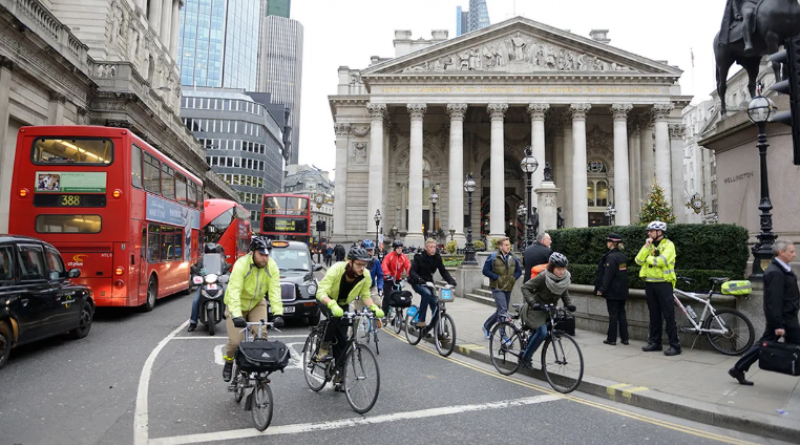 Following in the footsteps of leaders in Milan and New York City who are heeding global calls to #BuildBackBetter from the coronavirus pandemic, London Mayor Sadiq Khan on Friday unveiled plans to create "one of the largest car-free zones in any capital city in the world" to improve local air quality and encourage more walking and cycling.

"This is genuinely exciting," London-based author and physicist Helen Czerski tweeted of the plans. "Yes, of course, it will be disruptive (and like any change, there will be both winners and loser at the start). But it could also make London a far more human place and a new sort of city, with huge health benefits for everyone."

Environmentalists and public health advocates also welcomed the initiative. The UK branch of the advocacy group Greenpeace declared: "This is a great first step!"

Khan announced the upcoming transformation of central London streets — intended to help promote social distancing — in a joint statement with Transport for London (TfL). The government body will release more details in the weeks ahead, but the statement said roads between London Bridge and Shoreditch, Euston and Waterloo, and Old Street and Holborn may soon be limited to buses, pedestrians and cyclists.

Beginning Monday, the city will also reintroduce fee schemes for drivers that aim to cut pollution and help tackle the climate emergency: the low emission zone, the ultra low emission zone, and the congestion charge — the last of which may temporarily increase next month.

Khan has made tackling London's polluted air a top priority since taking office in 2016. The Labour Party member released figures last month showing how air quality in the UK capital has "dramatically improved" in the wake of both anti-pollution measures introduced in 2017 and the city's pandemic-related lockdown.

"Covid-19 poses the biggest challenge to London's public transport network in TfL's history," Khan said Friday. "It will take a monumental effort from all Londoners to maintain safe social distancing on public transport as lockdown restrictions are gradually eased."

"That means we have to keep the number of people using public transport as low as possible," he added. "And we can't see journeys formerly taken on public transport replaced with car usage because our roads would immediately become unusably blocked and toxic air pollution would soar."

The mayor urged all of the city's 32 boroughs to support the plans and work with officials to implement similar restrictions. He encouraged all Londoners to walk and cycle more while steering clear of public transit "unless it is absolutely unavoidable."

Khan also highlighted that the plans have benefits beyond ensuring the safety of transport in London as the city lifts coronavirus restrictions. "By ensuring our city's recovery is green," he said, "we will also tackle our toxic air which is vital to make sure we don't replace one public health crisis with another."

Theo Highland of Sustrans, a UK charity that works to make it easier for people to walk and cycle, called the initiative "a potential game-changer" and echoed Khan's call for boroughs to embrace efforts to make miles of roads across the city more walkable and cycle-friendly while reducing toxic traffic.

"TfL's bold and ambitious plans to get London moving at this critical time are exactly what's needed right now," said Highland. "All boroughs must now make the changes our streets need to give Londoners space to move around safely and build our spirited city's resilience as we begin to bounce back from this pandemic."

"Sustrans is also here to help local authorities wanting to transform their streets with new infrastructure and give their residents confidence to cycle," he added. "Taking immediate action will help tackle health inequalities, air pollution, and the climate emergency. And by making successful changes permanent we'll emerge from this pandemic as a healthier, happier, and fairer London."

The Guardian reported Friday that David Miller of the C40 Cities Climate Leadership Group, which recently has helped coordinate similar plans in metro areas around the world, congratulated Khan "for showing the world what is possible when we reimagine our cities for the benefit and health of everyone."

"These measures announced in London today, including major car-free zones, will clean the air that Londoners breathe, improve public health both during the Covid-19 pandemic and long into the future, while also helping to avert the climate crisis," Miller said. "This is the future we want."

Cities at the forefront of key battles for humanity: time for a new multilateralism?