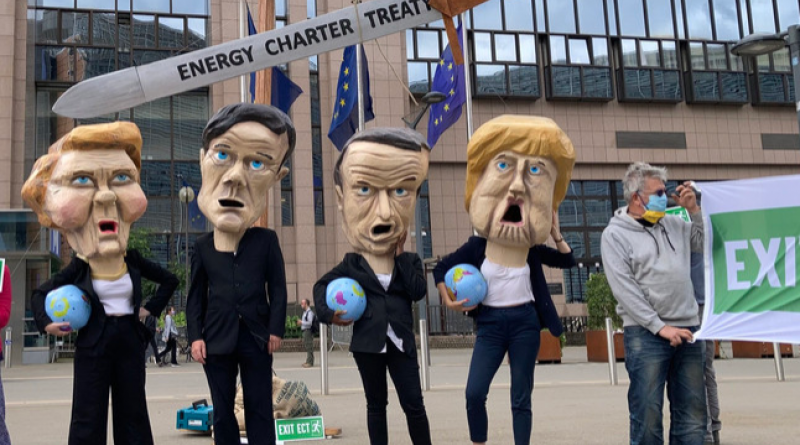 Leaked documents have revealed the "limited progress" in negotiations on a revision of the highly-controversial Energy Charter Treaty (ECT) - triggering renewed calls from environmental activists to pull out entirely from the pact, which is seen as potentially blocking a transition to clean energy.

The ECT is a 1994 international agreement that grants cross-border cooperation in the energy sector, signed by nearly 50 countries - including all EU member states.

However, multinational fossil-fuel energy companies have also used the treaty to legally lock in their investments for decades into the future, challenging national government decisions to gradually phase out fossil fuel-based energy.

In February, the European Commission, on behalf of member states, presented its proposal to gradually phase out the investment protection for fossil fuels in the treaty.

However, according to two diplomatic cables, leaked on Tuesday (6 July), none of the 54 contracting parties endorsed the EU's proposal during the fifth round of negotiations in June - with Kazakhstan openly rejecting it.

"Although the atmosphere was constructive, progress was limited, especially on energy issues" reads the leaked documents from the EU Council's working party on energy, where the EU Commission briefs representatives of member states about the negotiations.

Little progress was made on the definition of economic activity in the energy sector, despite being put on the agenda at the request of the EU.

The current definition includes all types of energy sources, but the commission proposal pushes for a 10-years phase-out of the protection for fossil fuels investments, such as coal and oil, while protecting gas infrastructure until 2040 when they are coal-to-gas conversions.

"It would be necessary to examine where the EU's flexibility could lie," it adds.

An effective updating of the ECT is seen as highly unlikely partly because any changes to the treaty would require a unanimous decision from all members - including fossil-fuel energy-exporting countries like Kazakhstan, Turkmenistan, and Uzbekistan.

The leaked diplomatic cables show that France also remains sceptical. Paris reiterated, together with Poland, that it would be necessary to prepare a concrete and coordinated EU withdrawal from the ECT - should its modernisation fail.

Spain insisted on the need to align the treaty to the 2015 Paris Agreement, while Austria, Germany and the Czech Republic appeared open to concessions to achieve a compromise.

Despite pointing out that the ECT should not prevent EU countries from making the transition from fossil fuels to sustainable sources of energy, the EU Commission believes that "the best possible outcome" is to achieve a reform.

"We will push very hard to bring about the reform. If our attempts to seriously reform the ECT are not successful, we will need to examine the possible way forward, looking at all possible alternatives, including a withdrawal," a commission spokesperson told EUobserver.

However, the treaty specifically stipulates that 'old' investments will remain protected for 20 years - even if there is a unilateral withdrawal of the EU and its member states.

Currently, all EU member states are contracting parties except Italy, which withdrew in 2016 - hoping to avoid further arbitration related to the implementation of renewable energy.

As the sixth round of negotiations to reform the ECT began on Tuesday, a group of more than 400 NGOs demanded EU leaders initiate the withdrawal process before November's UN climate talks in Glasgow (COP26).

"It's been clear from day one that this 'polluter protection treaty' is incapable of change. A number of countries refuse to make the treaty fit for a fossil-free energy system - and reject even the EU's limp proposals," said Paul de Clerck from Friends of the Earth Europe.

"We are in a climate crisis that allows no time to wait for negotiations that go nowhere. The EU and European governments have no option but to pack up and exit this harmful treaty by November," he added.

In the EU, plus the UK and Switzerland, fossil-fuel infrastructure protected by the ECT amounts to €344.6bn - of which three-quarters are gas and oil fields and pipelines.

The Netherlands was recently sued for €1.4bn under the treaty by German multinational RWE over the Dutch coal phase-out law.