California's dark, orange sky is the most unnerving sight I've ever woken up to. 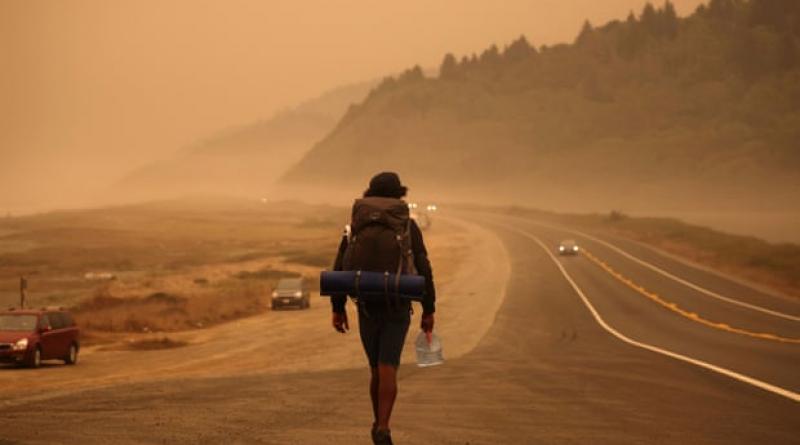 What is happening now is astonishingly worse than any previous fire season. We are in a new kind of era.

The sky was the muddy yellow of an old bruise at 7am in San Franciscoon Wednesday, and by eight it was a dull orange and the darkness that felt like night was coming on. This morning was perhaps the most unnatural-feeling and unnerving of my life, with darkness rather than daytime rolling in. People around California reported that the birds that would normally be singing were silent. On some of the days, since the freak lightning storm in the heat wave of mid-August launched this explosive fire season, the sun has been red, and when the moon was full it was also red near the horizon, but this morning there was no sun to be seen through the murk. Ash was falling, the ash of trees, forests, homes, towns, dreams burning up. In the strange light, the world around us looked ghostly, otherworldly, unnatural, unnerving, disturbing.

I know that the smoke, the light, and the heat have been worse almost everywhere else in the Bay Area from friends and family, and beyond the inner Bay Area are fires, blackouts, evacuations, and more than 14,000 firefighters doing their best against a monstrous new kind of wildfire. What is happening now is astonishingly worse than the western fire season ever has been before. There are catastrophic fires in Oregon –burning down a small town and prompting the evacuation of much of the small city of Medford. Near Oroville in northeastern California, a fire expanded by a quarter million acres in 24 hours, so far as the experts can tell. That is a new kind of fire and we are in a new kind of era.

This is the fourth year of a climate-crisis fire season amplified in duration, scale, and intensity, and it is already worse than the last three in most respects. It comes on the heels of unprecedented heat throughout most of California, with temperatures most of us never expected – 121F (49.4C) in Los Angeles County last week. I have lived in San Francisco all my adult life, which has meant living in relationship to the Pacific and its damp cool breath in the form of our famous fog. Often in summertime the rising heat inland sucks the cool air off the ocean in the form of fog, so that you can be eating soup in a sweater in a world without shadows and know that 10 miles east someone in shorts is sweating under a bright blue sky.

Lately I have not known if I was looking at fog or smoke, friend or foe, when I saw a gray sky, until I went out into it. On Wednesday, a marine layer of damp fog spread over the Bay Area with smoke atop it, creating the strange dimness that now weighs us down. Here the ocean is a beloved ally, bringing us cool fresh clean air—and most of our weather comes from over the Pacific – but we are not the ocean’s ally: the world’s oceans have soaked up most of the heat climate change has produced, with disastrous consequences, including intensified hurricanes and typhoons elsewhere. And even the ocean cannot save us now: the autumn winds – the Diablo winds here in central California, the Santa Ana winds in southern California – are due to bring scorching air from the arid east that will amplify fires. We are early in our fire season and already the records are broken.

UCLA climate scientist Daniel Swain, who tweets regularly about weather and climate said on Wednesday morning, “Everyone is so far beyond capacity right now, and there so much else going on, that I don’t think the collective bandwidth exists right now to process what it happening. I really do feel like we’re running a marathon at sprint pace right now. It is deeply exhausting.” And “Standard reporting/mapping procedures are essentially not capable of keeping pace with the unbelievable rates of spread now being observed on these fires – it is historically unprecedented.” The night before he had tweeted, “The wildfire situation in California and Oregon has now escalated to the point that I can no longer keep track of the countless massive, fast-moving, and potentially very dangerous fires.”

Pacific Gas and Electric, the utility company responsible for horrific fires in previous years, including the one that completely destroyed the town of Paradise in 2018, has been deploying its new strategy of cutting off electricity to prevent its poorly maintained equipment from starting fires in hot, dry, windy conditions. This prompted local public news station KQED to run a story with the headline, “How to Prepare for Power Shutoffs During a Heat Wave and a Pandemic.” The pandemic made us move a lot of life outdoors, but the fires create air so bad that staying indoors is safer. There we check the AQI, the air quality index, or follow the fires online. Of course for the homeless and the displaced, indoors is not so easy to come by, and during a pandemic providing emergency shelter is a far more complicated business.

Some of the people facing evacuation or worse in the Oroville-area fire resettled there after their homes in Paradise burned down. In Sonoma County people who had to evacuate in previous years are prepared to evacuate again. Californians have loved their landscapes and many of us chose to live as close to wild places as we could; insurance costs and fire danger may take that option off the table for many of us; and cities are right now the safest place to be. Some small rural communities have burned up. A farmer whose produce I have been buying for perhaps 15 years lost his buildings, including his home, and equipment on the Santa Cruz coast. His crops survived, but when I went to his booth Sunday he was hunched and avoiding eye contact, clearly stricken. The toll takes many forms from loss of life to loss of homes and communities to displacement and disruption to, even for those who are not technically impacted, the dread and dismay of living in this whole new hell.

It was 10 years ago now that Bill McKibben published a book titled Eaarth: Making a Life on a Tough New Planet. To try to explain the enormity and peril of climate change, he described the transition as though we had landed on a chaotic, hostile new planet he dubbed Eaarth. This week, with snow throughout the intermountain west fast on the heels of a wave of record-breaking heat, firestorms up and down the west coast sending huge smoke plumes across state and national borders, and a hurricane-force windstorm knocking down thousands of trees in Salt Lake City, I have thought of his book and its premise often.

An aerial photograph today would show California and Oregon mostly smothered under smoke, but politically, along with Washington, we are the blue wall of the United States, the solidly democratic region where state policy recognizes and responds to climate change. From here, under the dark orange sky, I hope that all this leads to a dramatic escalation in climate action, regionally, nationally, and internationally. It’s the only thing that can help on the scale that help is needed.