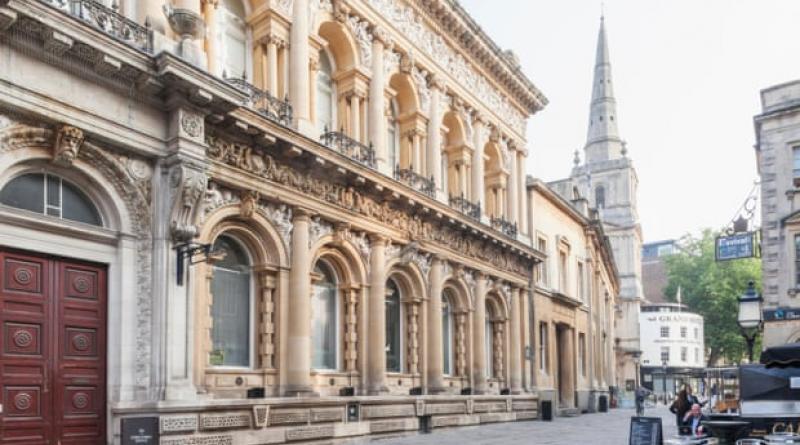 A scheme to turn part of Bristol’s historic centre into a pedestrian-only zone within months has been set out as part of plans to change how people get around the city during and after the Covid-19 crisis.

The city council hopes that by the end of the summer a tranche of the Old City area – which includes restaurants, cafes, independent shops and Bristol crown court – will be free of traffic.

Council officers have also begun work on restricting a major route for vehicles through the city centre and are drawing up plans to widen pavements to help physical distancing and improve cycle routes across Bristol.

Marvin Rees, the directly elected mayor of Bristol, said the idea was to find new ways for people to travel safely during the coronavirus crisis and to discourage them from returning to unsustainable habits afterwards.

“We have the immediate challenge of Covid now. But we also still have the challenges we had before,” he said. “It’s not just about orientating ourselves around the crisis – it’s about making sure we’re thinking about recovery and restoration at the other end.”

The plans for the Old City include pedestrianising historic streets such as Corn Street, St Nicholas Street and Small Street. St Nicholas Markets, home to quirky shops and street food stalls, is one of the attractions that could benefit.

Rees said: “We want to make the city centre a real destination. We think this is a fantastic opportunity to transform the middle of Bristol and make sure it is a thriving place in the future.

“It’s important that we do this now. Normal patterns of transport have been disrupted. People aren’t moving. It’s really important that as people begin moving again en masse they don’t go back to patterns that are 15 to 20 years out of date.

“We’re trying to rebuild the city in a way that’s fit for a whole host of challenges, taking on the challenge of Covid right here and now but also dealing with the wider challenges of social inequality, social immobility and climate and ecological emergencies. We are in a crisis but we need to think about the medium and long term as well.” 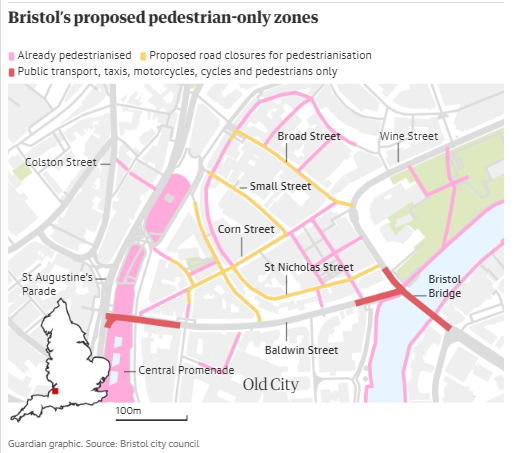 Bristol Bridge, one of the main routes into the city, is to be closed to traffic apart from public transport, taxis, bicycles, motorcycles and pedestrians. Pavements are to be widened in some of the busiest shopping areas outside the city centre including Clifton Village and Stapleton Road. Cycle routes will also be improved.

Many of the ideas were mapped out before coronavirus but the crisis has promoted the city council to accelerate them.

Rees, a Labour politician, called on the government to think further ahead. He said: “What we really want from government is predictability. At at time of turmoil what we don’t want is surprises.

“What would be fantastic to come out of this with would be a government commitment to go on a 15- to 20-year journey with us with predictable finances so we can plan and build the kind of cities the world needs.”

The council says the Old City and Bristol Bridge plans could be delivered by late summer. Over the next few weeks, the council is expected to announce further timescales for delivering the changes and said it would also to listen to people’s reservations about them.

Reaction has been mixed. Many locals are supportive but some motorists are aggrieved that it will be harder to navigate through the centre of the city.

Carla Denyer, the Green party councillor for Clifton Down, said: “The coronavirus emergency has shown us just how important it is to have room for walking and cycling. As cars begin to return to the streets and public transport faces restrictions, we need to make changes to keep everyone on our streets safe.”

But she said some streets had been left out of the plans, such as the bustling Gloucester Road. “We will continue lobbying for more roads to be added to the scheme. We would also like to see measures in quiet residential streets to create ‘low traffic neighbourhoods’ or maybe even Barcelona-style ‘superblocks’.”

Across the city, neighbourhood groups are putting forward proposals they say would improve their areas. Among them is the Redcliffe Residents Action Group & Neighbourhood Forum, which has drawn up a detailed plan to turn a dual carriageway, Redcliffe Way, into a pedestrianised shared space with new local shops, green areas and affordable homes.

The group said: “As Bristol opens up again post-Covid-19, we want to say yes to development that prioritises clean air, and makes space for nature and people to play, walk and cycle.”

Cities at the forefront of key battles for humanity: time for a new multilateralism?